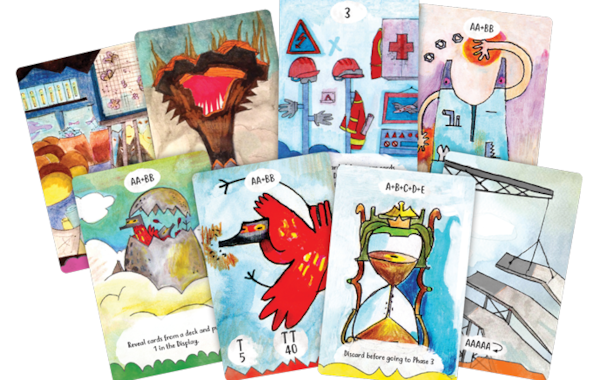 Latest game in Oniverse invites you to mix it up

The Oniverse is a collection of whimsical but strategic games set in a mysterious dreamland. They’ve been around since 2010’s Onirim, all by the same designer and artist, all for one or two players, and none with much explanation of the setting. Opening your first one feels like starting a series of novels with the third book.

Aerion, the latest, is a dice game of building sky ships by rolling dice to buy components (blueprints, material, crew) from one of six piles, by matching the score combinations they need. It’s like Liar’s Dice without bluffing, and rerolls have to be paid for by burning uncollected resource cards. Complete all six ships and you win; run out of cards and you lose.

It’s a clever game of intersecting constraints, and squeezes a lot of ideas into its small box, but ‘clever’ doesn’t necessarily mean ‘enjoyable’. The basic game is dry and unexciting, but another trait of the Oniverse games is that each one comes with several expansions in the box – six in the case of Aerion.

Once you’ve mastered the basic game you’re encouraged to mix and match these add-ons, almost at random. In fact most of the components in the box are for the expansions, not the base game. There’s a good variety, but no indication of which ones fit together best. Some recommended combinations would have been nice, but then so would having the cards pre-sorted to start the basic game, instead of having to dig through the decks to find them.

If you’re new to the Oniverse, the place to start is probably Onirim. Aerion works well – it balances chance and strategy, it’s a tight solo or two-player co-op game, and the expansions are integral to the design, not stretch goals tacked on at the end – but it makes few concessions to the new arrival in its unique universe.