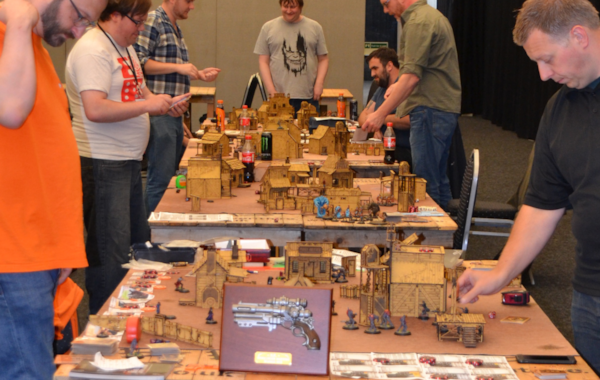 Get your war(game) face on at London convention this month

London’s hottest gaming event returns to Alexandra Palace later this month with Tabletop Gaming Live 2019! With loads of new games, trade stands, talks and play sessions, we’ve got something for every type of gamer to get stuck into on Saturday, September 28th and Sunday 29th. If you’re a wargamer you’re in for a particular treat, as you’ll get to dive into a whole bunch of demo and participation games.

Making its first ever show appearance this year is If England Were Invaded 1910. In 1906, in the febrile political atmosphere of pre-war Europe, William Le Queux wrote The Invasion of 1910, a novel about a fictional invasion of Britain by Germany. Now, over a century later, wargamers will get to act out this ‘what if’ scenario in miniature, pitting the two forces against each other with bullet and bayonet. Fittingly, the book describes the attackers training their guns on Alexandra Palace’s location – better bring a helmet just in case!

If duking it out on land isn’t your style, the show will also feature games of Wings of Glory from Ares Games. Take to the skies in the dogfighting aerial combat of the World Wars – chocks away!

Returning this year are the folks from the Milton Keynes Wargames Society. Join them to travel back to Ancient times for some historical wargaming goodness in 6mm.

If 28mm is more your scale, we’ll also be running demo games of Mortal Gods, the brand new skirmish miniatures game from Footsore Miniatures and Victrix. The game plunges players into a world Peloponnesian peril and Carthaginian carnage in ancient Greece, pitting small warbands of warriors and heroes against one another in swift, bloody combat.

Wargaming’s not just restricted to the past at Tabletop Gaming Live, or even this planet! The show will featureparticipation games of Dark Side of the Moon, a 15mm sci-fi wargame by Ground Zero Games. It’s 2039 and the moon is a hotbed of exploration, mining and development as the nations of earth look to exploit its resources. This rush for supremacy has spilled over into out-an-out conflict, however, as national powers look to stake their claim. In the game, US and Chinese forces clash for control of an abandoned lunar base, having to contend with the low-gravity environment. But perhaps there are other forces at play on that lonely orb?

Aside from games, wargamers will be able to put their brushwork to use at our painting workshops. Led by Andy Leighton of Deathwatch Studios, the man behind Tabletop Gaming magazine’s painting guides, the sessions will cater to both complete newcomers and seasoned miniature artists. Pick up the basics or expand your existing skills in our beginner-friendly tutorial on the Saturday, as Andy introduces the techniques needed to bring miniatures to life. You’ll even walk away with your own hand-painted mini to use at home!

On the Sunday, put your skills to test in a speed-painting competition. Present your finished figure to our judges for the chance to win some fantastic prizes!

Don’t miss some of the designer talks and panels running throughout the weekend, too. Games Workshop co-founder and Fighting Fantasy co-author Ian Livingstone will be delivering an entertaining tour through his life in games, talking about his struggles as an entrepreneur in the 1970s when he and Steve Jackson set up the future Warhammer titan. In Operation Thunderstrike, members of the UK Defence Academy will discuss how wargaming simulations used to train military personnel can also be used to teach language and improve critical thinking in a fun and interactive session.

These are just some of the amazing things going on at this year’s Tabletop Gaming Live – you really won’t want to miss it!

Tickets for Tabletop Gaming Live can be purchased via The Ticket Factory, with weekend passes and family bundles available – kids under 10 attend for free! Pre-order your tickets before the show to get in one hour early and start gaming as soon as possible!

What you need to know

How do I get there?

By car – The venue has free car parking offered on a first come, first served basis. Use the postcode N22 7AY for Sat Nav. Alexandra Palace is one mile from the North Circular Road (A406), five miles from the M1 (junction 2) and eight miles from the M25 (junction 25).

By underground – The nearest underground stations are Wood Green on the Piccadily line and Finsbury Park on the Victoria line.

By rail - Alexandra Palace has its own British Rail Station (Alexandra Palace Station). A regular train service runs direct from Moorgate or from Kings Cross, changing at Finsbury Park. Once at Alexandra Palace station you can take the W3 bus or walk (15-20 minutes) directly to the venue.

By bus - In addition to the W3 from Finsbury Park and Wood Green underground stations, if you are travelling from North London the 184 towards Turnpike Lane Station stops at Alexandra Palace Station. The 184 runs every 7-11 minutes Monday to Friday, 6-10 minutes on Saturday and 10-12 minutes on Sundays.

A FREE shuttle bus service will be running continuously every 10/15 minutes on Saturday and Sunday from Wood Green to Alexandra Palace Station to Palm Court entrance and back. First bus will be 8.30 daily. Last bus from the venue will be 5.15pm.

Where can I buy tickets?

Buy single day passes, weekend passes and family bundles at The Ticket Factory. Kids under 10 attend for free. Purchase your tickets before the show for early entry on both days.