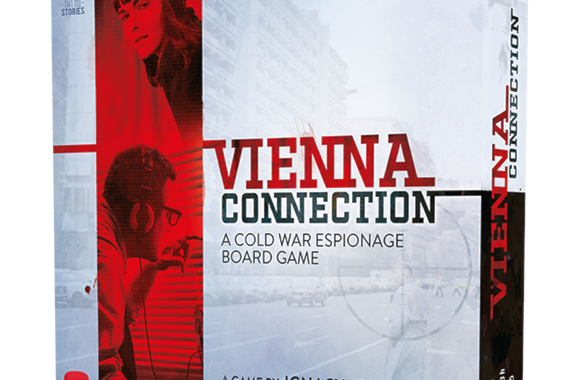 It's not even been PortalCon yet!

We only recently began the countdown to PortalCon, which promised us three new games in its opening keynote, but the Vienna Connection is the one stealing headlines in its build up, as pre-orders opened yesterday.

It sits within the Detective line of games, but is fully independent. You're going to be taking the role of spies conducting secret operations in the Cold War era, in a difference to the detective role you may have played before – but still a cooperative legacy game based around story. There are over 100 pages of different files and stores, and much like its whole range, the game places a huge emphasis on the narrative.

You'll find yourself in unique missions taking place in locations such as Vienna, Prague, and Berlin, as commander of a team of CIA agents The year is 1977, and CIA Headquarters has heard of Soviet activity in Austria, causing it to dispatch members of the Special Activities Division (SAD). That's where you, and up to seven other players, come in, in this campaign game made up of four missions.

Vienna Connection is suitable for ages 16+, can be played in 90-120 minutes, and is based on true events.

The game will not be running on Kickstarter, but Portal Games acknowledges that the pre-order options that it's offering for the next four weeks is similar to what you might have seen in a crowdfunding campaign. It allows you to receive the game before the official release date, and gain additional components and bonuses that won't be available at retail release. Plus, shipping will either be free, or subsidised.

The cost to pre-order is €45, and the release date is showing as May 2021. You'll have until February 9th 2021 to pre-order, and can do so over on the Portal Games website. However, Portal Games, due to Brexit, are currently not shipping directly to the UK, so it may be worth checking with FLGS for alternative ways to pick up this new game.