What do a T-Rex, Madam Mim, and a cold case have in common?

Toy Fair London 2022 went ahead this year, unlike it’s Nuremburg and New York sister shows, and we were there to enjoy it in all its glory.

While the show is usually a mix of the big players in the toy and collectables scene, and those in our hobby, this year saw a big push towards the games market – with big players from Ravensburger, Goliath, Gibsons and Funko offering a peek at exciting new games. With that, here’s some of our favourites:

While many are extremely excited for the newly introduced Pixar baddies in the form of Lotso from Toy Story (and demo mode Buzz Lightyear) and Syndrome from The Incredibles, our favourite of the new line up was Madam Mim ­– from Sword in the Stone.

Like other entries in the series, each villain will offer a deck of cards, a fold out deck, and the much loved abstracted miniature-pawn to represent them on the board.

Read our review of a former expansion, Perfectly Wretched, by clicking here 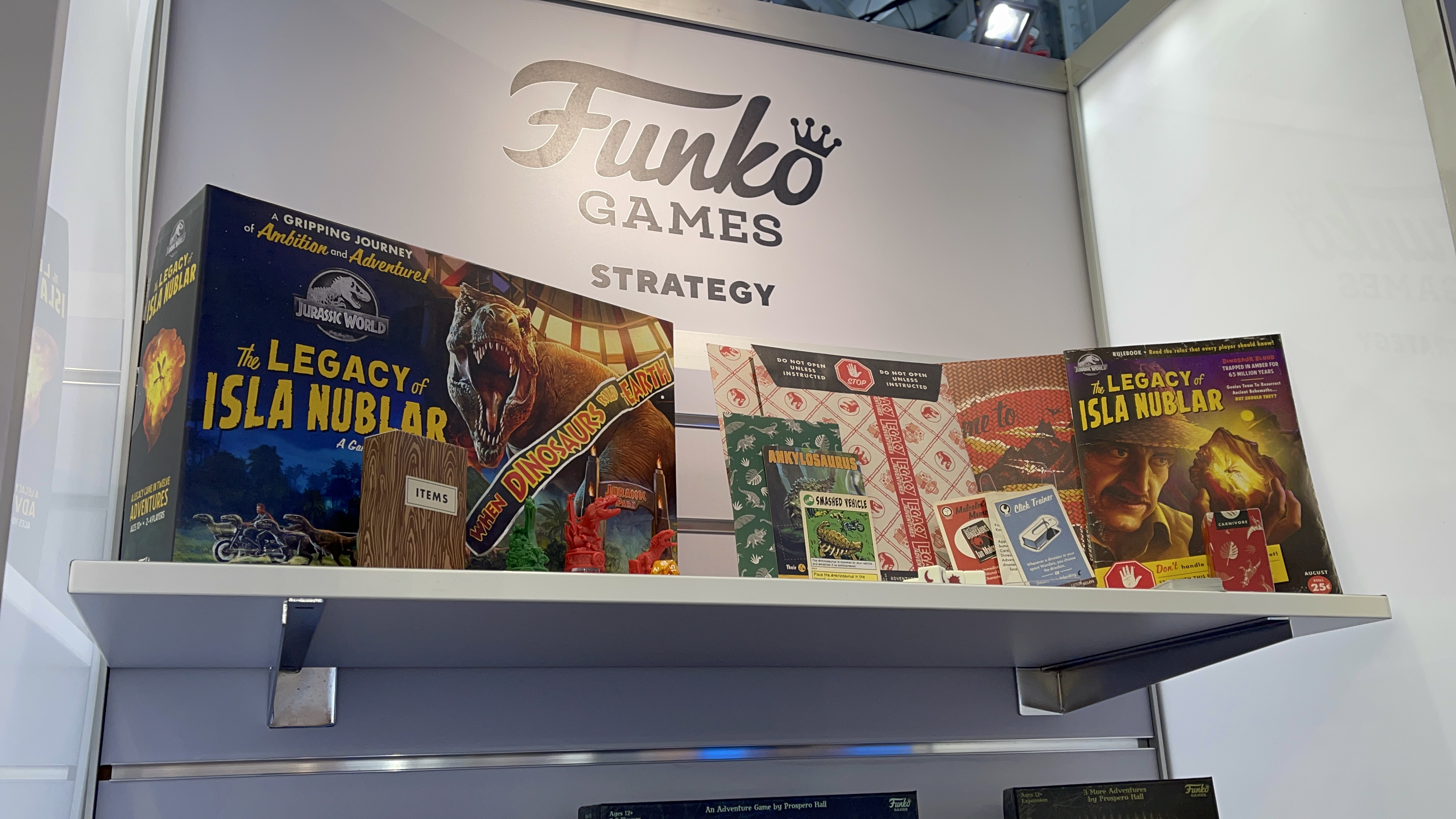 Amongst the huge number of excellent and amusing ‘Pop’ renderings of our favourites from the page and screen, there was a frankly giant box lovingly adorned in 90s-alike packaging for Jurassic Park: The Legacy of Isla Nublar. This game, coming to Kickstarter later in the year hopefully, is a huge 24 hour plus legacy game taking in the first three Jurassic Park films as its source material. The presentation cannot be overstated, classic comicbook styled cards, a series of legacy boxes with notes on the outside like “carnivore” and the promise of polish that the design team Prospero Hall can guarantee. We’re expecting a box at around £100, but that is yet to be confirmed.

Did you also see the brand new Funkoverse announcement? Click here for more

Back on Kickstarter, the place where it all began, will come Exploding Kittens newest game, Hand to Hand Wombat. The outlines of a prototype were all that was available on the day to take a look at, described as a game of 'teamwork, towers, and trouble makers', a hidden identity game that sees one person as a bad wombat, sabotaging (without being caught) the fellow player wombats attempts to build a tower from the components provided. It proves to be a dexterity based game with all of the usual humour and wit we've come to expect of them. If that wasn't enough, there are plenty of new releases to watch out for – Mantis, a game of rainbows and revenge, Zombie Kittens, a zombie take on Exploding Kittens, and Happy Salmon, the Exploding Kittens re-do of the original version.

We interviewed Exploding Kittens about their journey from beginnings to now, and you can read that Studio Profile here. 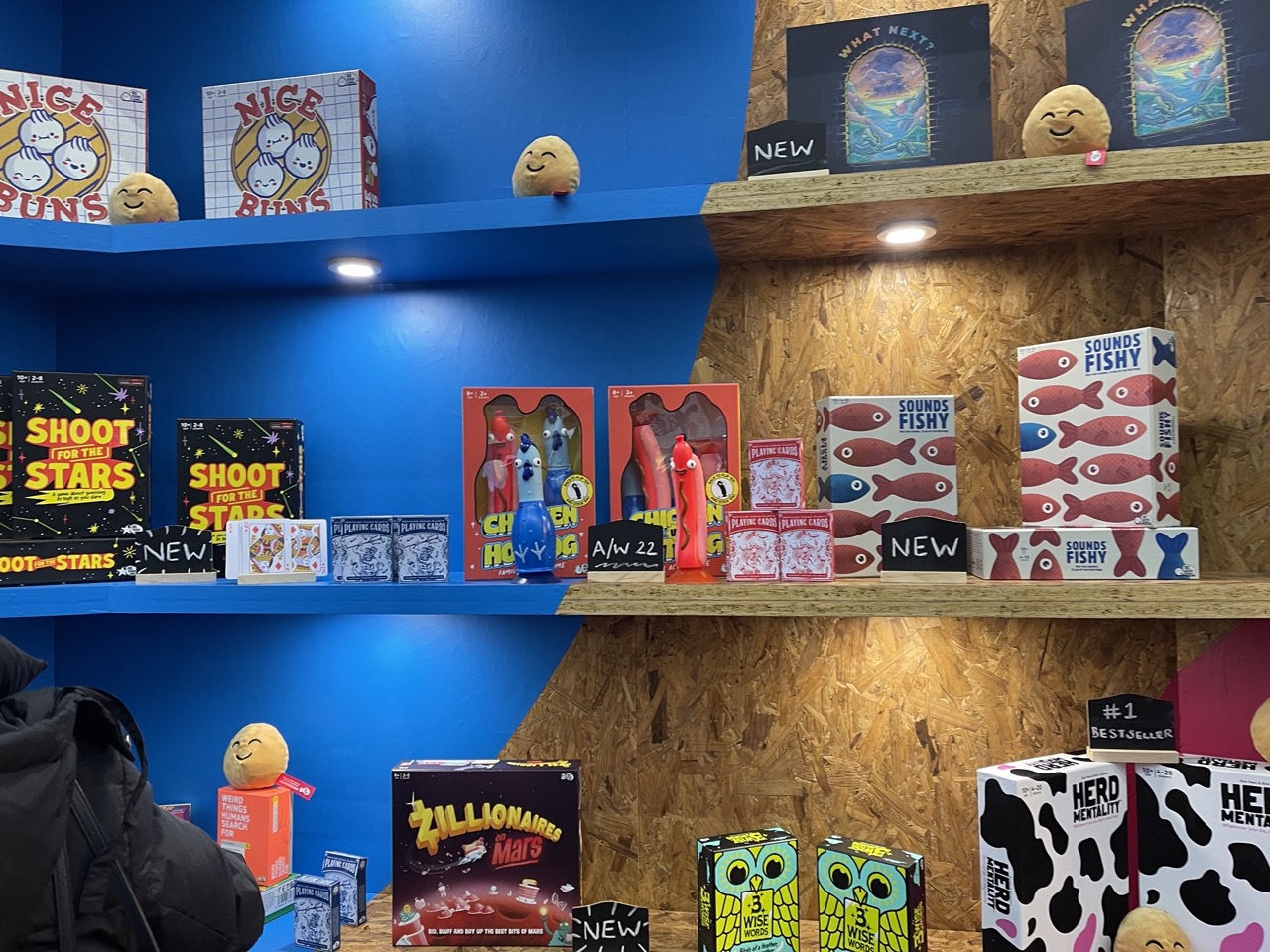 Big Potato Game has certainly been ramping up its available games over the last few years, and there was plenty to share at its brightly coloured Toyfair home. From the news of its Jackbox-like online game service, Big Screen Games, expanding further later this year, to the release of games such as Sounds Fishy, a social deduction game that has you placing a red (sparkly) herring into the midst with your questions, or a trivia based bidding game complete with spaceship centrepiece named Shoot for the Stars, there's a steady stream of releases for the next year. However, labelled the "most stupid idea" is the coming to fruition of Chicken vs Hotdog, a game that provides you with (surprisingly) a chicken and hotdog with suction cup bottoms, that you'll flick onto surfaces in the hope it lands the right way up. It's the gamification of the bottle challenge, and whilst co-founder Dean Tempest made it look easy, subsequent TTG attempts proved it certainly isn't!

Continuing the large-scale French invasion, Hachette brought a huge number of games to the show – including the extremely charming wooden abstracts that really ought to be on most pub shelves. Our pick from the stand however is the yet-to-be-translated Amelia’s Secret, an augmented reality horror game that asks players to place a variety of large symbol-laden cards around the house. Pop one on your sink (or near it, if you’ve still got washing up to do) and point a tablet at it. Magically your dishes are gone, and instead there’s a creepy sink of blood. Each set up offers a piece of the puzzle that’ll lead you – we assume – to uncover Amelia’s secret.

From Vivid Goliath (purveyor of excellent kids toys and games, such as the extremely funny Gobble Monster we’ve seen a big push into the more complex end of the hobby. While Goliath has offered multiple Escape Room boxes in the past, the new line of Casefiles games looks to offer a crunchy-but-still-light approach to sleuthing. While we were only able to see prototypes, the new games are based on the popular counting-the-dead-bodies (i.e. true crime) podcast of the same name. We’re expecting a lot of accessible murderer hunting later this year.