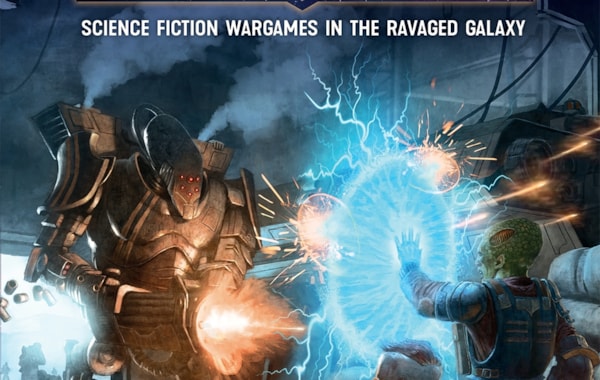 From Frostgrave to Stargrave!

We heard a little while back that there would be a brand new adventure from Joseph A. McCullough, the creator of Frostgrave.  As a multi award-winning writer, it's no surprise there's more to come, and with that we go from Frostgrave to Stargrave: Science Fiction Wargames in the Ravaged Galaxy.

Due to hit the shelves in April 2021, Osprey Games have now unveiled the cover of the new game, featuring artwork by Helge C. Balzer. It also confirmed that it'll be supported by an official range of miniatures created by North Star Military Figures and Osprey Games.

Joseph A. McCullough said of the cover: “I think Helge C. Balzer has really captured the feel of the game with this cover. You’ve got big stompy robots, aliens using psychic powers, and battle-armoured soldiers, blasting it out in a dark, industrial setting!”

To describe Stargrave itself:

In a galaxy torn apart by the Last War, vast pirate fleets roam from system to system, robbing, extorting, and enslaving. Amidst this chaos, thousands of independent operators – smugglers, relic hunters, freedom fighters, and mercenaries – roam the dead stars in small ships, scratching out a living any way they can.

In Stargrave, players take on the role of one of these independent operators, choosing from a range of backgrounds each with their own strengths, weaknesses, and associated powers. Next, players must hire a crew for their ship, recruiting a lieutenant with a unique skill-set and a handful of soldiers, mechanics, hackers, and other specialists. Some captains may even recruit strange alien lifeforms with abilities no humanoid could ever possess.

Once the players’ crews are assembled, they are ready to dive into a campaign. Over a series of games, their crews will have the chance to carry out a variety of missions – recovering lost technology, stealing data, freeing slaves, and fighting back against the pirate fleets. In time, as the crews gain experience, they will become more powerful and hire more talented specialists. The more they grow, however, the more likely it is that a pirate fleet will take note of their activities and come after them!

There's more to come in terms of artwork and information from next Friday, so keep your eyes peeled for this new adventure!

Plus, if you like this you may be interested in seeing Joseph McCullough at Virtual Tabletop Gaming Live, with tips for Wargame Designers!