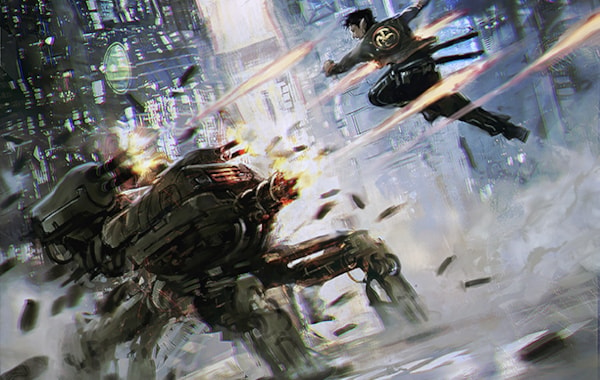 One of the most influential sci-fi roleplaying games of all time, Shadowrun, is returning with its first major new edition in six years for the RPG’s 30th anniversary.

Shadowrun: Sixth World is the cyberpunk-fantasy RPG’s sixth edition, following the release of its fifth edition back in 2013. In keeping with the RPG’s near-future setting of being 60 years and six months ahead of the present day, Sixth World will take place in 2080.

Sixth World will kick off with a beginner’s box planned for release this June, which will contain an introduction to the long-running game’s universe, quick-start rules, a Seattle-set adventure called Battle Royale, four pre-generated characters, 55 gear cards for quickly checking equipment stats, maps and ‘handfuls’ of six-sided dice.

While publisher Catalyst Game Labs describes the sixth edition as being “easier to learn and play” than previous iterations of the RPG, Sixth World will stay true to the d6-powered system of Shadowrun’s fifth and fourth editions, where players roll dice based on their attributes and skills and count 5s and 6s as successes.

Other notable changes include a reworking of the Edge system to trim down combat and action modifiers and make combat faster to resolve, the removal of limits and a general streamlining of skills and spells to speed up play and make it less crunchy.

Ahead of Sixth World’s release, a new novella set in the world of Shadowrun, The Frame Job, Part 1: Yu, has been released. Penned by Shadowrun writer Dylan Birtolo, the story focuses on the characters found in the beginner’s box and – as you’d probably guess from the ‘Part 1’ bit of the title – is the first in a planned series of fiction based on the game.