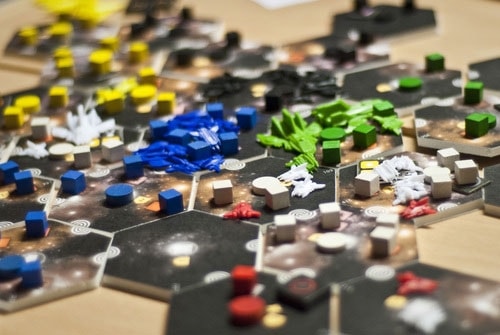 Eclipse is one of the most iconic sci-fi board games ever made, a sprawling 4X strategy game of duelling fleets of spaceships, mysterious alien races and a galaxy of planets to explore.

Next year, Touko Tahkokallio’s masterpiece will return with a massive second edition, overhauling Eclipse with a brand new look and tweaked gameplay six years after it made its debut.

Chief among the improvements in Eclipse: Second Dawn for the Galaxy will be a refreshed graphic design for the game, which publisher Lautapelit.fi insists will preserve the iconic symbology of the original while marking the second edition apart from its predecessor.

Adding to the visual oomph of the revamped game will be new miniatures for the game’s ancients, GCDS and orbitals, with the 108 plastic ship models previously released as a separate upgrade pack for the first edition now included in the box.

There’ll also be custom dice replacing the yellow, orange and red cubes used to resolve combat, and all of the new components will come safely housed in custom plastic box inlays.

Introducing the sci-fi universe of Eclipse will be a new short story penned by Finnish sci-fi novelist Johanna Sinisalo, who won last year’s Prometheus Award for Best Novel for her work The Core of the Sun and was previously nominated for a prestigious Nebula Award.

In news that might allay fears of Eclipse fans who consider the original game’s mechanics near-perfect, it appears that Second Dawn for the Galaxy will leave the gameplay largely untouched, with Lautapelit.fi saying it will simply be ‘fine tuned’ for the second edition.

“Since the launch of Eclipse in 2011, the game has had a wide and inspiring fan community that has actively provided feedback to use and the designers both directly as well as through online communities,” the studio said in its announcement.

“The second edition is a response to those hopes and wishes with no effort withheld.”

Eclipse: Second Dawn for the Galaxy will be released sometime in 2018.