A rose by any other name…

Anvil Industry has previewed some new Sisters of Batt…er… I mean Daughters of the Burning Rose miniatures.

The big new outing are the new bipedal mechs, boasting a brutal-looking chainsaw and flamethrower combo, as well as a creepy impassive mask.

Of course, it’s only a coincidence that these miniatures look somewhat (ahem) like the old Games Workshop penitent engines; close-combat machines piloted by sinners atoning for their crimes.  There’s also a blind not-astropath and a scythe-wielding female Grim Reaper.

Daughters of the Burning rose is an ongoing Kickstarter project from Anvil Industries, a London-based miniatures company specialising in produces 28mm Heroic Scale resin conversion bits for human soldiers.  Their big thing is that all their parts are interchangeable with one another; pieces are broken down into your standard heads, torsos, arms, legs, weapons and accessories, and can all be combined with one another to create a unique looking miniature. Your humble writer has personally been eying their range of WW1-esque trench figures for some time (gotta love them pickelhaubes!) 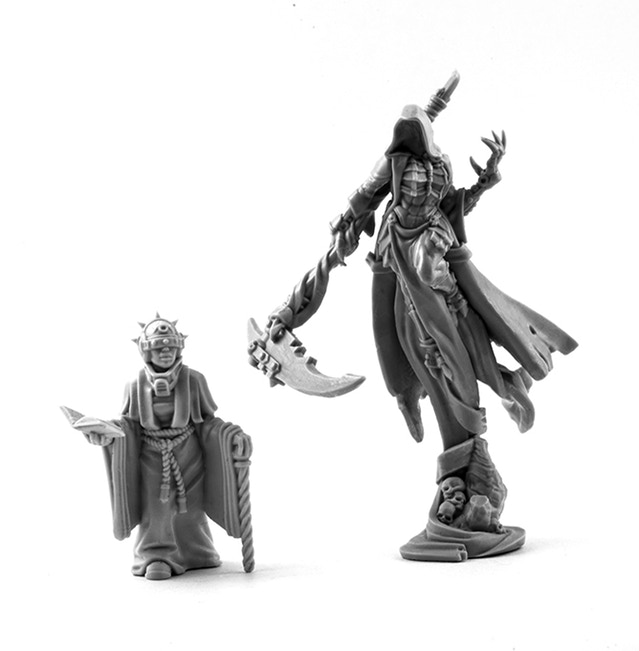 The main line of figures in the Kickstarter are the titular Daughters. Wielding machine guns and clad in gothic, medieval-looking power armour (which, for the most part, mercifully avoids the ridiculous “boob-armour” look), the line looks like it’s set to scratch the Sisters of Battle itch for players who’ve gotten bored of waiting for GW to stop coquettishly teasing their own revamp and put the figures out already. Of course, technically speaking, both companies have already been beaten to the punch somewhat, but hey, more variety’s always a good thing I guess.

For more information, you can check out their website here or the Kickstarter here.