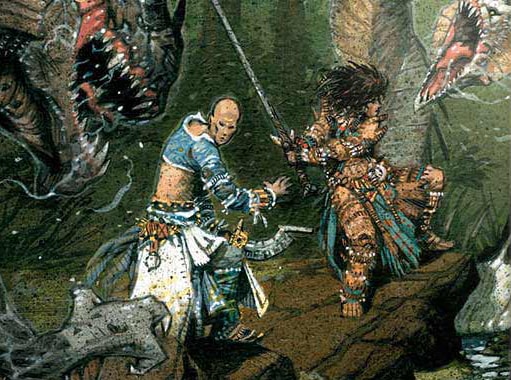 One of Pathfinder’s most boundary-pushing Adventure Path campaigns is getting a re-release for its 10th anniversary.

Kingmaker was originally released in 2010 and was co-written by Ed Greenwood, best known for creating Dungeons & Dragons’ Forgotten Realms setting.

The six-part campaign was notable for its focus on open-world exploration and kingdom-building, allowing players to build up their domain and deal with the challenges of being a ruler, from engaging with rival leaders to dealing with roving bandits. It also pioneered new gameplay mechanics for the RPG, such as engaging in mass combat using your kingdom’s army, support for hex-map exploration and managing the economic aspects of running a kingdom.

The campaign was adapted for Pathfinder’s first computer roleplaying game, also called Kingmaker, which launched on PC at the end of last year.

The upcoming 10th anniversary edition of Kingmaker for Pathfinder will bring the tabletop campaign to the second edition of the fantasy RPG, featuring updated rules and expanded content apparently based on feedback from players – extra characters, plot lines, appendices and more are all mentioned, as well as a brand new prologue chapter.

As well as the core campaign book, there’ll also be a Companion Guide inspired by the Kingmaker PC game and a Bestiary for Pathfinder’s first edition, which converts the new monsters, allies and NPCs in the expanded collection back to the original tabletop RPG’s ruleset.

Kingmaker will also be coming to Dungeons & Dragons’ fifth edition in the form of a separate Bestiary for that RPG (which the original Pathfinder span out of), converting monsters and “key NPCs” for D&D campaigns.

All four books in the new Kingmaker collection are planned for release ‘late’ next year to time with the campaign’s 10th anniversary in 2020, and are currently up on crowdfunding site Game On Tabletop, where the base $50 (£38) tier will get you PDF versions of the Adventure Path for Pathfinder: Second Edition and the Companion Guide.