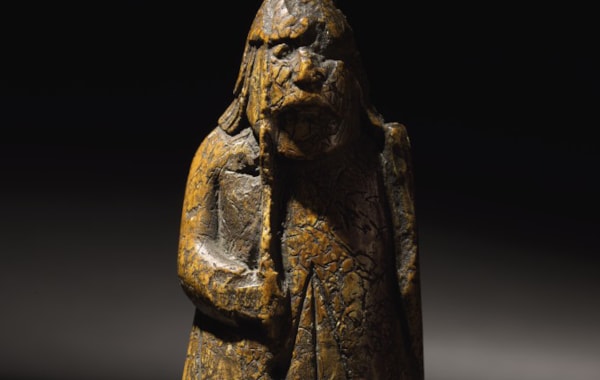 Missing Lewis warder found in a drawer after 50 years

A figure from perhaps the most famous chess set in the world – the Lewis chessmen – has been rediscovered in a drawer, more than 50 years after the valuable medieval artefact was bought for just £5.

The warder piece, which is made from walrus tusk and approximates a rook in modern chess sets, is the first new piece of the medieval set to be confirmed as genuine in almost 200 years, following the initial discovery of the chessmen in 1831 on the Isle of Lewis in the Outer Hebrides, from which they take their name.

The piece was sold to an Edinburgh antiques dealer for a fiver in 1964 (the equivalent of roughly £100 today), before passing down to his daughter who kept it wrapped in a bag in a drawer. As part of its rediscovery, the Lewis warder has been valued by auction house Sotheby’s at between £600,000 and £1 million when it goes under the hammer next month.

It will mark the first time that a Lewis piece has been sold at auction – of the almost 100 artefacts recovered as part of the 1831 discovery, the majority are kept in the British Museum, with the remainder stored in the National Museum of Scotland. The warder’s discover leaves five pieces from the almost complete collection of four chess sets missing.

The Lewis chessmen have inspired the likes of the enchanted chess set in Harry Potter and the Philosopher’s Stone and the Norse lore of 1960s TV show Noggin the Nog since their discovery. The pieces are believed to have been crafted sometime in the 12th century in Norway before finding their way across to the Isle of Lewis – how the missing piece then ended up separated from the rest of the collection remains unclear.

The piece will be offered at auction as part of Sotheby’s Old Master Sculpture & Works of Art sale on July 2nd.