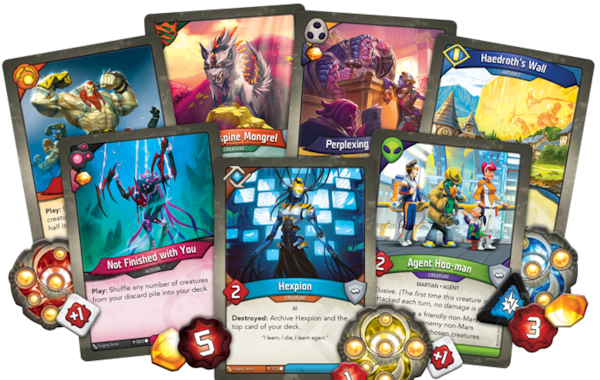 KeyForge, the ‘unique’ card game from Magic: The Gathering creator Richard Garfield where no two decks are alike, is expanding with its second set.

As well as the brand new cards, Age of Ascension decks will mix in 166 cards from Call of the Archons, making its own card pool 370 in total. Returning cards will have new card numbers, but will otherwise be identical in look and effect to their appearance in the previous set. Fantasy Flight has said that Age of Ascension decks will never consist entirely of cards from Call of the Archons.

Other cards from Call of the Archons now have the possibility of appearing as new ‘legacy’ cards, which see the cards placed in new contexts and combining with Age of Ascension cards in different ways. The cards will be similar to the rare maverick cards, which place cards into different houses – and will continue to pop up in Age of Ascension decks.

Age of Ascension’s cards introduce multiple new keywords to the game, including ‘Alpha’, which designates cards that must be played first during a turn; ‘Omega’, which requires them to be played last; and ‘Deploy’, which allows cards to be inserted into the middle of a player’s battleline of cards instead of placed on the end ‘flanks’ as normal.

Despite the new abilities, Age of Ascension’s decks are said to be fully compatible and balanced against decks from Call of the Archons, with the two sets able to play against each other freely.

As with Call of the Archons, KeyForge’s Age of Ascension set will launch with a two-player starter set when it’s released in Q2 of this year. Unlike Call of the Archons, though, the set won’t include two universal learning decks, and will come with tokens for stun and increased power status instead of the previous set’s cards. Alongside the starter set, Age of Ascension decks will be released as individual archon deck packs.