Geek Chic, one of the first big custom gaming table makers, has gone out of business 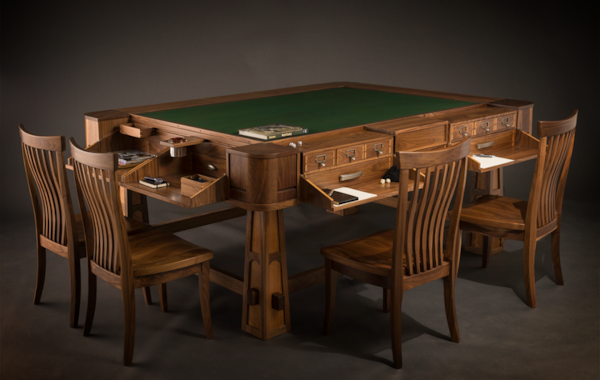 One of the best-known makers of dining room tables designed specifically for tabletop gaming has closed its doors.

Geek Chic started up in 2008, initially offering a single piece of furniture – the ‘Sultan’ – and growing over the years to expand its offering to cover a number of dining room and coffee tables, chairs, bookcases and sideboards.

All of the products were built to order, could take multiple months to craft and could be customised by buyers with specific wood, cup holders, dice cups and other accessories.

Despite positive online reviews from owners of their tables, it looked like Geek Chic may be in trouble earlier this month, when those who had pre-ordered tables began to express concern over a lack of communication from the company, including emails bouncing back from the customer support team.

After a short period of silence, company owner Robert Gifford announced that Geek Chic had ceased operation in a short statement, adding: “Despite heroic efforts by many, this outcome is out of our hands.

“While I am certain there are many outstanding questions, we are currently limited in our ability to respond. The website will be updated with appropriate contact information and procedures as they become available.”

That’s sure to be of little comfort to those expressing concern on forums such as Reddit that have thousands of dollars wrapped up in the sinking company, as they await to hear the fate of their pre-order money.

Geek Chic was one of the first companies to begin offering custom-made tables engineered for gaming, a trend that has since been taken up by rival firms such as Geeknson, BoardGameTables, Carolina Game Tables and Rathskellers.

Gifford appeared on US TV show Shark Tank – the American equivalent of Dragons’ Den – in 2012 and was successfully offered $300,000, accepting the deal before backing out off-air.

In early 2016, the table maker acquired board game publisher Crash Games, which was later made defunct.