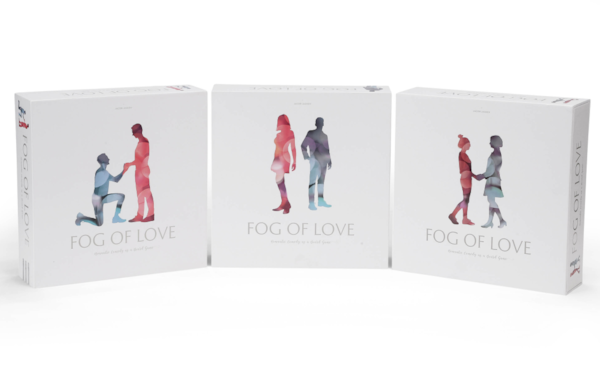 Romantic roleplaying board game Fog of Love is taking steps to improve its depiction of LGBTQ relationships with two alternate box covers, improved inclusiveness in the game’s storytelling and a new expansion from prominent designer Nikki Valens.

The original version of the relationship-simulating game included the ability for players to roleplay freely as heterosexual or same-sex couples, but attracted some comments about the finer details of certain events and story beats that creator Jacob Jaskov said felt “awkward” when experienced as an LGBTQ couple or player.

“We wanted to make the original game as inclusive as possible,” he said. “However, I’m a heterosexual male and no matter how much I tried, there were a few details I was bound to miss or be inadvertently blind to.”

Among those who felt like Fog of Love was missing something was Valens, the co-creator of Eldritch Horror and former Fantasy Flight designer behind Mansions of Madness: Second Edition, Arkham Horror: Third Edition and Legacy of Dragonholt, who said “something felt a bit ‘off’ to me” during her first playthrough.

Jaskov approached Valens to help improve the game’s treatment of LGBTQ topics and themes, rewording parts of its narrative and reworking scenes to ensure they were just as meaningful and reflective for any relationship. One notable example is a story beat in a scenario that previously required one of the couple to become pregnant in order to have children, which has been expanded with the option to adopt.

Other changes include the addition of three new scenes that Jaskov said in a Reddit AmA “support expression of attraction and gender in new ways”, with better consideration of both polyamorous relationships and asexual preferences across the entire game.

The revised content will be included in Fog of Love’s upcoming reprint due in “coming weeks”, which will also see the debut of two alternate box covers for the game featuring same-sex male and female couples in place of the original male and female figures. The original cover will remain available, and all three editions of the game will feature identical content.

Jaskov added that the team is looking at ways to make the updated cards available for existing owners of Fog of Love, saying that it was “highly likely” that the LGBTQ content would be released separately next year.

As well as the revised main game, Valens is designing an LGBTQ-focused expansion that will concentrate on “telling stories about queer relationships”, said to be based on her own and shared experiences as a member of the queer and transgender communities.

“I wanted to tell stories of self-discovery, transition, and also non-sexual or non-romantic intimate relationships,” she said as part of the AmA. “I'm working hard to make all of these possible.”

The currently untitled expansion is expected to launch in the first quarter of 2019, following the release of three previously Kickstarter-only scenarios for Fog of Love next month.