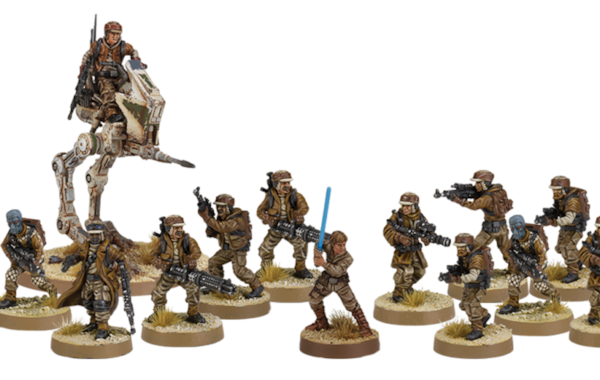 ‘We're trying to do what we can to try to get more women on the battlefield,' says head of studio

Fantasy Flight has dismissed concerns that its upcoming Star Wars miniatures game, Legion, would not include female characters.

Speaking to Tabletop Gaming, lead designer Alex Davy acknowledged that fans had expressed worries over the apparent absence of female Rebel Troopers from the game’s core box, but clarified that several of the 33 models in the set, which also includes Stormtroopers, Speederbikes, an AT-RT walker, Darth Vader and Luke Skywalker, would be women.

“The Rebel Troopers that come in the core set, you get two units of them, and of the seven sculpts, two of them are female and one of them is an alien,” he explained. “Certainly in the Rebel forces we want to continue to push that diversity; to have not only more women in the forces but also aliens of every species that you can imagine.

“That's a big part of what's so cool about the Rebel Alliance: you look around in the Battle of Endor, you have that big meeting before the battle and it's incredibly diverse. Not just in terms of gender, but also in terms of species, race, ethnicity... That's part of what makes Star Wars so cool, is that there are all of these different creatures and people from all over the galaxy. We're definitely going to present that in Legion, because who doesn't want to sculpt a bunch of cool aliens and have all that stuff represented on the tabletop? That's definitely something we're going to continue to do and perhaps do even more emphatically going forward.”

The publisher's studio head Andrew Navaro hinted that future expansions would introduce additional female characters, potentially including named heroes such as Leia, saying: “If you're familiar with our stuff and what we do, you can probably make some pretty solid assumptions about female characters and which female characters might be in the game at some point.

“I think gender diversity in wargames is obviously something that is an issue for a lot of people, and we're trying to do what we can with Star Wars to try to get more women on the battlefield,” he continued. “It's one of those things where when you look at trying to do the licence justice, like what you're trying to do with using the reference material, it's challenging because those are mostly men out there on the field. So we're trying to get women in each unit, as far as I'm aware. At least one or two women.”

Davy suggested that the confusion over whether some of the Rebel Troopers in Legion’s core set are female could be seen as a positive sign of the characters’ realistic representation.

“It's hard to tell at first glance,” he said. “I think that's actually to our credit, because we haven't exaggerated their proportions, they just look like people wearing ponchos and gear.”

“Right,” Davy agreed. “So when you have the sculpt in your hand it'll be pretty clear the way that we've done that, but if you're just looking at pictures it can be– it's subtle, which I think is to our credit, actually. But it is something I'd like to clarify, that there are specific female sculpts and there will be many more to come.”

As for whether the Stormtroopers are similarly diverse?

“Stormtrooper armour means you can't tell at all!” Navaro laughed.