To kick things into Hero Mode

In a new board game from Spin Master Games, comes the announcements of Disney Sidekicks Board Game. Designed by Eric Lang, and available from August 1st, 2021, this game puts the sidekicks of popular Disney films in the hero seat, letting you play as beloved characters that don't tend to take centre stage.

These include Timon & Pumbaa, Tinkerbell, and Abu, amongst others whose heroes have been captured, and its up to the sidekicks to rescue them. It'll be a cooperative game, where you'll travel through the game board, fight villains, rescue villagers, and collect locks to open the castle and free the heroes by defeating at least one villain inside. 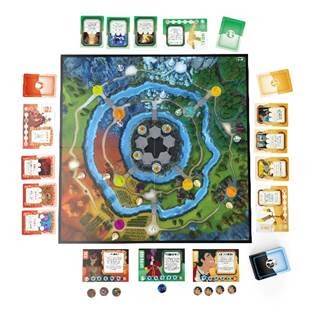 So which sidekicks can we expect to see? There'll be the aforementioned Timon & Pumbaa, Tinkerbell, and Abu, as well as Lumiere, Flora, Fauna, and Merryweather. They'll be fighting against the villains of Captain Hook, Gaston, Scar, Jafar, and Maleficent

It'll be for 2-4 players, and pitched as a family friendly game. On his Twitter, after announcing the cover and a short press release, Eric Lang promised further information to come soon, and with a release date of August 2021 in America, it certainly won't be far off.

Spin Master Games are of course a children's entertainment company, spanning toys, digital games, and the tabletop. Eric Lang is well known for a plethora of games he has designed or had a part in- Blood Rage, Rising Sun, Chaos in the Old World, Cthulhu: Death May Die, Arcadia Quest, Bloodbourne the Board Game, and many more.