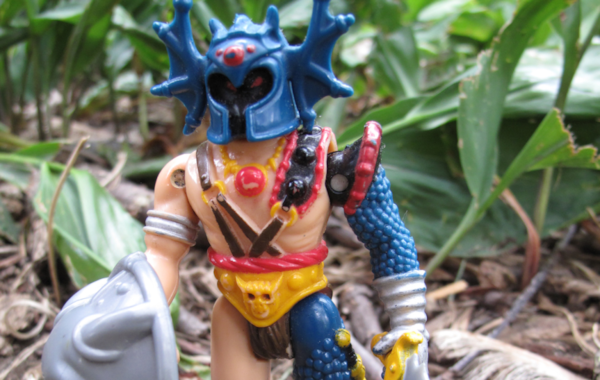 A cult character from Dungeons & Dragons lore could be making a return to the fantasy roleplaying game.

Warduke first made his way into Advanced Dungeons & Dragons as an action figure released in 1983. (A 1984 update gave the toy ‘battle-matic’ action, while Warduke also got a steed, Nightmare, as an accessory.)

Along with several other ‘80s D&D action figures, Warduke was fleshed out as an eighth-level fighter in the 1984 adventure Quest for the Heartstone, having also appeared briefly as a special character in the Shady Dragon Inn supplement the year before.

After a few years appearing here and there in various Dungeons & Dragons merchandise – including shrinky dinks, 3D holographic stickers and even a Halloween costume – Warduke faded from wider D&D consciousness.

The character made a return in a 2003 issue of D&D magazine Dungeon, where future Pathfinder designer Erik Mona brought back Warduke as the result of his own childhood nostalgia, bumping his stats up to that of an 18th-level fighter complete with a flaming sword and clad in ceremonial armour to intimidate his foes.

Warduke’s last notable appearance was as a figurine for the War Drums set of the Dungeons & Dragons Miniatures game, based on his Dungeon magazine characteristics.

Now, the fan-favourite character could be due for a comeback in an upcoming adventure for Dungeons & Dragons’ Fifth Edition, as principal story designer and fellow Warduke fan Chris Perkins revealed to Tabletop Gaming.

“This could be seen as a bit of a spoiler, but do you remember the character Warduke?” Perkins told us while discussing future plans for the RPG. “He was an action figure that TSR made. One of several D&D action figures that came out early in the '80s. And, of course, being early '80s action figures they kind of sucked – bad paint jobs and very sort of rigid and not very attractive. But I remember loving that character as a kid. He first showed up in an adventure called Quest for the Heartstone, which was an old D&D expert-level adventure with pre-generated characters. There was one piece of art of him that kind of stuck in my mind. I've never been able to shake it.

“And so we're actually talking about bringing this character who was an action figure back into a future story. Nobody's out there saying that they want it, but the story is really cool and this character just fits so nicely into it, that when people see it they're going to go: 'Who is this guy?' 'Where did he come from?' And then they're going to look back in the lore and go, 'Oh my god, there's like an action figure of this guy!' And it'll slowly peel itself away and you'll realise, ‘Oh, this was here all along and we didn't know it.’”

Perkins said that Warduke’s potential return reflected the D&D creators’ interest in bringing back other characters and stories from the game’s long history in an expanded form – just as this year’s Ghosts of Saltmarsh updated first-edition scenarios and lore elements for the latest version of the RPG, alongside new rules for ship combat.

“It's a fun exercise when you've got 40-plus years of lore and stories behind you. D&D is now a multi-generational game. I think there's to some extent an obligation – I don't mean that as a negative – to look back and see what's there that we can pull forward, just to keep these cool things in the consciousness of the D&D community,” Perkins said.

“So we're always kind of reaching into the past to try to pull forward things that we think are still resonant, or that we can contemporise and sort of put a spin on so that you can kind of see it in a new and refreshing way. A lot of the stories we've told with Fifth Edition have certainly endeavoured to do that. For me, it's always a pleasurable exercise to look back and see what can be pulled forward. Often, it doesn't start with, 'Hey, let's go to the past and see what we can make a story out of.' Usually, it's, 'Hey, we have a story. Now let's go into the past to see what we can bring back to fit into that story.'”

Perkins said that part of the aim was to surprise players with elements of Dungeons & Dragons that they might have missed – or simply forgotten.

“That's the kind of thing I'm kind of looking for in future stories: this real sense of discovery. There are things out there in D&D's past you have no idea that they exist. And they're cool and they're neat and they inspire. I feel it's incumbent upon us to help find those things,” he said.

“For me, I always want to do things that have kind of a surprise to them. Like, ‘Oh my god, I can't believe they went back and found that!’”