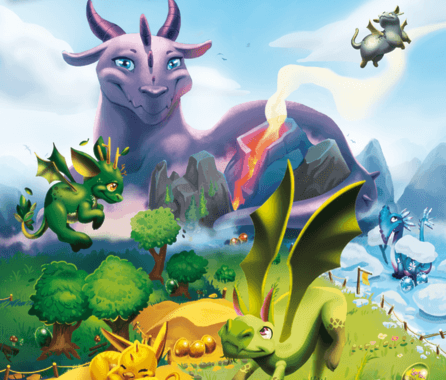 The Kingdomino spin off proves to be a hit

Dragomino, a game by Bruno Cathala, Marie Fort and Wilfried Fort, published by Pegasus Spiele and Blue Orange, has been awarded the coveted Kinderspiel des Jahres 2021.

The award is part of the Spiel des Jahres, the german awarded Game of the Year, with later accompanying awards the Kinderspeil and Kennerspeil, for children's games, and more complex games respectively.

The jury who decided on Dragomino victory said the following:

"“Dragomino” is an impressive example of how you can turn a family game into a children’s game. This sister game to “Kingdomino” brings an interesting fantasy atmosphere to the table. Children will feel confident playing after just one game. The clever balance of luck and tactics means children will always want to dive into the world of the domino dragons."

The game sees you trying to find baby dragons after being named a dragon trainer. The problem is, you're not the only one, and you'll need to try to find the most! The mechanics are that of Kingdomino, with a dragon related flavourings, making it an easy to understand game for children and adults alike.

And whilst this is exciting news for children's games, there's more to look forward to with the other awards being announced later in the year, on the 19th July 2021, so keep your eyes peeled to find out the overall game of the year, and the the connoisseur or expert game of the year.

You can read about the original nominations by clicking here, or check out the video run through below.