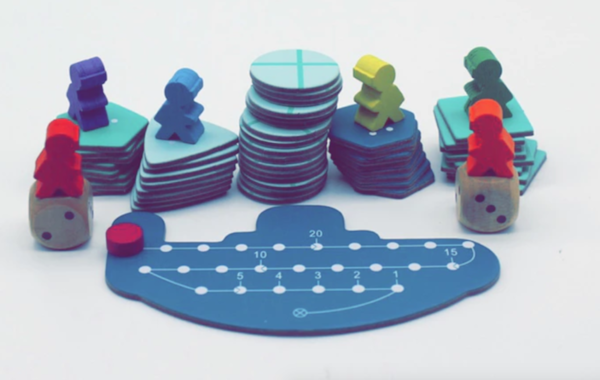 Campaign for 'Sea Board Game' even featured picture of original box

Crowdfunding has been a transformative force in the world of board games, but there continue to be examples of sobering warning stories for players looking to sink their money into the next big hit.

The latest concerns a game referred to only as ‘Sea Board Game’ and described as an “entertaining board game for sea lovers”.

As it turns out, the game probably is very entertaining – but that’s because it’s simply a clone of Japanese publisher Oink Games’ charming 2014 diving exploration title Deep Sea Adventure.

In Deep Sea Adventure, players roll dice to hunt for underwater treasure, carefully managing their limited air supply to gather as many ruins chips as possible over three rounds.

The Sea Board Game Kickstarter campaign went so far as to copy the official description text and gameplay summary for Deep Sea Adventure from its BoardGameGeek page.

If that wasn’t enough, the campaign even featured a picture of the back of the original game’s box – with a carefully positioned thumb hiding the Oink Games copyright information.

After spotting the campaign, Oink Games reported it to Kickstarter and issued a warning via its Twitter account, confirming: “We have nothing to do with this.”

“We have cancelled the project as initially we did have the permission for Oink Games to resell as per our customisation but now they have not agreed to go ahead,” the campaign’s organiser Mini Studio Games claimed in a blog post. “We apologise for the inconvenience.”

Earlier this year Oink Games accused US publisher Bezier Games of ‘copying’ its design for Werewords from Oink’s 2016 release Insider.

Designer Ted Alspach confirmed he had approach the studio to discuss licensing the design after noting the similarities with a game he had independently created, but dismissed the claim that the games were identical, listing multiple differences between the gameplay in each.

Oink remained steadfast in its belief that the game was copied, but acknowledged that – whatever the reality – rules for games cannot be copyrighted, unlike imagery and text. In the case of an out-and-out clone such as Sea Board Game, however, there appears to be little doubt.

We have nothing to do with this. https://t.co/xvgK8A7FMU Please do not back this project. We’ve reported the project to kickstarter.