Co-op gem Kitchen Rush cooks up a campaign, new art and modular board in revised edition 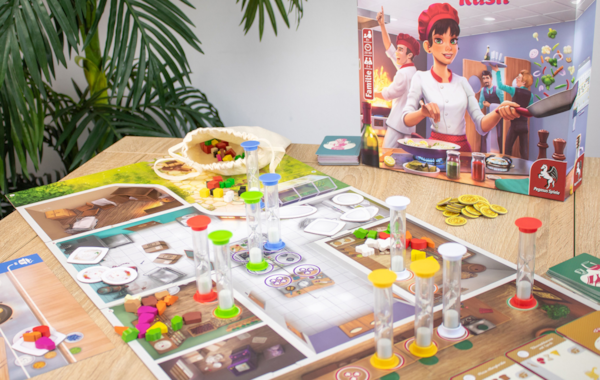 Chaotic real-time restaurant-management game Kitchen Rush is being given another generous serving in a tidied-up ‘revised edition’ of the co-op gem.

Released in 2017, Kitchen Rush was a hectic challenge of ordering ingredients, cooking meals and serving customers under the relentless pressure of ticking 30-second sand timers that were moved between stations around the top-down board.

We massively enjoyed our time with the fast-paced co-op gameplay in our review, but found ourselves disappointed by the game’s poor visuals and iffy production – which extended to the crucial sand timers.

Happily, it looks like Kitchen Rush’s few flaws might be scraped off its plate by an upcoming revised edition announced by German publisher Pegasus Spiele.

The game’s improvements go beyond the surface, too. The game’s rules have been revised to introduce some new mechanics, including the need to placate waiting customers by serving them free drinks. (Losing you money, in other words.) The penalty for failing to serve customers has also been adjusted, with demanding guests added an extra challenge and unsatisfied VIPs costing the kitchen additional reputation loss.

Meanwhile, the rules around storing ingredients – a key part of Kitchen Rush – have been made trickier, with pasta and bread no longer allowed to be kept with the other ingredients. It’s in part an effort to make the third storage room viable again, as the original game’s four-player limit meant that the third room was rarely used.

Both these new rules are said to be optional, with the original game’s rules able to be played in the revised edition.

A more significant addition is the revised edition’s campaign, which aims to introduce the game’s various rules and variants over the course of an eight-scenario tutorial.

Kitchen Rush expansion Piece of Cake previously added a way to play in a campaign, but the revised edition takes the idea one step further by making the main board modular. Players will add extra rooms and parts of the restaurant as they play, layering in the added complication of extra guest types, the separation of ingredients and other considerations as they progress through the story.

The downside of this is that the revised edition no longer supports a single-player mode, with the scenarios specifically designed for two to four people. Pegasus Spiele said that it had made an effort to make the game more accessible for families, but would explore the possibility of reintroducing a solo mode in the future.

Kitchen Rush: Revised Edition has been announced for release in German at this year’s Essen Spiel fair in October.

Responding to comments in a BoardGameGeek thread detailing the differences, Pegasus Spiele’s Sebastian Hein said that an English-language version was likely to enter production later this year for a future release.