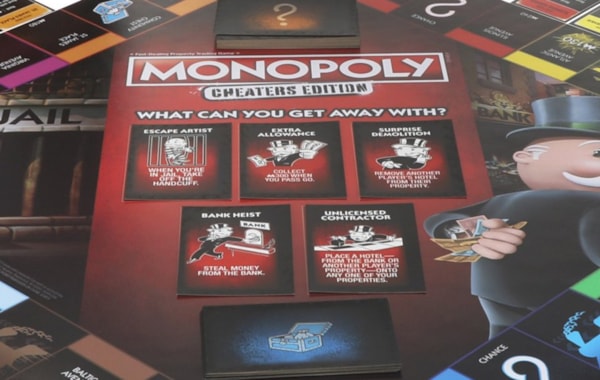 Other than not playing at all or introducing your own house rules, one of the most common ways to actually enjoy a game of Monopoly is to cheat.

Yes, it’s not the right thing to do, but we’ve all done it – sneaking an extra £100 from the bank, unmortgaging that property someone just landed on, only paying half your hotel maintenance bills. At some point, cheating at Monopoly became as iconic as the metal dog or passing ‘Go’ to collect £200. (Hasbro recently revealed its own statistics suggest half of players regularly cheat at the game.)

A new version of the property management classic due out this autumn will embrace its penchant for devious play in the form of the ‘Cheaters Edition’, Business Insider reports.

The board remains largely unchanged from the classic square of properties for sale, chance spaces and community chests, although a few spaces have been edited to make particular properties free for the first person to land on them. What will be completely new is a deck of 15 cheat cards.

Each game, five of the cards will be dealt into the middle of the board, allowing a variety of different classic tricks and cons to become part of the official rules. You might be able to steal money from the bank, place a hotel without paying for it, remove a hotel from another player’s property, move a different playing piece, jump spaces, collect rent for someone else’s space and more.

Nicking extra cash is even easier than before, as the edition has changed the need to have a diligent banker – for the first time in any version of Monopoly, the active player is the banker for their turn, presenting more chances to sneak an extra note or two.

If a player pulls off one of the swindles, they flip the card and take the reward – which tends to be exactly what it says. If they’re caught, however, they risk losing money, their piece being relocated around the board or even being sent to jail.

Being put in jail is even worse than usual, too, as the set comes with an actual handcuff that literally chains you to the board and must be worn until you are released (or pull off a daring escape – another possible cheat).

Although some players are likely to jump at the chance to cheat their way through another long game with their family, the Cheaters Edition won’t be for everyone. For rulebook sticklers, Hasbro has also put out the Monopoly CheatBot, an app that lets players rat out charlatans and issue punishments over Facebook Messenger.