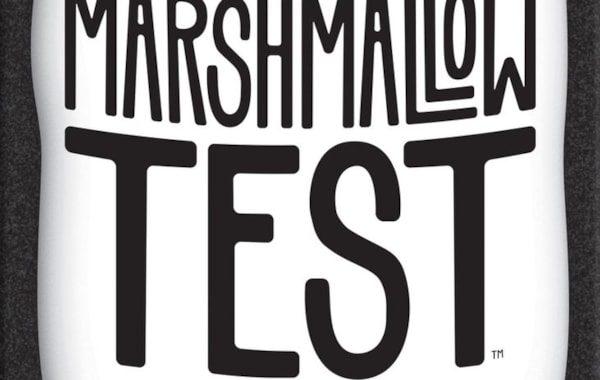 Can you find the sweet spot in Gamewright’s new games announcement?

The ever prolific Renier Knizia has a new game coming to us from Gamewright, Marshmallow Test.

Said to be a trick taking game where players play their cards out in matching, established colours, but only for so long. Players that wait too long to leave the game don’t get anything.

This is Knizia’s riff on the famous Stanford test (no, not that one, the nicer one involving sweets). The Stanford Marshmallow experiment is a study on delayed gratification. Initially carried out in 1972, the experiment offered a child a choice between one small immediate reward, or two small rewards if they waited a bit longer.

The result of the test was to, initially, show that those children who could deny themselves longer had better “life outcomes”. Of course, later repeats of the test with a wider demographic showed that economic background was a key factor, not willpower.

This is one of ten new games coming from Gameswright in 2020. The others are:

Dungeon Drop – a randomly spilled dungeon spells adventure. You collect items within certain dropped triangles in the dungeon to explore and gather more cards, loot, and take other actions. Sort of like doing 52-pick-up with Escape the Dark Castle.

Shifting Stones ­– tile shifting strategy with art by Kwanchai Moriya (Pret-a-Porter, The Game, In The Hal Of The Mountain King – the last here is reviewed in issue 40)

Hi-Lo Flip – a brightly coloured card flipping game with a chip-flip mechanism to reverse the turn order, and avoid disaster.

Dragonrealm – a follow-up to Dragonwood. We reviewed this in issue 37.

Marshmallow Test – can you delay your gratification? (We hope so as it’s not going to be out for a little while!)

Splurt! – tiny box, big party fun with a tasty 2-99 player limit. Think of a word that matches the flipped card fastest and get the card. The most cards wins, naturally.

Hit List – a shout-the-answers-against-the-time game. They have to match what’s on the card to count for points