Boss Monster 3 is coming next year, with a kids’ version also in the works 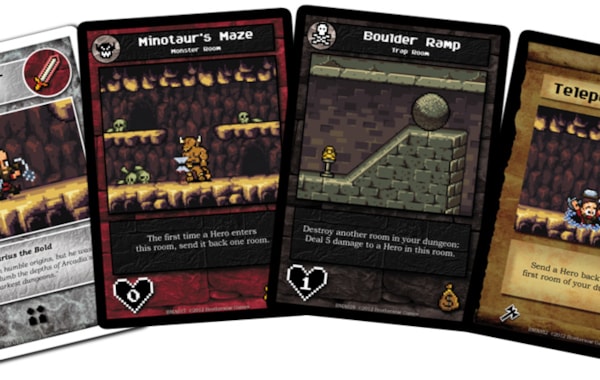 Retro video game-inspired card game Boss Monster is getting a second sequel in 2018, its co-designer has revealed.

Chris O’Neal told Tabletop Gaming that Boss Monster 3 – the follow-up to the 2013 original and its 2015 sequel Boss Monster 2: The Next Level, plus various smaller expansions – is due for release next year, following Brotherwise Games’ launch of Unearth, the publisher’s first non-Boss Monster game, at Gen Con this August.

Unearth is Brotherwise’s first game not designed by the O’Neals, with Jason Harner and Matthew Ransom helming the isometric dice-roller.

O’Neal, who co-created Boss Monster with his brother and fellow Brotherwise co-founder Johnny, added that the team is also working on a potential version of their flagship game aimed at younger players.

“Brotherwise is definitely moving on to more titles and a bigger vision of our company, but that doesn't mean we're leaving Boss Monster behind,” Chris confirmed.

In the meantime, the O’Neal brothers have plans to launch a Kickstarter campaign this autumn for a currently untitled new game – although Chris was reticent to reveal any more information about the secretive project.

“During some time between Johnny's toy industry jobs, he and I designed some new games with a lot of potential,” he explained. “One of those games is now in final playtesting and moving on to graphic design.

“We'll be announcing it with a Kickstarter this fall, and we think it's destined for success… but we're not quite ready to drop any other hints about it.”