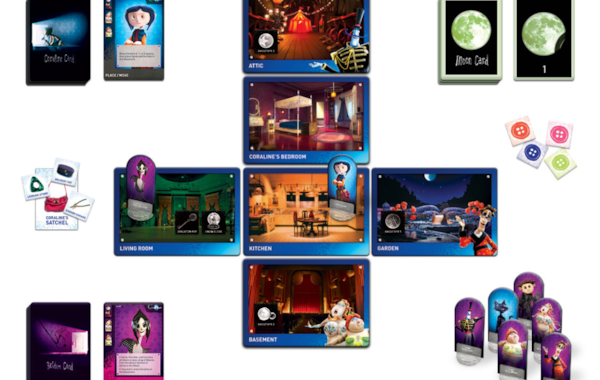 Real talk: Coraline is one of the best animated films of the 21st century, a delightfully dark adaptation of Neil Gaiman’s spellbinding book about a young girl who visits an alternative world where her parents have buttons for eyes.

Now, on the 10th anniversary of director Henry ‘Nightmare before Christmas’ Selick’s stop-motion take on Gaiman’s story, Coraline is being adapted once again, this time into a co-operative board game. [Spoilers for Coraline follow but, honestly, if you haven’t seen it, go and watch it!]

Coraline: Beware the Other Mother pits up to four players against the Other Mother, Coraline’s doppelgänger parent who tries to convince the precocious adventurer to stay in the Other World – at the cost of her eyes.

The players control the ghost children previously imprisoned by the Other Mother, who must help Coraline to defeat the Other Mother’s true form – the Beldam – before she’s stuck in the Other World for good.

The game echoes the finale of the book and film, as the players hunt down the objects needed to free Coraline and her true parents. The game board is made up of different locations in the Other World that the characters can move between, with decks of cards for Coraline and the Other Mother driving the action.

Along the way, they’ll have to deal with the mouse circus of Mr. Bobinsky, acquire the pearl ring from dog-loving former actresses Miss Spink and Miss Forcible, avoid the Other Father on his praying mantis mount, and finally steal the skeleton key needed to flee back into the real world, as well as the snow globe with Coraline’s parents trapped inside.

The game plays out in around half an hour and, like many co-ops, will see the players win or lose together depending on whether they gather all the objects in time before the shadow of a button eclipses the moon.

Coraline: Beware the Other Mother will be released by publisher WizKids this December. It’ll cost $20 (£16) in the US.