Become DC super-villains and try to bring down the Dark Knight in Talisman: Batman 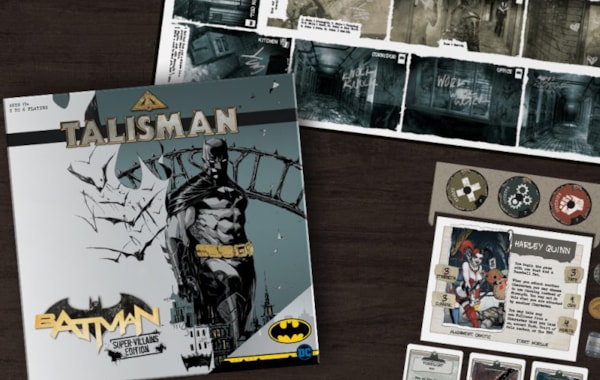 After chucking a Kingdom Hearts crossover and a new edition of Warhammer 40,000: Relic on its fire, the Talisman train keeps on running – and its next stop will be Batman’s home of Gotham City.

Talisman: Batman – Super-Villains Edition is an upcoming version of Games Workshop’s much-loved magical quest game based on the legendary DC comic-book character and his adversaries such as the Joker, Two-Face and Harley Quinn.

It’s the second major Talisman spin-off due out in 2019 after the tie-in with Disney-Final Fantasy video game Kingdom Hearts, and is similarly coming out of new Talisman publisher The OP.

In a reversal of the typical Batman setup, the players control the Dark Knight’s enemies as they escape from Arkham Asylum. Gotham City’s notorious prison provides the backdrop for Talisman’s dice-driven gameplay, as the baddies make their way through its two floors and tower to release their fellow inmates and ultimately bring down the Bat.

The game can be played competitively or in co-op, as players’ arch-villains build up their strength, health and cunning stats as they progress around the board and resolve various encounters and events, in keeping with Talisman’s classic adventuring.

The game’s visuals take cues from the New 52 era of DC’s comics, with 13 character figures based on the Batman baddies coming in the box.

Talisman: Batman – Super-Villains Edition will be released this June.