Azul: Summer Pavilion is the third game in the hit tiling series, out next month 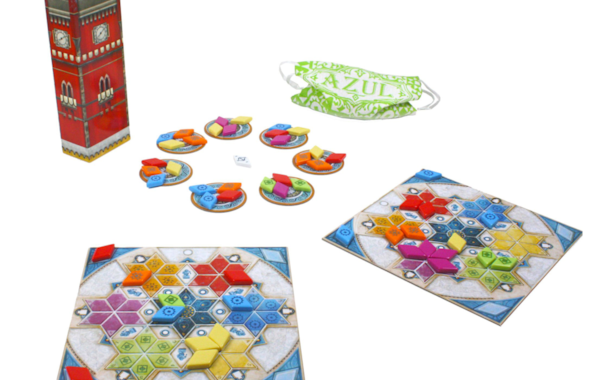 Azul is getting a second sequel that puts another fresh twist on Michael Kiesling’s smash-hit tile-drafting and placement game.

Azul: Summer Pavilion follows the 2017 Spiel des Jahres winner – which publisher Next Move says has now sold over one million copies – and last year’s follow-up Stained Glass of Sintra, which swapped the Starburst-like wall tiles for ‘glass’ mosaic windows and introduced slightly more complex rules on how to place and score your pieces.

Like Sintra, Summer Pavilion is a standalone game that borrows the core drafting gameplay of Azul, where players collect tiles of a particular colour from one of several ‘factory’ boards, but leads it in a brand new direction.

Key to Summer Pavilion’s distinctive take on the formula is the introduction of a new ‘wild’ colour each round. As before, players can collect all the tiles of one colour (except the wild) from one of the factories, but can also take a wild-colour tile if there’s one on that board. As in Azul and Sintra, the unclaimed tiles go to the centre of the table, where players can pick at the collected leftovers.

The tiles are then arranged on each player’s individual board. Replacing the square wall of Azul and column windows of Sintra are star arrangements, filled by the new diamond-shaped tiles. Each star is made up of six spaces, each costing a number of matching-colour pieces to fill from one to six, with wilds counting as any colour. There is one star in each of the six tile colours, plus a seventh central star made up of one tile in each colour. (The reverse of the player boards lets players shoot for several multi-coloured or single-colour stars as they see fit.)

Points are scored for placing tiles next to other tiles, while surrounding the icons on the board – pillars, statues and windows – grants the ability to draw extra tiles. Although, unlike Azul and Sintra, there’s no immediate punishment for drawing from the middle set of tiles or collecting too many tiles, players can only keep up to four unused tiles for the next round – everything over that takes away from their score. At the end of the game, extra points are gained for completing stars and covering sets of numbers on all of the stars.

Once again, Summer Pavilion’s theme is inspired by the real-life Portuguese ruler King Manuel I, who commissioned artists to build a summer pavilion – the king ultimately died before the pavilion began construction. Azul and Sintra artist Chris Quilliams returns to imagine what the unfinished floors of the grand building might have looked like.

Summer Pavilion’s play time hews closely to that of Azul and Sintra, coming in at around half an hour to 45 minutes with two to four players.

The game will be released at the Essen Spiel game fair in Germany at the end of October, with a release in shops said to follow “shortly after”.