We talk to the creator of one of the most anticipated games of 2020, the solo space invaders meets independence day homage: Under Falling Skies

Tomáš Uhlíř, a former architect turned game designer is the creator of Under Falling Skies, a solo game in the spirit of space invaders. Its beginnings weren’t from a youth spent hunched over an arcade machine however, but a competition held on the BoardGameGeek forums.

“I am not sure what I love more, if it’s playing games or designing them,” says Uhlíř “Under Falling Skies originated as a very minimalist solo game designed for a 2019 9-card Game Design Contest run on BGG. Later on, after being picked up by Czech Games Edition, we decided to expand it into a much bigger game.”

In nine cards Uhlíř was able to bring the feeling of space invaders to the tabletop.

“Many players describe the game as a mix of Space Invaders, Independence Day and X-COM, and that’s about right,” says Uhlíř, smiling. Calling the game an analogue Space Invaders is a bit unfair, there’s more to it than a direct translation of slowly descending aliens and a few pixels shooting lasers. There are underground bases for a start. Players play as humanity standing against alien invasion – trying to survive and maybe even defeat their aggressors. The underground bases which house the trembling masses of humanity are your engine for this struggle. 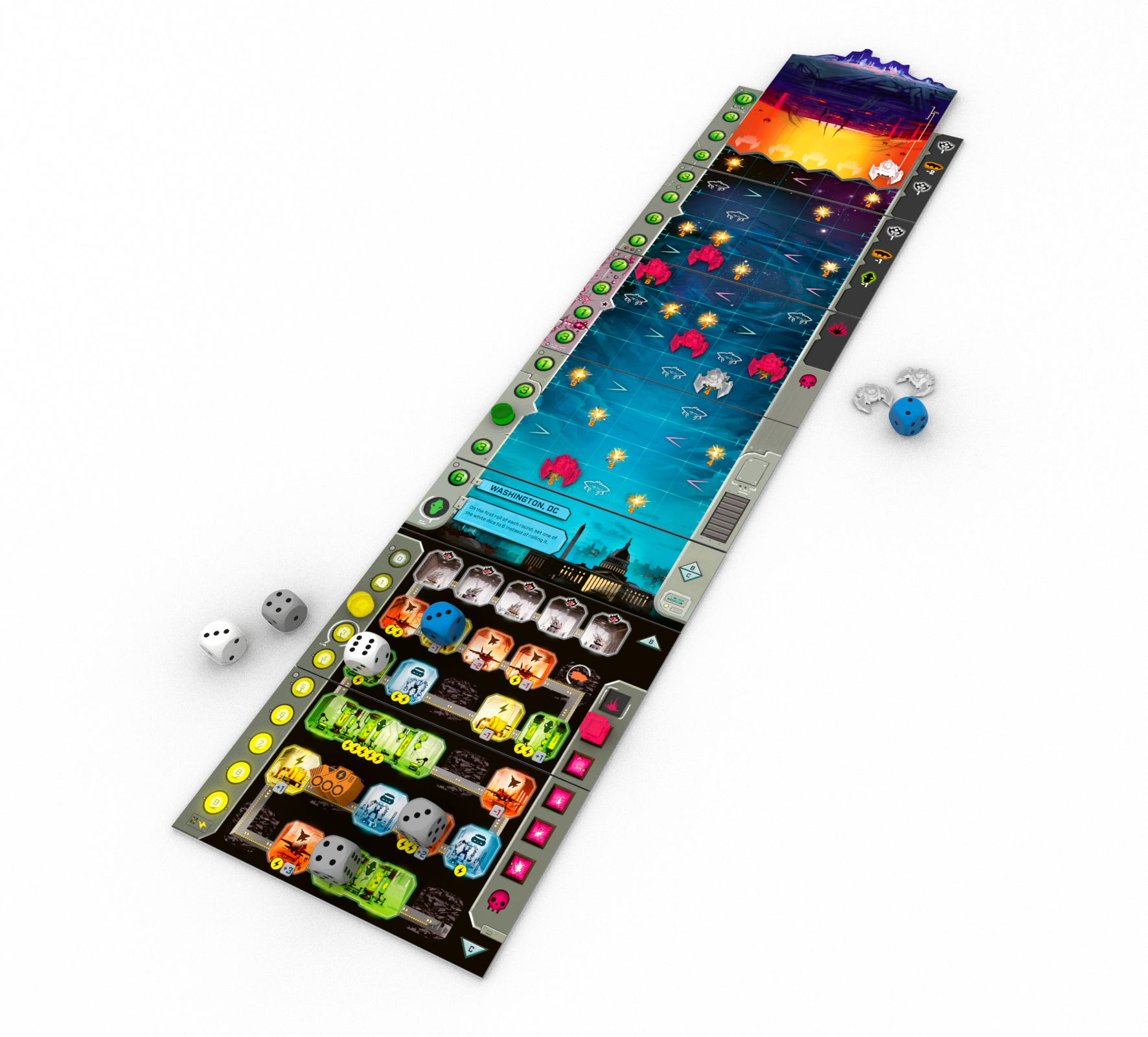 THEY CAME FROM ABOVE

“It’s basically a dice placement game,” says Uhlíř, “but in Under Falling Skies, each dice you place comes with many consequences. Each dice can activate a room in your base, but it also moves enemy ships, depending on where you place it.”

This is the central tussle at the heart of Under Falling Skies – your progress is their progress. How much are you willing to put yourself at risk for the advantage you’ll gain?

“High numbers grant stronger effects, but make the ships descend faster. You can place only one dice in each column, so you are limiting yourself with every dice you place,” expands Uhlíř, “however, it’s not only about the dice value and its position, the timing is equally important. You have three grey and two white dice and every time you place one of the whites, you must reroll all the dice you haven’t placed yet.”

This makes for temptation for players – you have the perfect answer in your current dice pool, but because it’s white you’ll have to randomise everything else you’ve planned to do after taking the shot. What is the real cost if you can’t do your third or fourth preferred action?

“While you juggle your dice rolls, you use them to produce energy for your rooms, shoot down enemy ships, work on the research, build robots that can help you in your effort, and to expand your base to widen your options and to get to better rooms,” says Uhlíř, “it all results in a very absorbing and intricate dynamic puzzle.”

The puzzle plays out on an unusual, skinny board. Above is the sky and the city you’re hoping to defend – whereas the underground base extends beneath.

“The alien mothership at the top slowly descends towards the city and it spawns loads of smaller ships on its way,” says Uhlíř. “One interesting thing about the game is that everything in it is double sided, including the seven cardboard tiles forming the board. Each of the tiles can be flipped to the other side and this mechanic not only gives you a ton of variability, but it is also used to raise the difficulty, because the reverse side of each sky tile is more challenging.”

Development of the game took a different route to many. Rather than a prototype internally worked over – the competition win pushed it out into the limelight. You can of course download the original print and play right now, but much has changed for its newest incarnation.

“With the nine card version, my goal was to use simple rules and pack as much depth as I could into the limited components,” says Uhlíř “with the boxed product, I decided to keep the compact ruleset, while bringing in much more variability and introducing a fully replayable campaign.”

“We came up with a very interesting way to introduce new content. As you progress through the campaign, the cardboard is laid in the box in layers, divided into four chapters by comics sheets. Each comic, on one side, describes how the story advances, while the other side explains new mechanics. It not only helps to teach you the game, as you go, but you can always look forward to what hides in the next chapter.”

All of this is supported by the always powerful artwork of Kwanchai Moriya, “I am really glad that we could have him on the project. I can’t imagine what must be in his head, when he is able to come up with those amazing compositions and colours.”

The art direction is bold, using the atmospheric glow seen in much of Moriya’s game artwork, this sense of eternal sunset or sunrise that leaks through the artwork of the game is something of a function of the time difference in the pair’s communication.

“We had to deal with the nine hour time difference, so most of the communication took place either late evening our time or late night his time, meaning one of us was already quite tired,” laughs Uhlíř, “I remember when he said something like, ‘this project wins the “Most Gameplay Jammed into a Tiny Space” award from me’.”

“The most tricky part was probably the underground base design. If you look really closely, you will see that each room is shown in perspective, meaning that you can see a big part of the floor in the bottom rooms and more of the ceiling in the topmost rooms. Because each tile has a different room layout, he couldn’t make just simple icons and copy them around, each must base tile was illustrated separately.”

ALONE AGAINST THE UNIVERSE

It might be old hat to bring it up now, but this is a solo game, which still feels like a brave choice. Not so, according to Uhlíř, “I believe that it has never been a better time to come up with a solo game. Not only because of the current world situation, but the ranks of solo gamers are growing very rapidly and they are very active in their communities and forums, turning the solo experience into something more social.”

“The market is already aware of this trend, more and more games come out with some kind of automa or a solo mode,” he continues, “however, there are still very few dedicated one-player games, designed as a solo experience from the beginning. And I believe, that’s something that players will appreciate.”

As with any solo game, there’s a certain attention to detail that is required. Many games with a higher base player count can rely on the fuzzy intuition between people – if you’re playing it wrong and still having fun, then it’s a success. In solo games we have to rely on the rulebook and the intuitiveness of the board and game flow. Uhlíř took great pains to make this possible.

“When playing alone, there is no one there to point out possible errors you could have made. So, everything needs to be even more intuitive. Simple rules, as in our case, are a big advantage. We paid great attention to the user interface and the way everything is presented. All the feedback from the game’s print and play predecessor was really handy to have,” explains Uhlíř.

“I love the challenge and the flow-state experience that the games can provide, and that’s something you can experience even when playing solo.”

Under Falling Skies joins the ranks of ‘triple-A’ solo games, like the classic Friday from Friedemann Friese (Powergrid), or the upcoming Veilwraith from Tristan Hall (Gloom of Kilforth). It’s not the first of its kind then, but it seems to be the cresting wave of a modern trend. Treating the solo mode of a game with as much thought and focus as the multiplayer version is at least going to be the new normal.

With Under Falling Skies hitting shelves soon, there’s only one question left to ask: Independence Day, or Arrival?

“I am a big fan of Independence Day for its 90s feel, maybe that’s why I decided to go with this setting for Under Falling Skies in the end.”