Ten of the Best: Miniature games If plastic people and deep tactical gameplay is to your tastes, there’s a glut of miniatures games to gorge yourself on. Whether you’re after fast-paced sports action, brutal combat simulations or a new universe to explore, are just starting out or already a seasoned fan, our selection should have something for you.

Plus, don't miss our new video on this very topic! With inspiration from this list, adding in a few updates, we've a ten of the best Miniature games video for your enjoyment. Join Charlie as we check out some of the best, but be sure to let us know what games should make our next list!

A spiritual successor to the brutal American football matches of Blood Bowl, Guild Ball is a distinctly British take on the fantasy sports genre. Two opponents each control a team of six players competing in a football (that’s proper football) match, with the game’s fluid momentum system building up the action as players pass the ball around before unleashing special plays, such as taking a shot on goal. The guilds that make up each side are twisted versions of traditional vocations – butchers, brewers, engineers and fishermen, to name a few – who put a unique spin on the typical fantasy factions, with distinct play styles and characters. Backed up by slick gameplay driven by d6 rolls and a highly active community, there’s no shortage of ways to learn the ropes quickly and get involved. 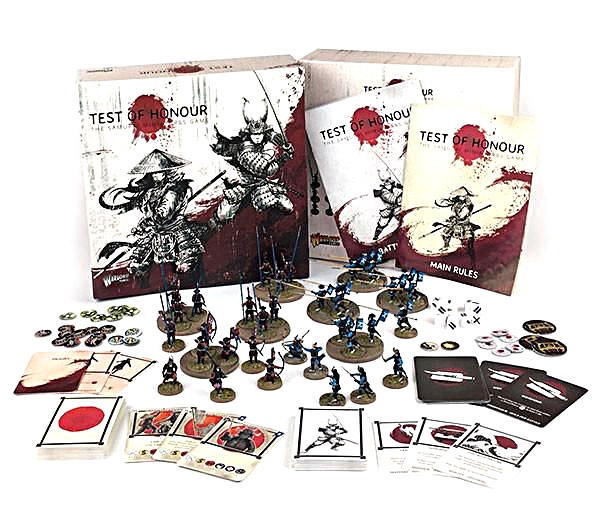 A swift and brutal samurai skirmish game, Test of Honour uses only a few handfuls of models – a hero, their companions and some soldiers – to recreate fierce battles between rival clans. The core box includes a series of six scenarios that can be played as a connected campaign, with warriors gaining skills or even choosing to take a more dishonourable route to claim victory over their foes. Each scenario has a different objective, from defeating all of the rival warriors to defending an outpost or offering protection to a spy, giving the narrative thrust of the game even more impact. Matches can play out in as little as half an hour and are dictated by drawing tokens from a bag, making the action unpredictable and tense.

Buy your copy of Test of Honour here.

One of the most promising heirs to the throne of Warhammer 40,000, Infinity is a quick-playing sci-fi combat game partially inspired by the future tech and style of Japanese manga. Set almost two centuries from now, Infinity centres around squads of human and alien soldiers conducting combat missions. The feeling of controlling a squad is heightened with the ‘automatic reaction order’ system, which lets players take actions with their figures to respond to their opponent’s moves – such as firing off shots at units moving from behind cover. The fast-moving, smooth feel means that matches feel cinematic and play out quickly. The immersive universe has since been expanded with spin-off sports board game Aristeia! and a roleplaying game that delves into the wider lore of the galaxy.

Buy your copy of Infinity here 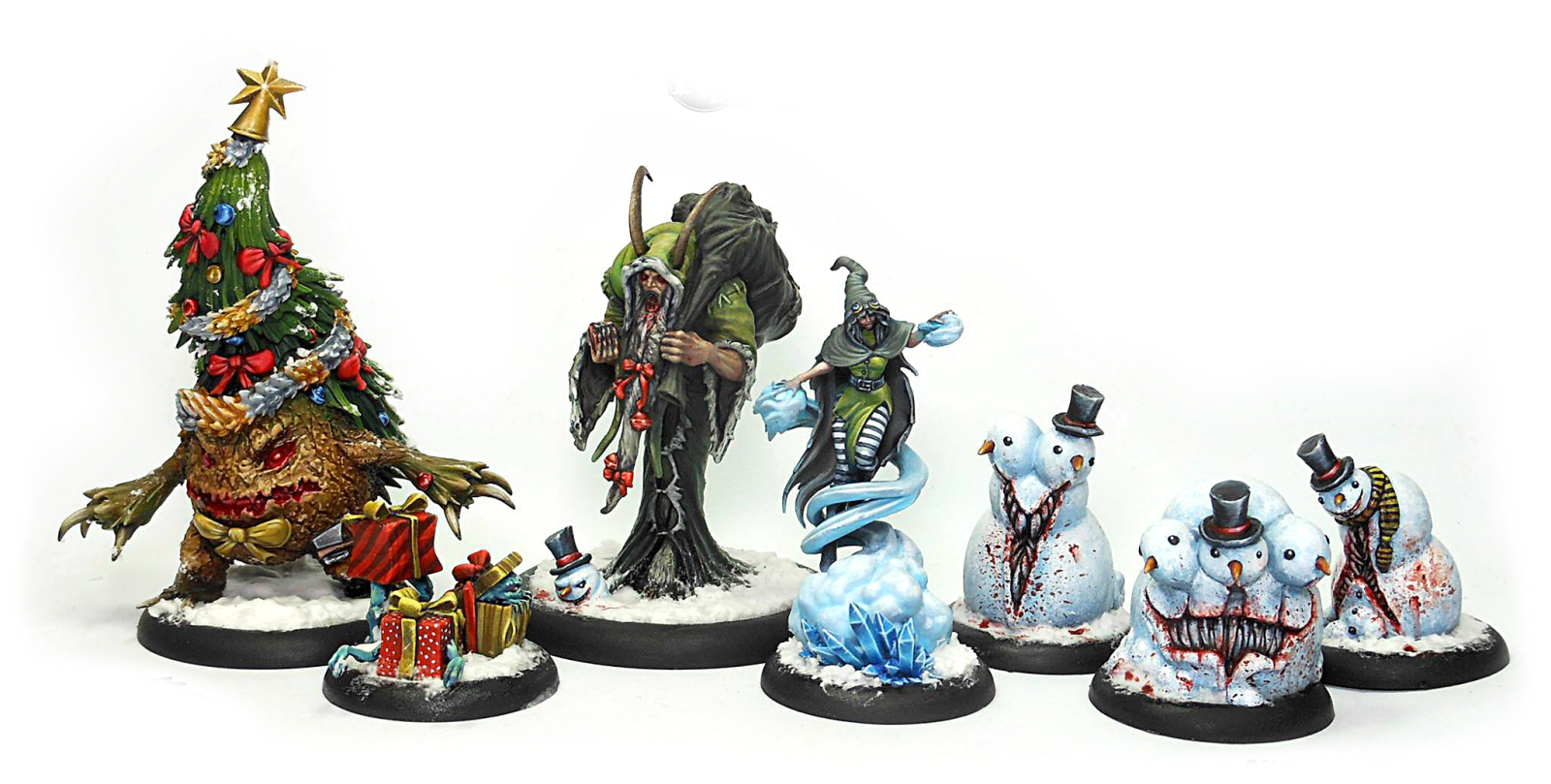 Malifaux has one of the most distinct visual styles in our list, with a horror-steampunk vibe infused with elements of the Wild West and Victorian gothic. Crews of between seven and ten models, led by a single master supported by their minions, battle for control of precious soulstones. Every figure has an individual power and, instead of dice, decks of fate cards decide the outcome of attacks, spells and more. Players can manipulate these decks by cheating fate to gain an advantage, leading to a dynamic, atmospheric fight.

For fans of: The weird, Tim Burton, dice haters

Buy one of the Malifaux core sets here 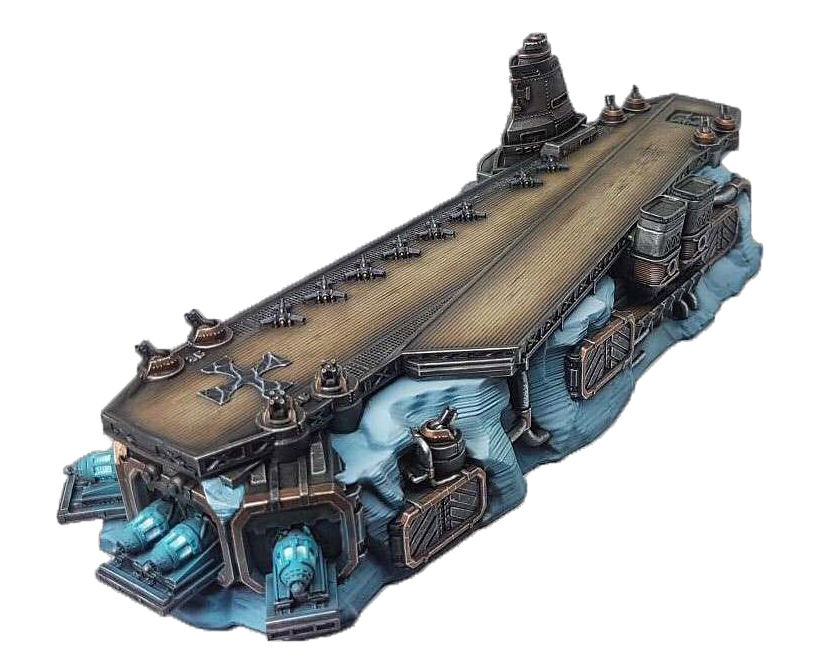 Bringing its steampunk world of the 1870s to life with some fantastic models, Dystopian Wars is a warfare game unlike any other and a delightfully original entry in the crowded genre. The rules – based on the d6-powered gameplay of Firestorm Armada and Uncharted Seas – are designed to allow huge squadrons of planes, land ships, boats, balloons to battle across land, sea and air in a reasonable amount of time, and also support the use of a deck of 52 cards for added unpredictability and tension. You can choose to fight in a single environment, or combine all three for an epic conflict, customising your fleet to ensure victory. 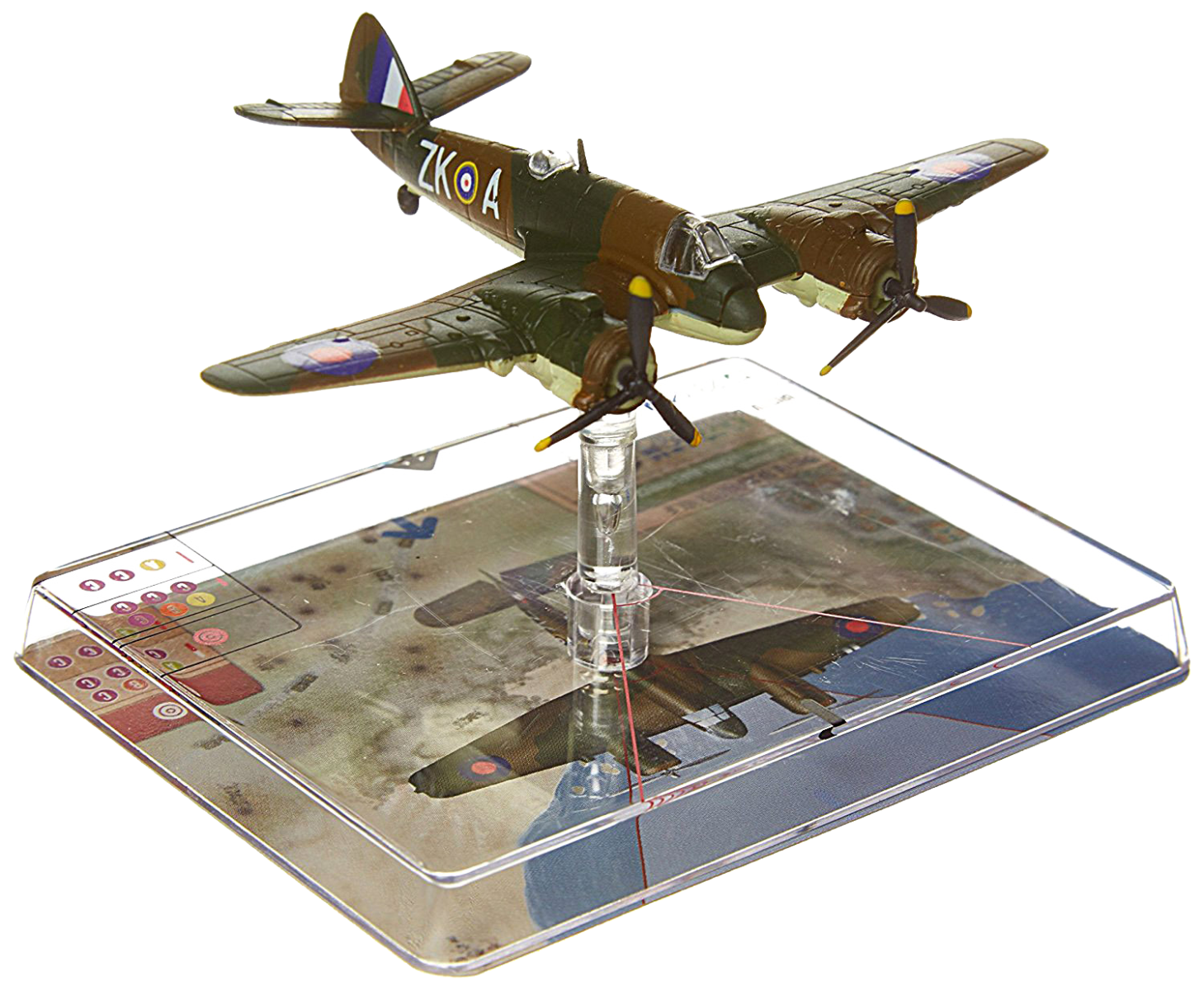 Taking to the skies of World War I and II, Wings of Glory is a fast and thrilling aerial miniatures game that recreates the twists, turns and inevitable crashes of historical dogfighting. Plane cards and a deck of manoeuvre cards give each aircraft a unique style of flying, while a shared damage deck for each type of plane makes exchanging fire quick and dramatic. Players plan their plane’s move with a series of cards, combining moves to pull off dramatic stunts and outmanoeuvring their opponents. As well as simple dogfights, the game includes the chance to take on a variety of scenarios and objectives, from strafing runs to bombing runs. A spin-off mashup with sci-fi classic The War of the Worlds is due out this summer that will be fully compatible with the World War I planes, and also introduces Martian tripods.

Buy your copy of WIngs of Glory here 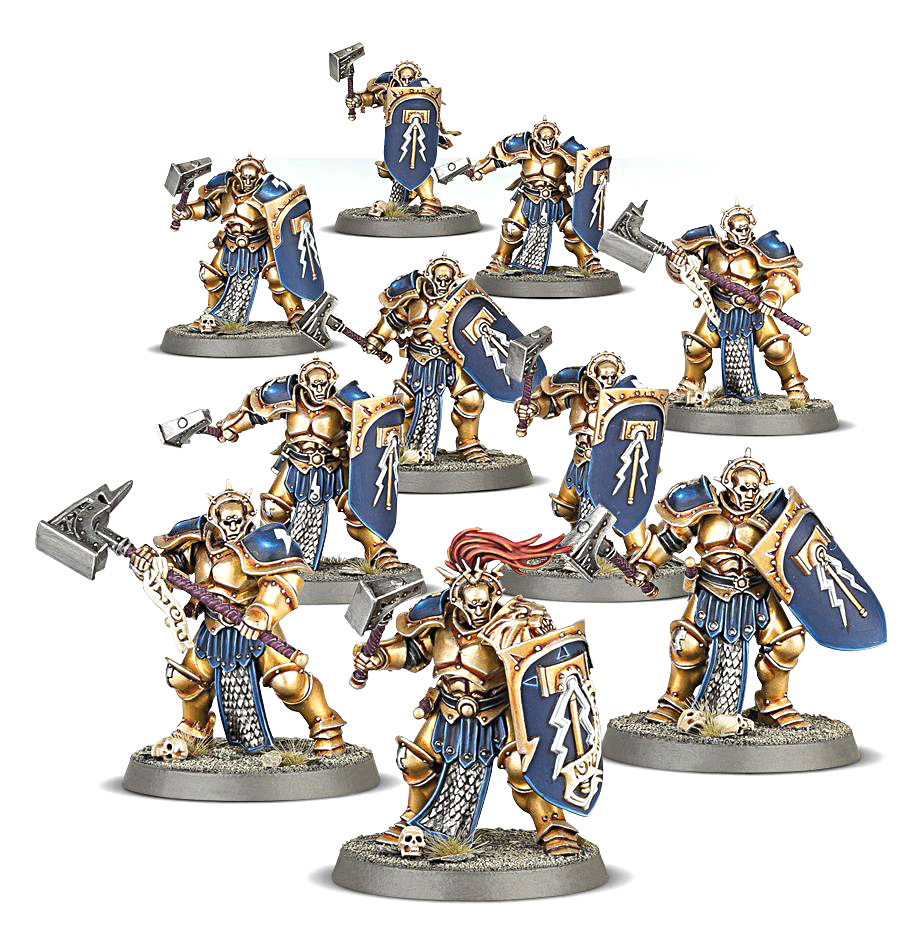 The Dungeons & Dragons of the miniatures world, Warhammer and Warhammer 40,000 continue to sit in the top echelons of miniatures thanks to their outstanding models, deep lore and gameplay that’s been refined – and completely revised at points – over decades. Both Age of Sigmar (which replaced classic Warhammer Fantasy Battle) and the new eighth edition of Warhammer 40,000 are fantastic games, and the newly streamlined rules mean that it’s never been easier to start collecting and playing. The Warhammer 40,000 universe is especially rich with plenty of detailed characters, factions and stories to uncover – not to mention the awesome and enormous vehicles that stomp and blast their way through the grimdark landscape. As easily the biggest miniatures games around, there’s no shortage of help for beginners and a huge community that runs some of the most impressive tournaments in the hobby.

For fans of: Space Marines, the populist choice, the Emperor 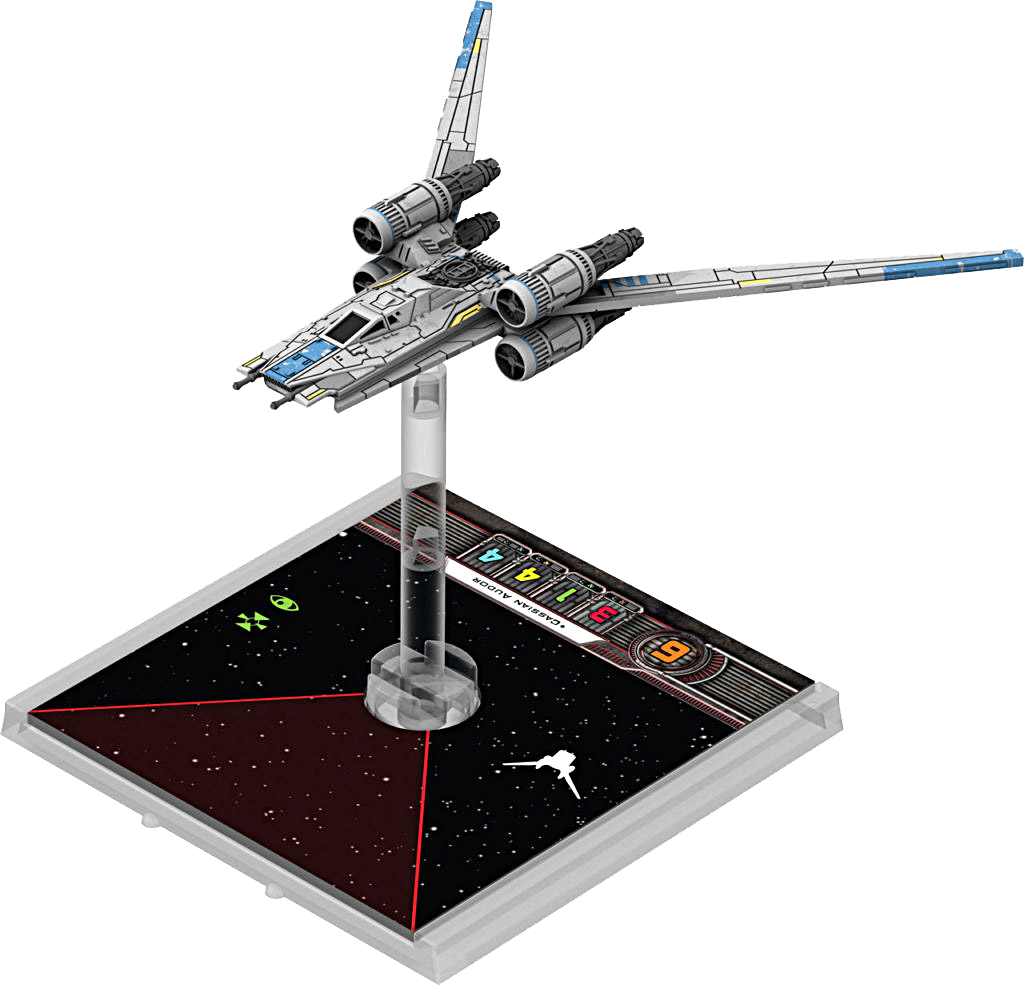 One of the most accessible minis titles on this list, X-Wing does away with the pressure of gluing together models and painting them with gorgeous figures of the most famous spaceships in history. The gameplay, too, is very easy to pick up, consisting of a straightforward dial system that lets the various Star Wars pilots zoom around space, barrel-roll, open fire and stay on target. In the years since it debuted, the series has put out a huge variety of ships from the Star Wars movies and their various spin-offs, meaning there are plenty of customisation options as you build up your fleet. A number of small and major tournaments are held every year and often dictate which ships are the ones to be using, but you can have just as much fun using a handful of ships on your dining room table.

For fans of: Characters you already know the names of; fast-paced, easy-to-learn gameplay; not having to paint or glue anything 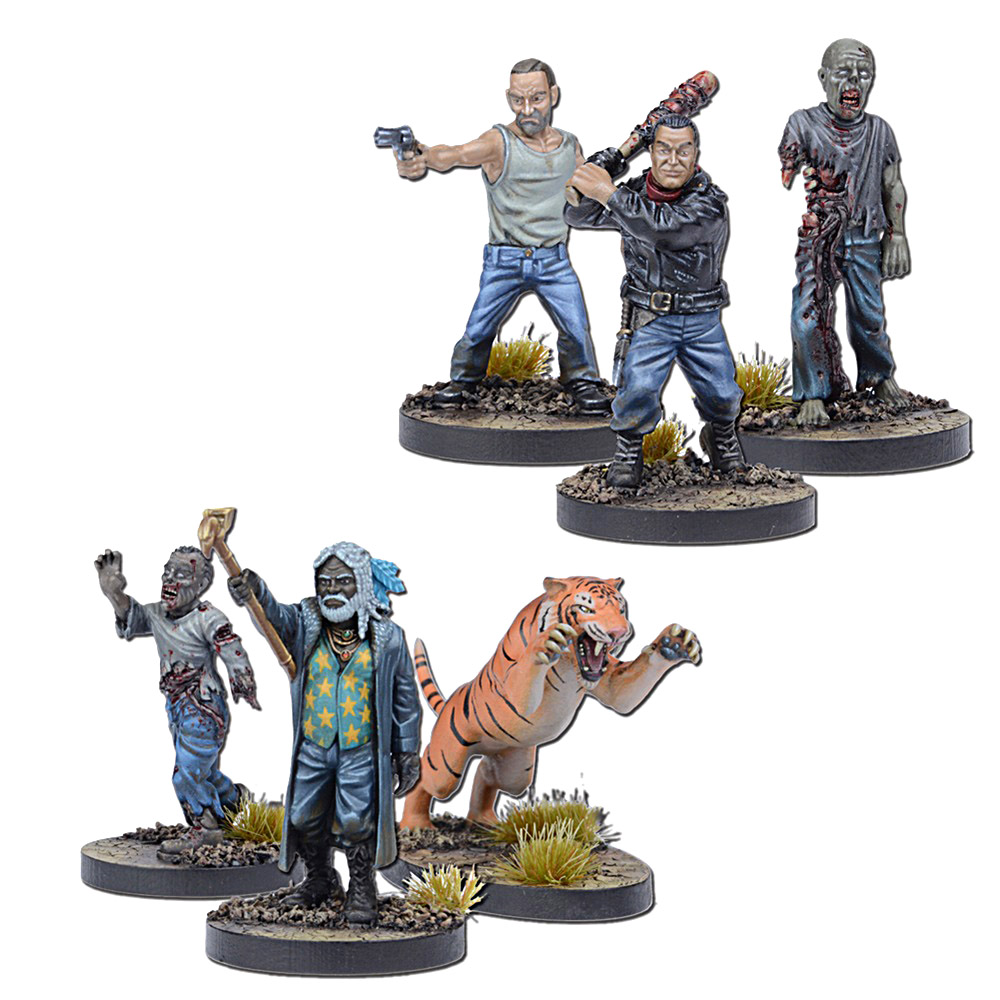 Based on the original comic book series rather than the hugely popular TV show that followed, All Out War pits two factions of humans against each other with the brain-hungry zombies of the title serving as a danger to both groups. (There’s also the option to play solo or in co-op.) The gameplay is a streamlined version of traditional wargaming tropes, combine with elements such as an events deck that can raise the overall threat level and bring more walkers shambling into the battlefield. Certain actions generate noise and attract the attention of the undead, which often occurs as the competing groups race to collect the most supplies or dispatch their opponents first to claim victory. The cast of characters from the books are all present and correct, and can work together in a variety of fun and interesting ways, with the core box serving as a very accessible jumping on point for fans who might not have played a minis game before. It’s dead good.

Buy your copy of The Walking Dead: All Out War here. 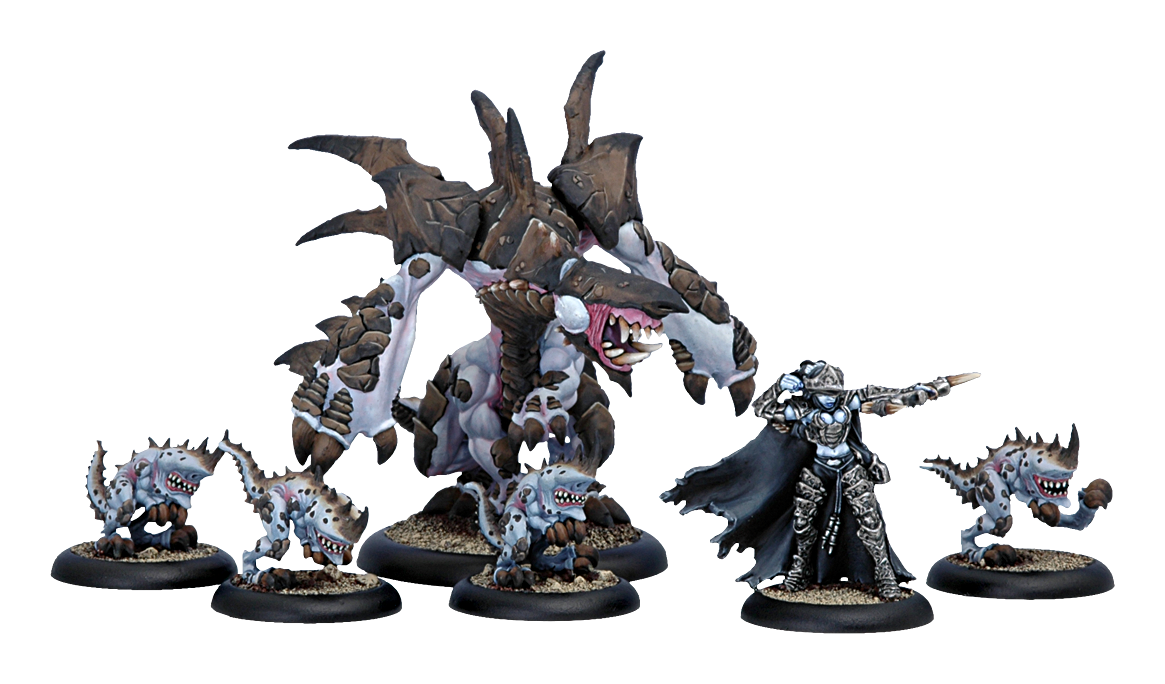 Two different games, but fully compatible with each other, Warmachine and Hordes are miniatures games for those uninterested in playing it safe. The games’ dice-based combat rewards aggressive play, with Warmachine’s focus and Hordes’ fury systems allowing units to boost their attacks and fire off spells – but unrestrained fury risks Hordes’ Warbeasts entering a frenzy and potentially turning on their allies, making managing your points key to wiping out the enemy. The fantasy-meets-steampunk setting of the Iron Kingdoms (based on an RPG of the same name) provides plenty of unique models and varying factions to explore, from the civilised regions where Warmachine takes place to the brutal landscape of Hordes. With troops inspired by classic fantasy as well as powerful metal machines, the world is one of the most distinctive on the tabletop.

For fans of: Pent-up rage, head-on action, metal and magic

Buy your copy of Warmachine Hordes Company of Iron here.