Ten of the Best: Dexterity games Show your skills, in our top 10 dexterity games

Flick, flip and throw your way through our picks of the active games that’ll have you out of your seat. Let’s get physical! 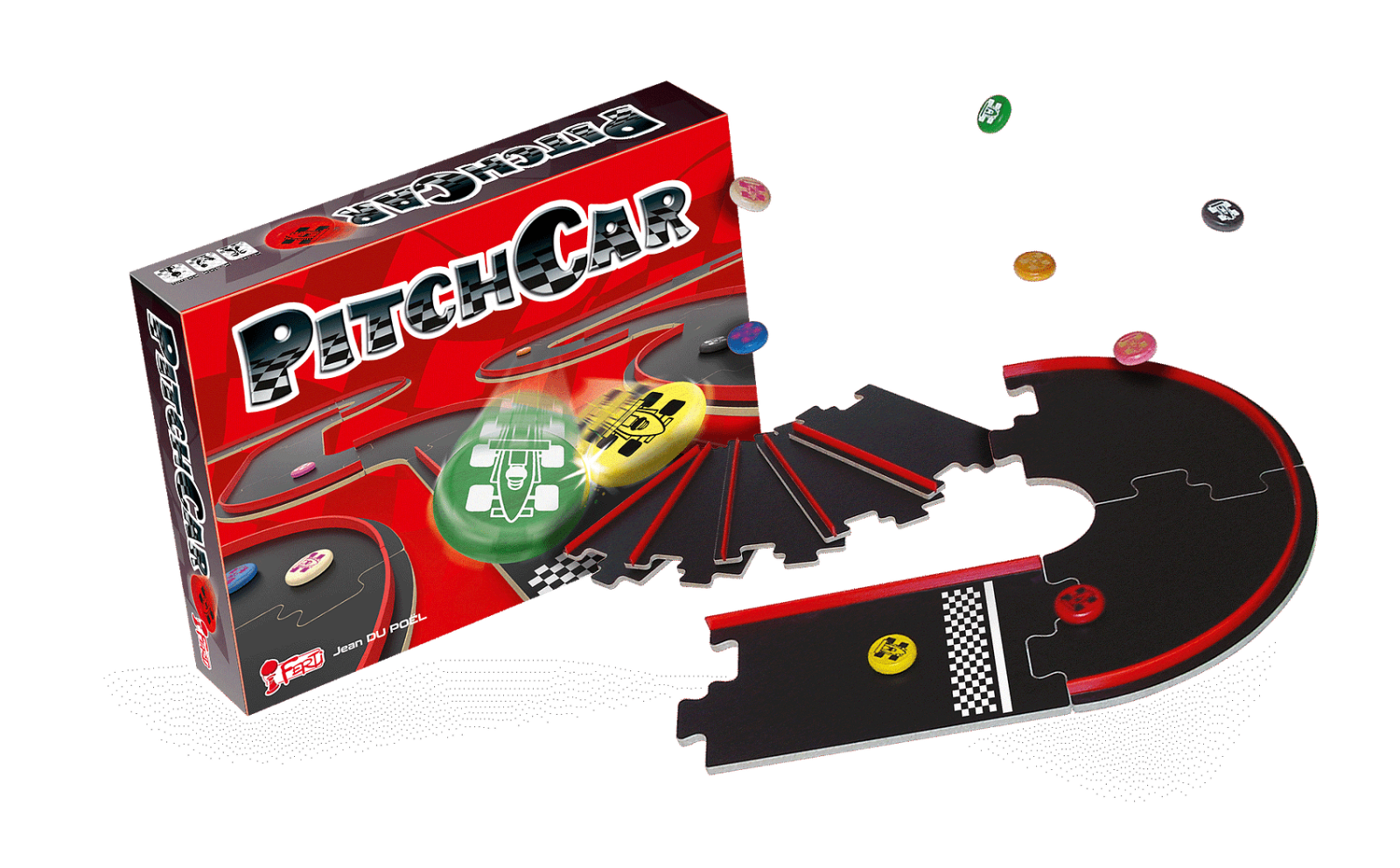 Summed up as a power cut-friendly Scalextric where the power lies – literally – in your finger, PitchCar’s appeal is simple: flick cars around a track and race to be the first to cross the finish line. The cars in this case are circular wooden discs, but the real joy of PitchCar lies in its customisable tracks, which can be pieced together in simple circuits or impressively elaborate constructions to add jumps, corners and more to the challenge. Barriers can bounce skidding discs back onto the racing line, but there’s still the risk of flying off unprotected corners or overturning – resetting your car and potentially giving your opponents the chance to overtake. As fun as it is straightforward, PitchCar has remained right at the front of the pack since it first revved up excitement more than 20 years ago for a good reason.

Buy your copy of PitchCar here. 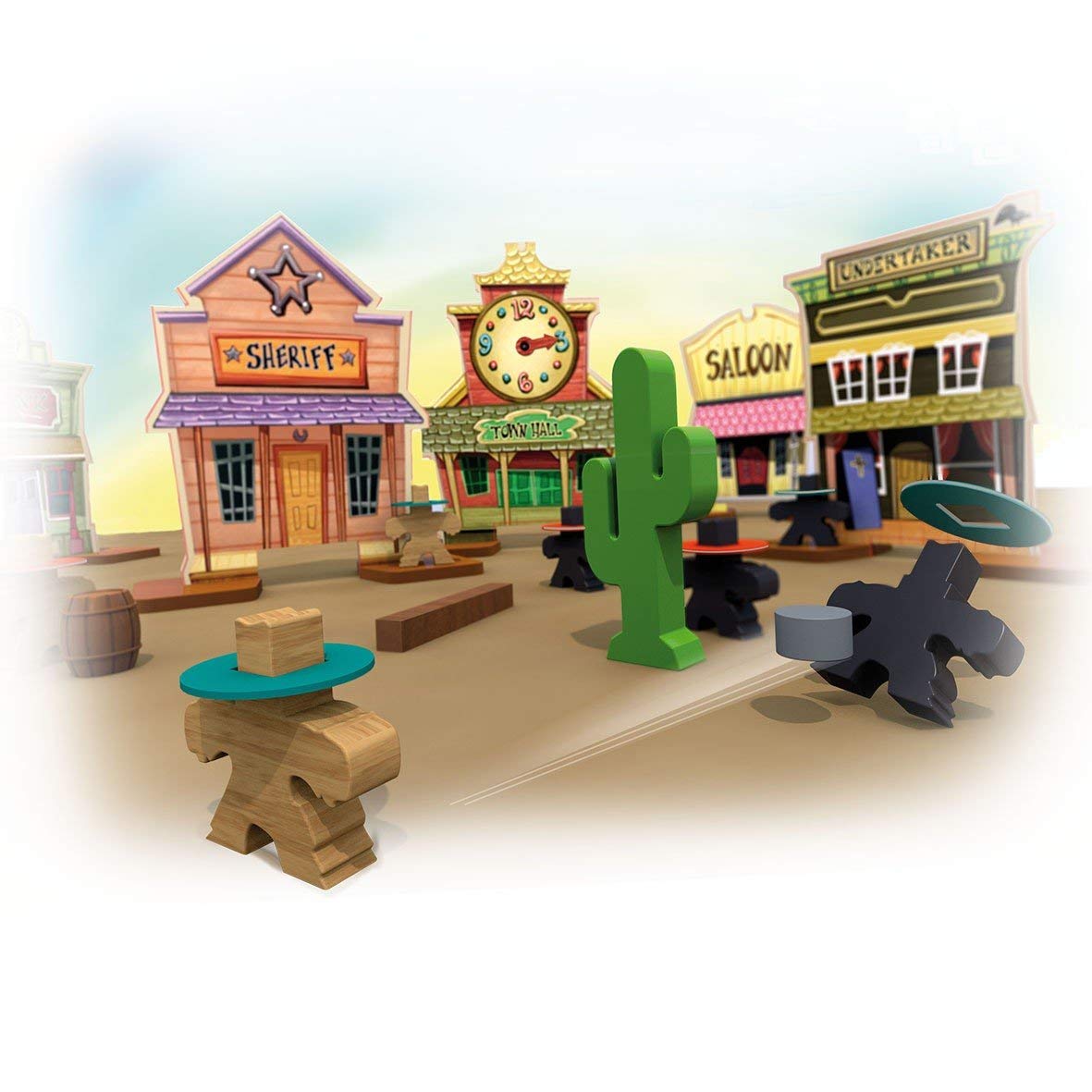 Forget needing A Fistful of Dollars – all you need here is one steady finger. This rootin’, tootin’, disc-shootin’ duel is a gunslinging showdown between outlaws and lawmakers in a town straight out of the Wild West. 3D buildings and scenery add to the feeling of taking aim at your opponent as tumbleweed (not included) blows across the tabletop, before firing off one of the game’s different weapons, all of which handle differently and can give you the edge in the shootout. The competitive original was followed by a co-op crossover with the zombie-killing action of Dead of Winter, which added a tower of tumbling undead into the mix. No matter which game you’re playing, you’re in for some disc-pinging perfection.

Buy your copy of Flick 'em Up here. 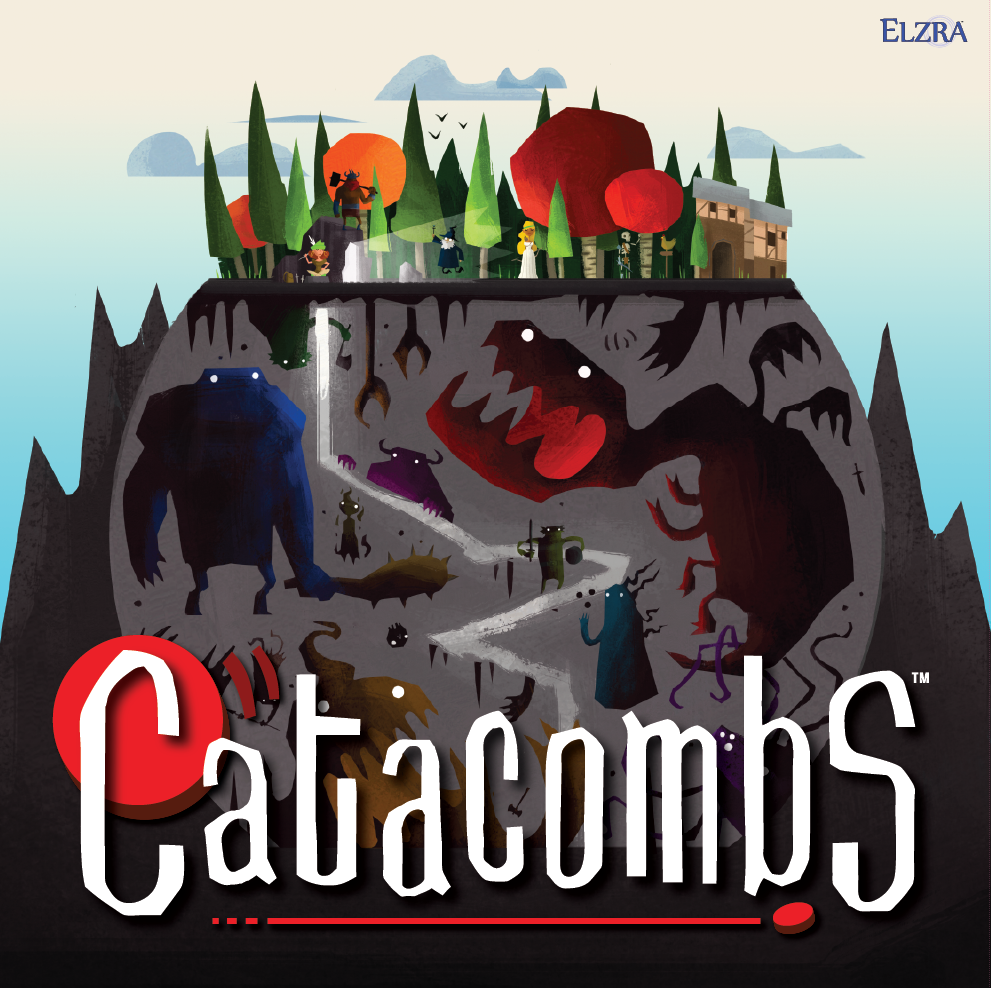 Dungeons & Dragons meets discs and dexterity, Catacombs applies co-op finger-flicking to the fantasy dungeon-crawler as a group of heroes heads underground to defeat the evil lurking beneath a town in peril. One player takes control of the monsters and faces off against the allied adventurers, who unleash their sword-and-sorcery skills by pinging discs at their enemies. Like any good fantasy yarn, the team can stop off to expand their available equipment and items, as well as picking up helpful companions, hoping to take down the Catacomb Lord before they’re all defeated. This year’s Catacombs Conquest is a simpler, faster spin-off designed as an introduction to the longer and more complex original, but either game is worthy of a space in your Bag of Holding. 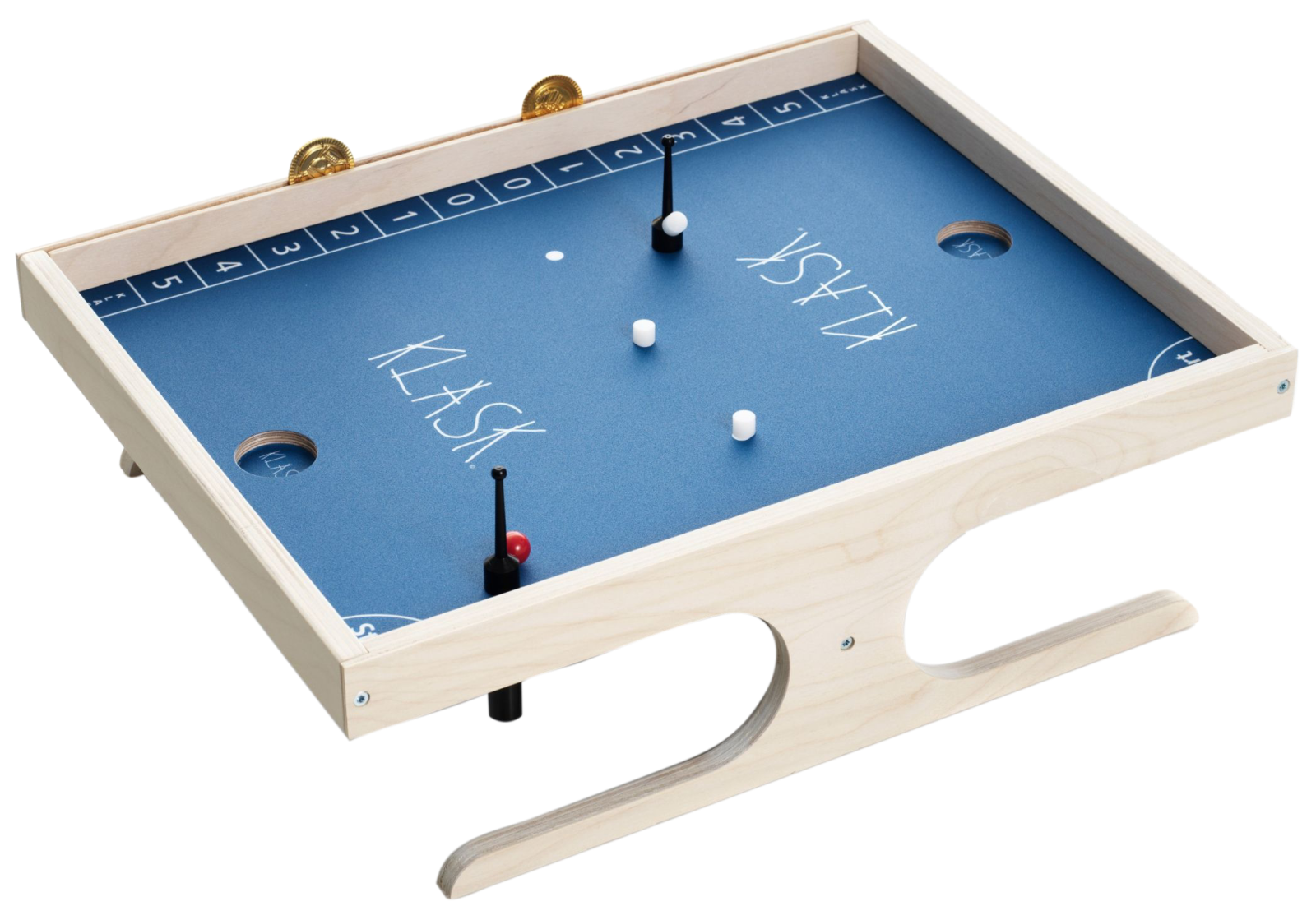 Klask is a magnetic marvel that it’s impossible to avoid the attraction of. Players control a black magnet from underneath a wooden pitch, trying to knock the ball into their opponent’s goal – a hole in the floor. Easy enough, right? Not quite – three white magnetic pieces sit along the centre of the pitch, ready to jump onto a player piece that strays too close. Get two on you and it’s a point to your opponent – the same goes for dropping your piece into your own goal (it’s easier done than you’d think). Often as fast and furious as air hockey or table football, but with the added twist of its obstacles and magnetic controls, Klask deserves a place among the best competitive table sports out there.

Buy your copy of Klask here. 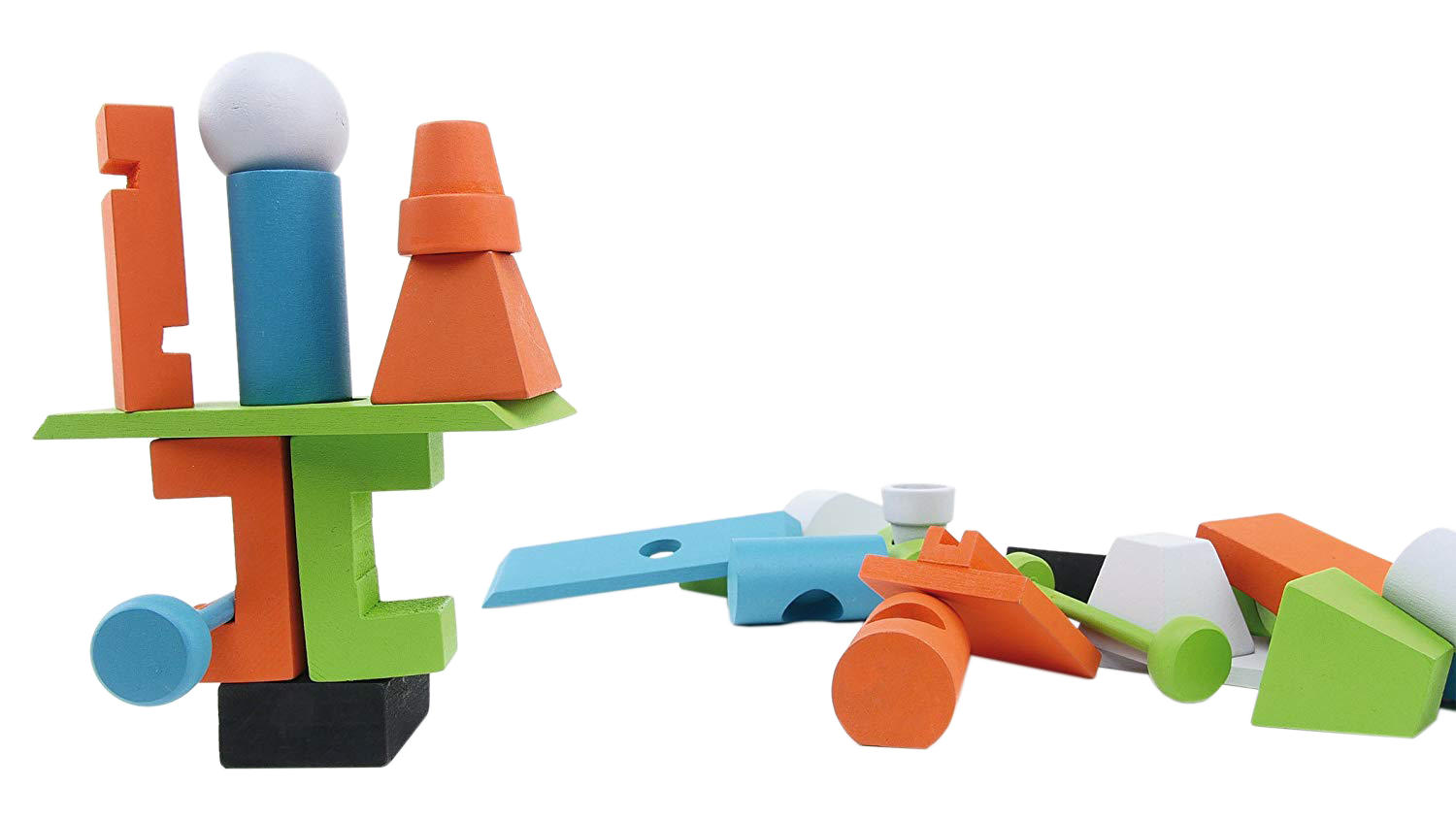 Even before Jenga laid its first wooden brick, building towers from wooden objects and then watching them come crashing down has been fun. Junk Art is one of the modern successors to the classic brick-puller, packing in a dozen different ways to stack up its colourful shapes (which can be found in both plastic and wooden variations). Whether you’re racing to create a specific combination of blocks before your rivals or trying to build the tallest sculpture around, watch your abstract creation take form – and hopefully not fall over – is massively entertaining. And who knows? You might just create a masterpiece. 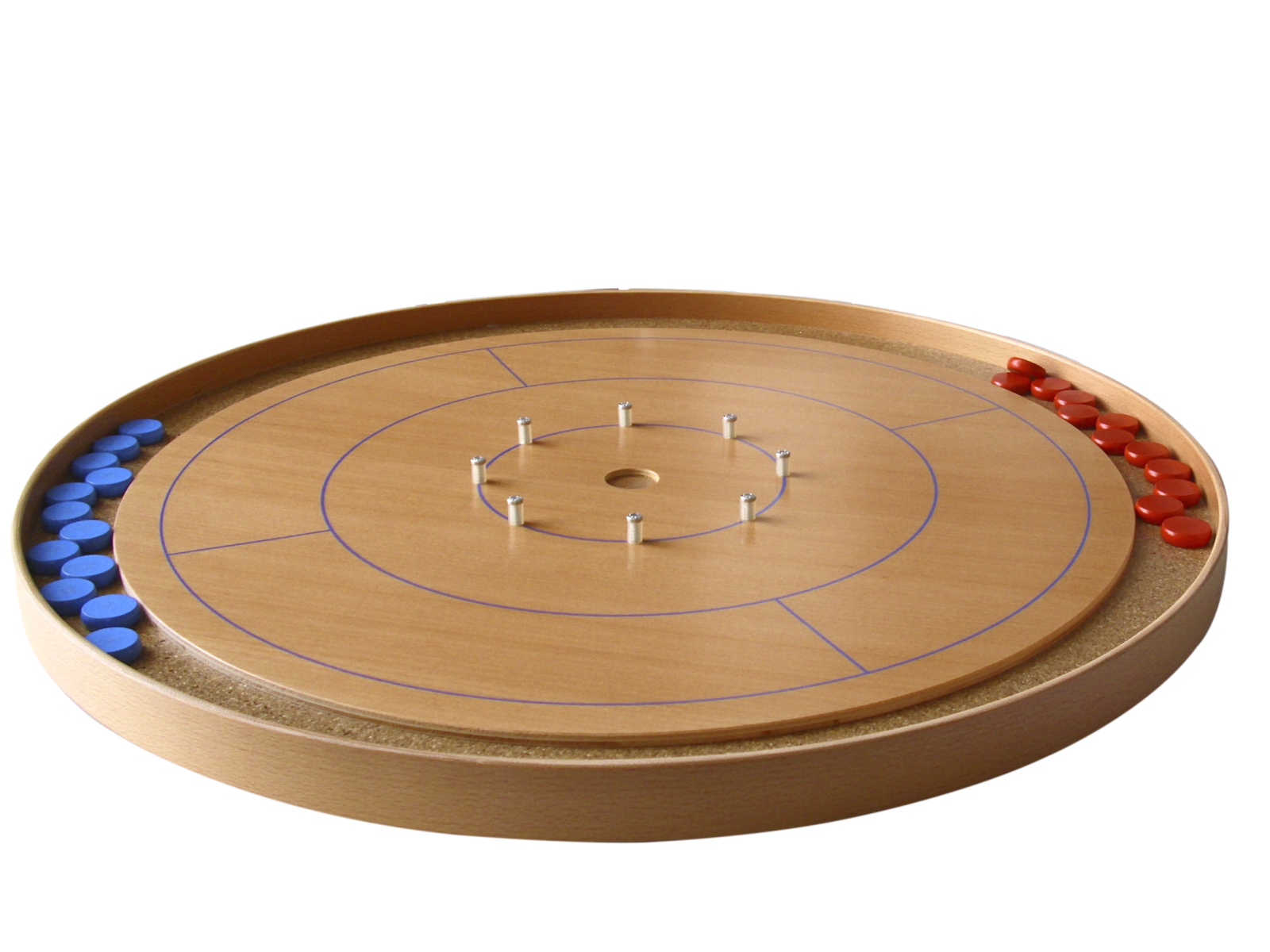 An oldie but still a goodie, Crokinole has officially been around since the end of the 19th century (although it likely existed before then) and continues to stand up as one of the purest dexterity experiences going. It’s essentially curling in miniature ­(and minus the brooms and the need for warm underwear): players carefully flick their discs around the circular board, trying to land them in the highest-scoring areas and knock their opponents’ own discs out of valuable positions. Crucially, contact with other discs is encouraged – failing to touch an opponent’s piece voids that player’s shot. Like a lot of older traditional games, there’s dozens of house rules and variations that change up the specifics, but Crokinole’s basic flicking fun is well worth experiencing in whatever form it takes. 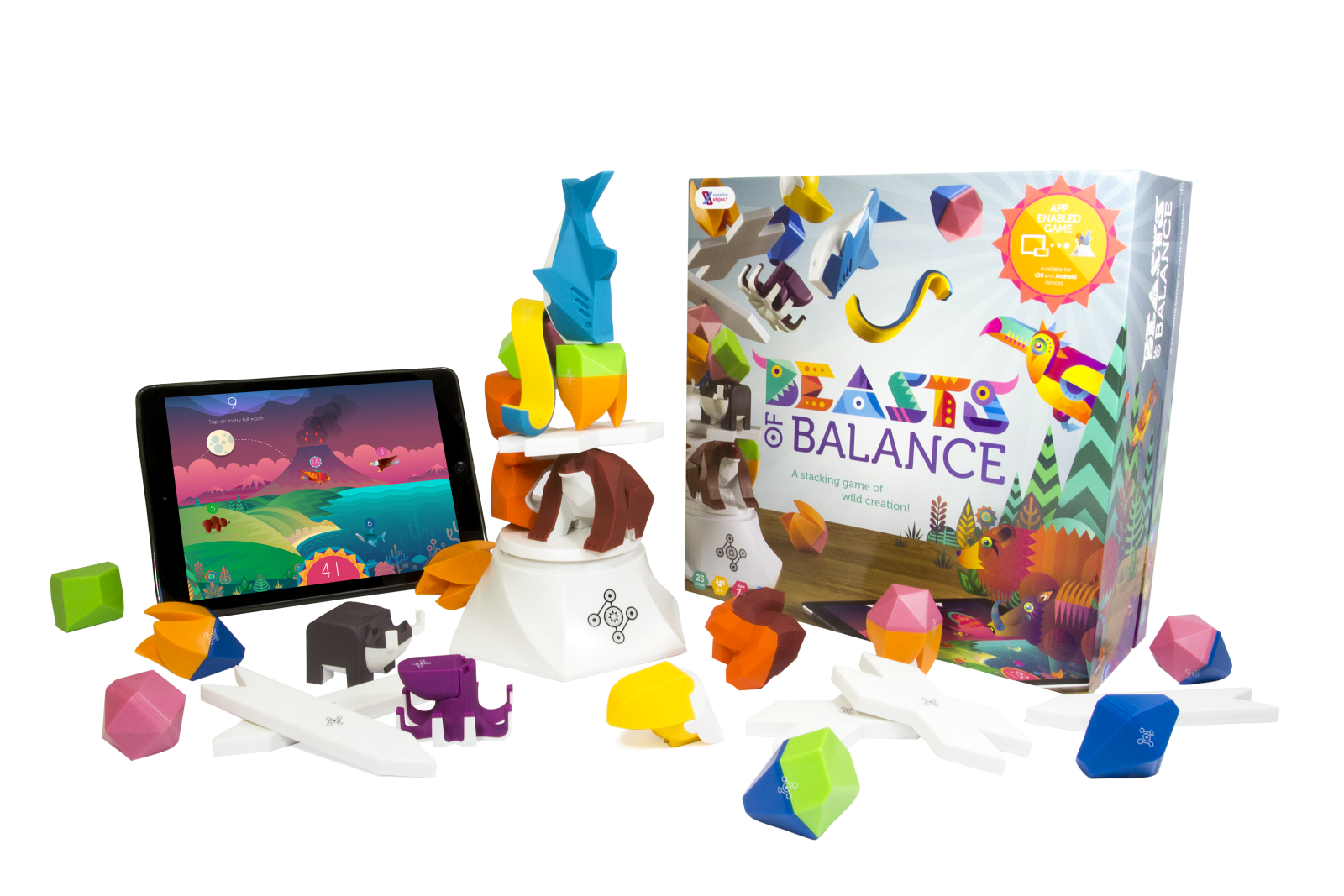 A high-tech take on a traditionally analogue genre, Beasts of Balance combines the physical with the digital in a game of skillfully stacking animal shapes on a plinth while also making strategic choices on the required companion app. Over the course of a match the animals can evolve and change, adapting to different environments as they take on new surreal and fantastical forms. Non-beast pieces, like miracles and artefacts, give players the chance to boost their animals or weaken their opponents’ – as long as they can avoid the increasingly wobbly stack falling, that is. Smart, eye-catching and, most importantly, fun, it’s a sure sign that one of the oldest gaming genres is here to stay. 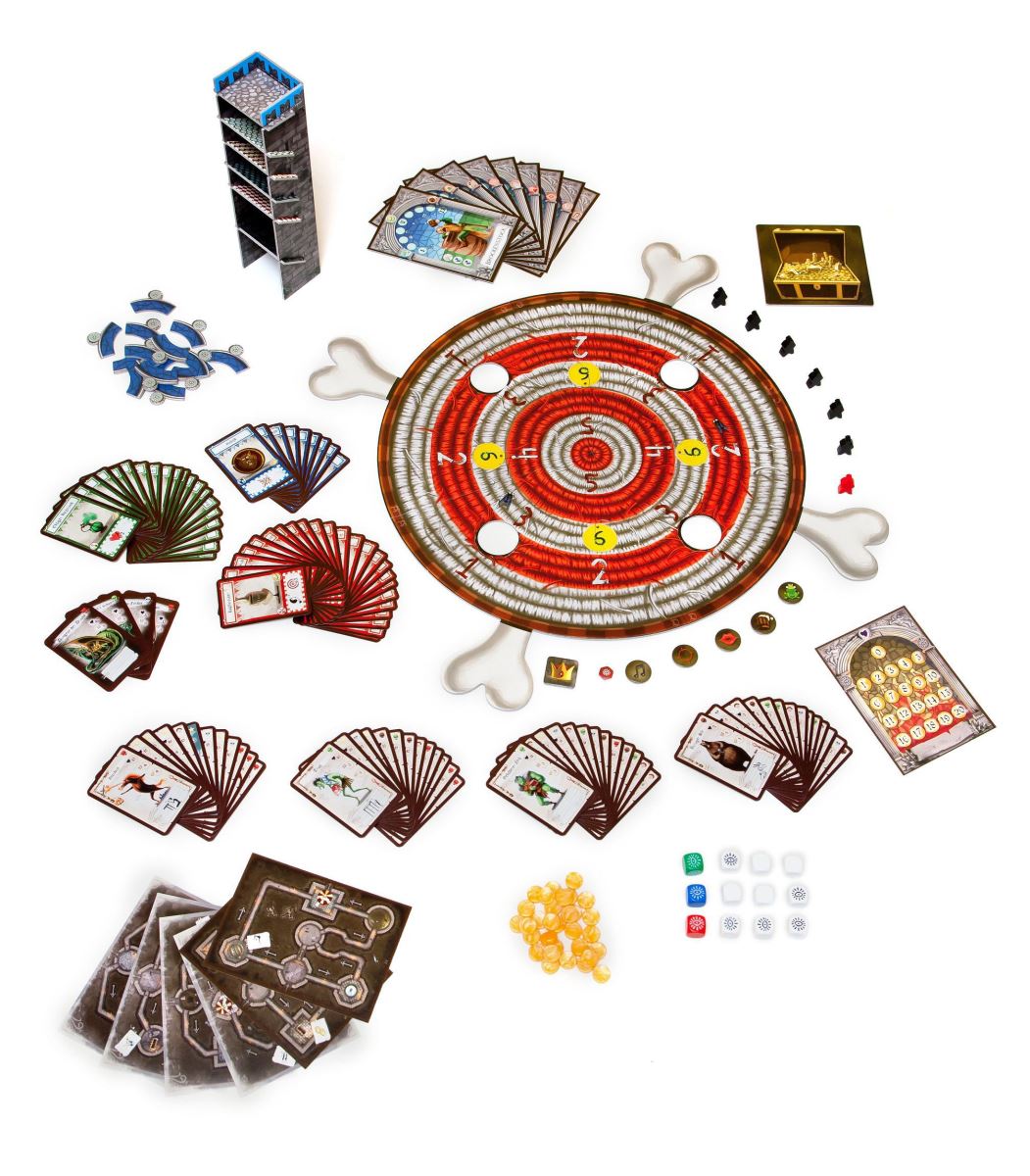 In Dungeon Fighter, you travel through a fantasy dungeon, throwing dice to battle monsters and– wait, wait, come back! It might sound like the same old thing, but in Dungeon Fighter throwing dice isn’t a forgettable task in the middle of the fun – it is the fun! You see, in this game you’re throwing dice like you’ve never thrown before, bouncing the resilient cubes on the table, lobbing them from under your leg, heading them like a football, with your eyes shut… the list goes on. The aim (though aim might be an optimistic word here) is to land a die on a target, where its result might activate a special ability. As you venture further into the dungeon, the monsters will get harder and harder, requiring ever-more complex feats of die-chucking to defeat. Throwing dice has never made you gasp or laugh harder. 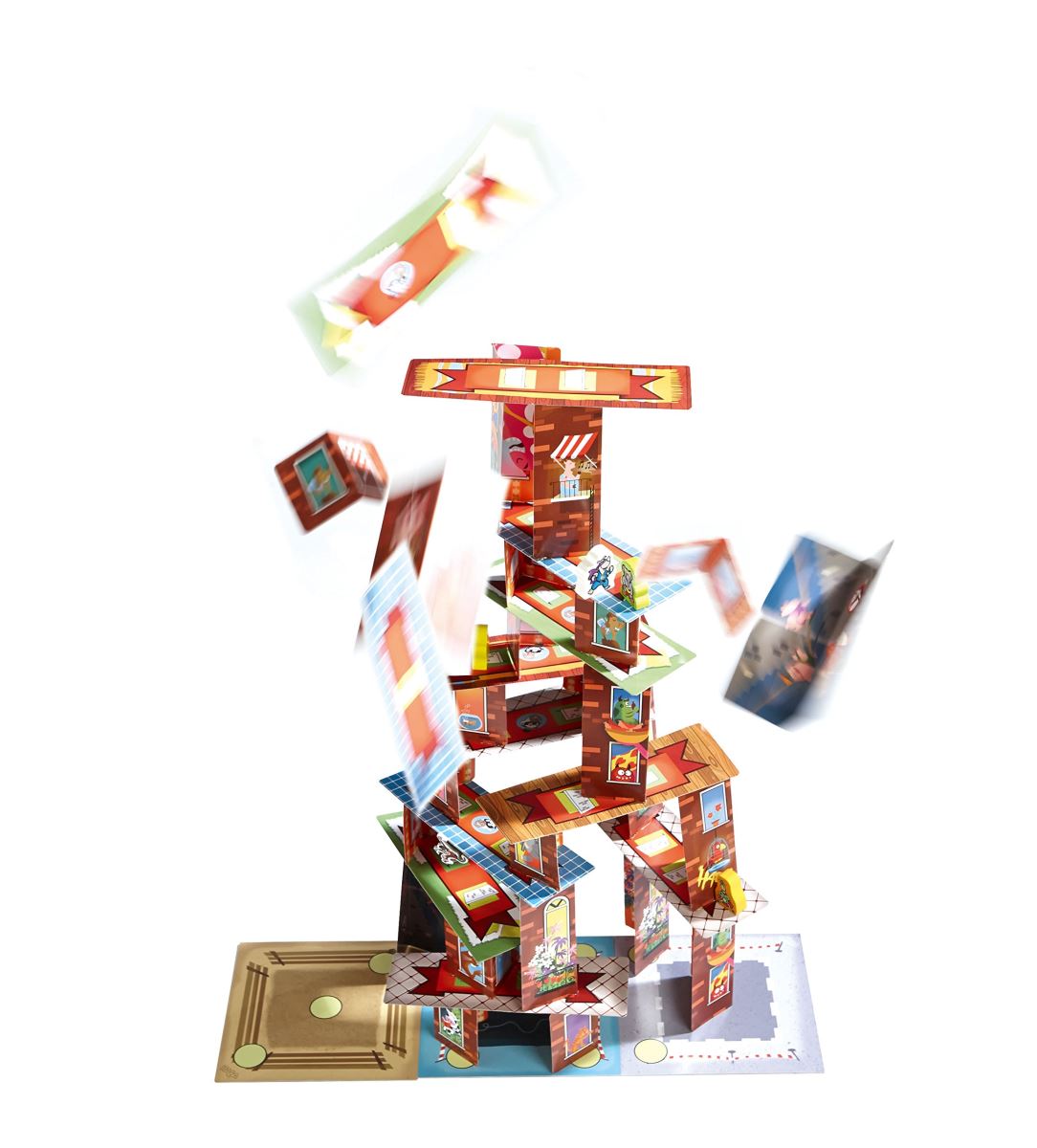 Move over Spider-Man! So long, Batman! Ta-ra, Ant Man! There are new animal-themed superheroes in our heart and they’re Rhino Hero, Giraffe Boy, Big E. (we’ll let you figure it out) and Batguin. These are the stars of this feel-good build-it-then-climb-it showdown, a funnier sequel to an already hilarious superpowered delight. Place floors and walls to an increasingly unstable skyscraper, before bounding your anthropomorphic ally up its teetering stories to prove you’re the most super of the supers. Along the way, you’ll face the threat of spider monkeys hanging off the already wobbly cardboard structure – as well as the occasional need to knock one of your rivals down a floor if it comes to fisticuffs. The wider buildings are bigger and more ridiculous than the first Rhino Hero, leaving plenty of space for the players to dance around each other, but it doesn’t really matter who’s at the top when it all comes crashing down. You’ll probably be laughing too much to remember. 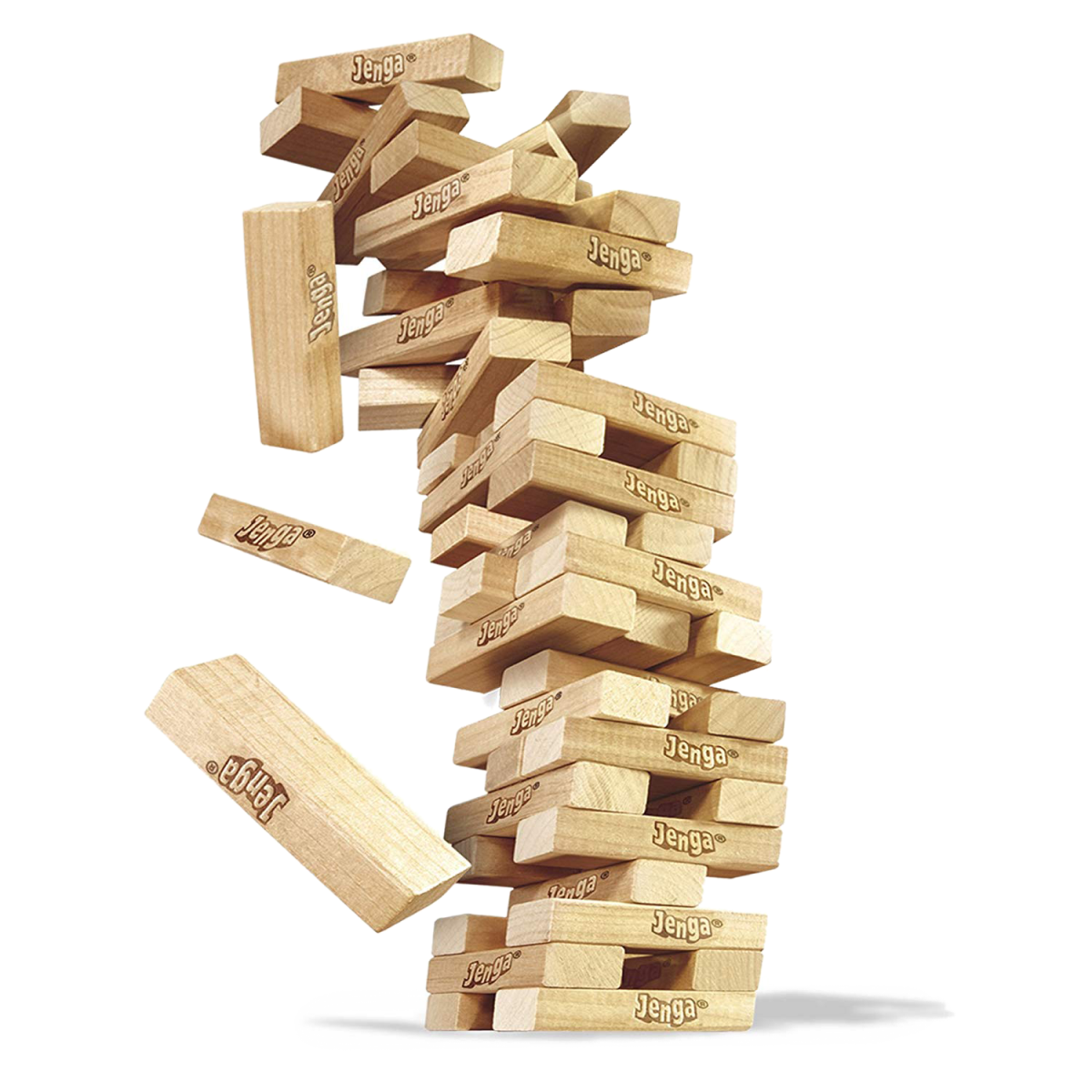 Jenga barely needs an introduction – it’s Jenga. You all know what it is and how to play it, even without reading the rules. But as simple and pleasing as the original tower-building game is all these years later, it’s for its inventive second life in other games that we’ve included it on this list. Who would’ve expected a tower of bricks to become one of the cleverest replacements for dice in roleplaying games? Horror RPG Dread proves that gently tapping a brick out millimetre by millimetre – or suddenly yanking it out – is the perfect way to drum up the tension and shock of a character attempting a task, with the tower’s collapse leading to their own demise. Meanwhile Star Crossed makes it a symbol of the romantic tension between two characters, as their unspoken attraction builds to the moment where the bricks tumble down and they finally act on their feelings. Even when it’s not being used to push the boundaries of gaming forward, who doesn’t love seeing a tower explode onto the table?

Buy your copy of Jenga here.