Ticket to Ride: Full Steam Ahead Tom Randell goes loco for one of the most popular tabletop games around, in this look at Ticket to Ride

In 2004, games publisher Days of Wonder released Ticket to Ride onto an unsuspecting gaming public. Since then, this beautifully unassuming title has become one of the top “go to” games for gamers looking to introduce their non-gaming friends to the hobby. Best described as a gateway game, this modern-day classic is easy to learn, simple to teach and is based on a theme or concept that virtually anyone can get their head around – train journeys.

Designed by Alan R. Moon, Ticket to Ride places you in the United States of America and tasks you with claiming rail links between specific cities on the board. When you complete a route, represented by a ticket, you earn points. At the end of the game, the player with the most points wins. 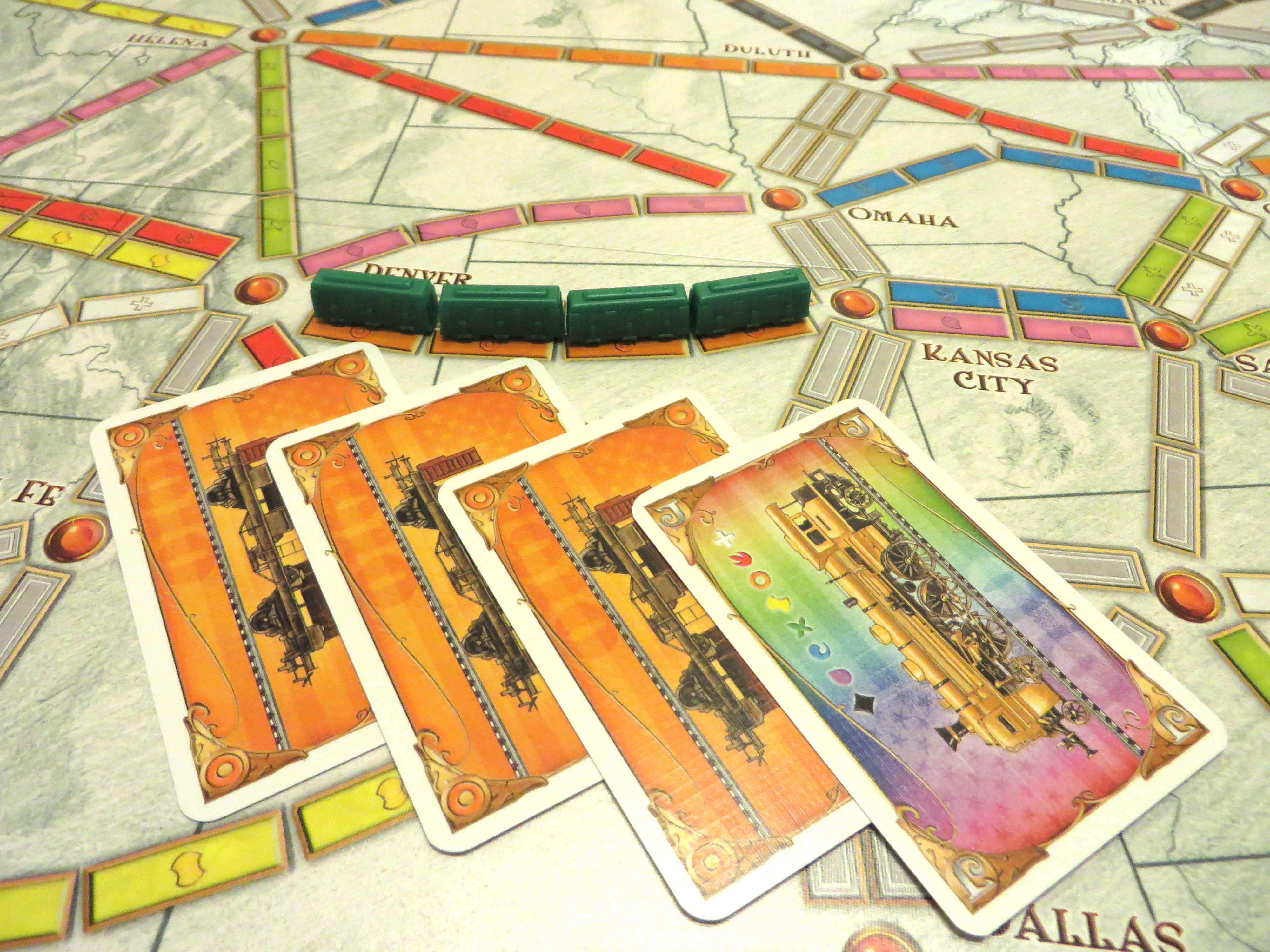 Ticket to Ride was such a dramatic success that it received the coveted, German title, Spiel des Jahres or Game of the Year 2004. The award is one of the greatest honours among the gaming community and only the most popular of games earn the title. As a result, reviewers across the globe united in agreement that Ticket to Ride was, without doubt, a keeper.

Despite its success, it wasn’t until the release of the game’s online version that the title finally became mainstream! Available for free through the Days of Wonder website the game’s popularity steadily grew as online gamers took to it like wildfire. As the online Ticket to Ride community grew, so too did the number of physical copies sold. Familiarity with the game, provided by the online version, firmly placed the game in the minds of those looking to purchase a fun and family-friendly game for their loved ones.

Last year saw the tenth anniversary of Ticket to Ride. To celebrate the game’s first decade, Days of Wonder released a brand new Anniversary edition. Comprising an oversized box and board, uniquely designed train sets for each player with a storage tin for each - this edition provides great value for money and looks amazing on any gaming table!

Also, to coincide with the tenth anniversary, Days of Wonder launched its Ticket to Ride World Championship, which attracted over 25,000 entrants worldwide. In preparation for the world final, game stores across the globe held regional qualifiers to put forward players to the nationals. The UK final took place in May 2014 at The UK Games Expo. The winner, Peter Howitt, later went on to represent the UK in the World Championships in Paris, September 2014. 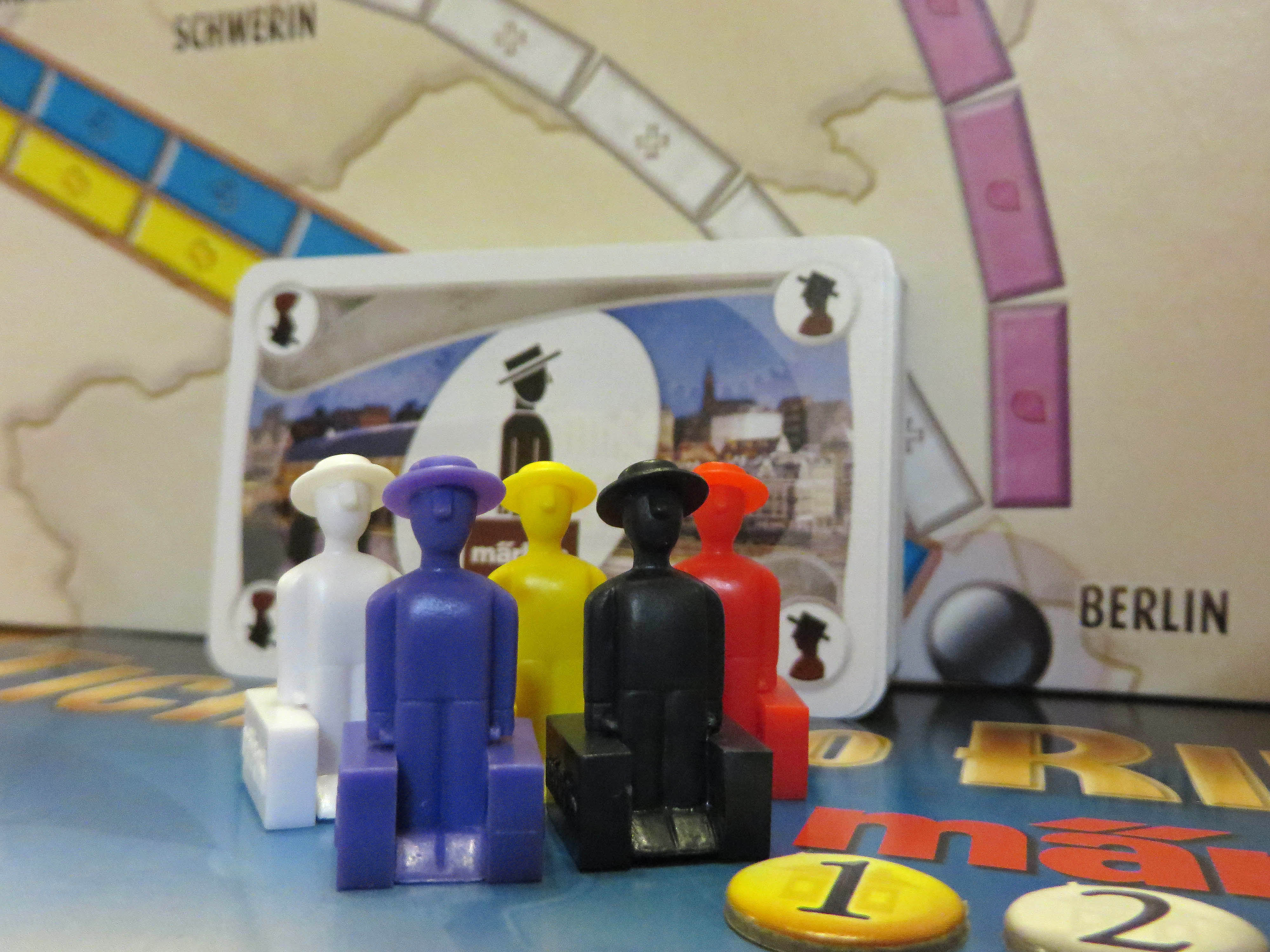 At the conclusion of the 2014 World Championship, Erwin Pauelsen of the Netherlands was crowned champion and awarded the Golden Train Trophy. Alas, the final game was marred with allegations of cheating. The event had been broadcast, live, across the internet and viewers quickly reported concerns about a number of irregularities. An investigation into the allegations resulted in the eventual resignation and surrender of the title by Pauelsen.

Despite the unfortunate circumstances, the gaming community was pleased to see the title of Ticket to Ride World Champion pass to Kenneth Heilfron of the USA. The popularity of Ticket to Ride and its ability to bring people together from all over the globe is truly spectacular. Games with such social involvement are few and far between and without this enthusiastic community, the irregularities of the final game may never have come to light. In fact, Days of Wonder summed it up best in their November 2014 press release:

“The board game world, specifically the Ticket to Ride community, has always been one filled with friendly and fair competitors. It saddens us that this dishonest behavior occurred, especially given all the time and energy put into the Championship – not only by the company, but by the hundreds of volunteers who helped run Ticket to Ride events worldwide. Days of Wonder is thankful to those who have helped to uncover and resolve this situation in the most honorable way possible.”

Since 2004, there have been numerous reinventions and expansions for Ticket to Ride and each new addition takes you on a new and interesting journey around the globe. 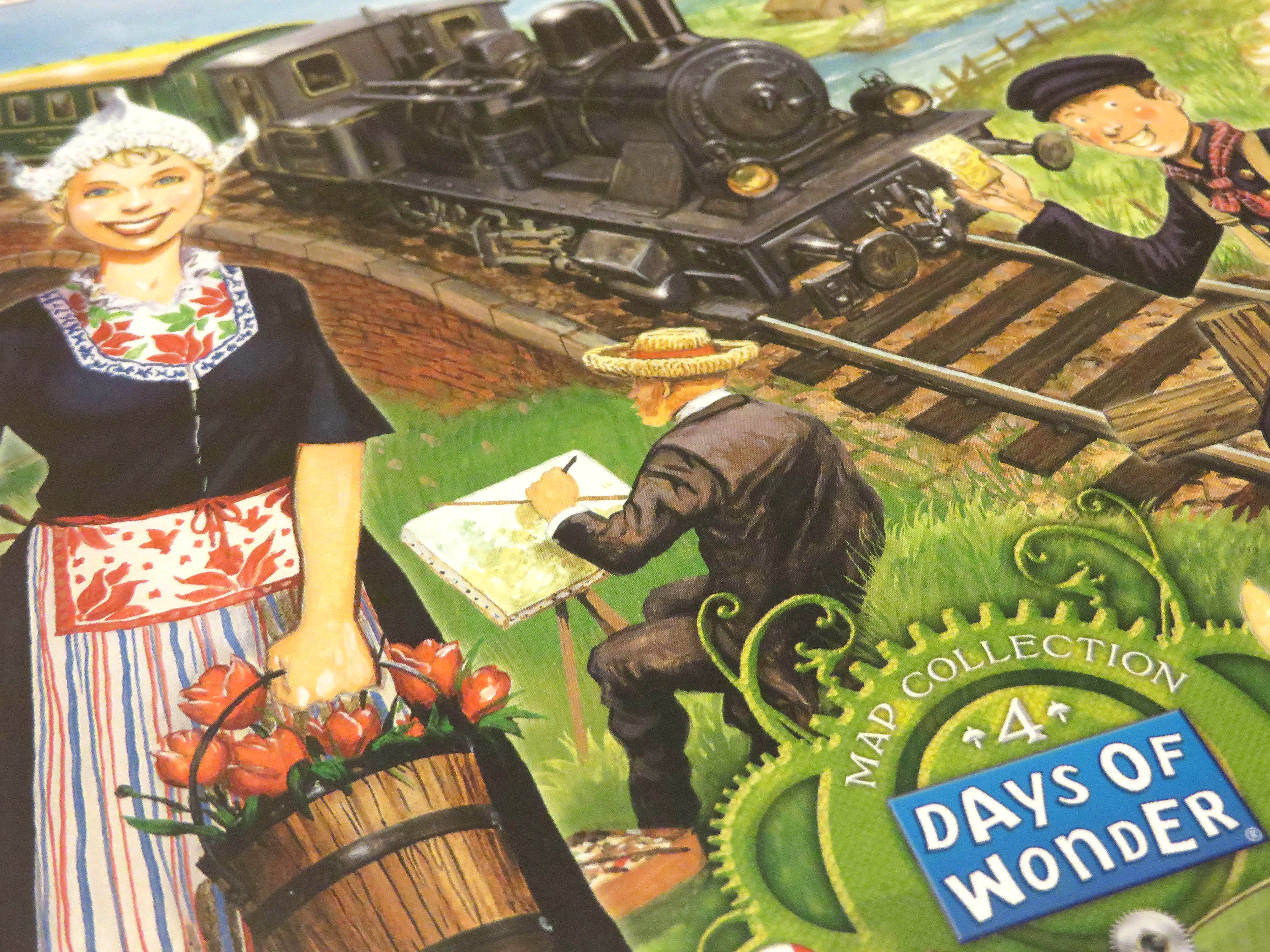 In 2005 Days of Wonder released the Ticket to Ride: Europe, standalone, base game that adds new and interesting decisions and challenges. Ferries require the use of a certain number of locomotives, claiming tunnels can become randomly more difficult, and stations let you use a track that another player owns.

Not long after Europe, Days of Wonder pulled Märklin out of the bag. Set in Germany, this version includes cards that depict various Märklin train models and adds new mechanics for passengers and merchandise. Players aren’t just racing to claim route sections, they’re trying to be the first to claim tokens from the board by placing, and later moving, their passengers.

Finally, bringing its multi-coloured railway networks to Denmark, Finland, Norway and Sweden. Ticket to Ride Nordic Countries uses mechanics seen in both the USA and Europe, but specifically focuses and tightens the gameplay to cater for only two to three players.

In 2011, the first of the Ticket to Ride map collection appeared. Each volume provides expansion rules, new cards and a double-sided game board. Volume one - entitled Team Asia and Legendary Asia, introduced team play and mountain passes. Volume two – India and Switzerland, introduced tickets that provide bonus points for connecting cities with two different routes and the idea of connecting a city to one of the surrounding countries. Volume three – The Heart of Africa, takes you into the wilderness of Africa and introduces terrain cards that double the value of a claimed route.

Volume four – Nederlands, features a multitude of double tracks that are always active. It also adds an economic element in the form of bridge tolls and loans. For each route you claim, you pay a toll to the bank. However, if someone has already claimed the first side of a track then you pay that player the toll to claim the other side. As you’d expect, the coins you hold at the end of the game are worth points, and loans act as penalties. 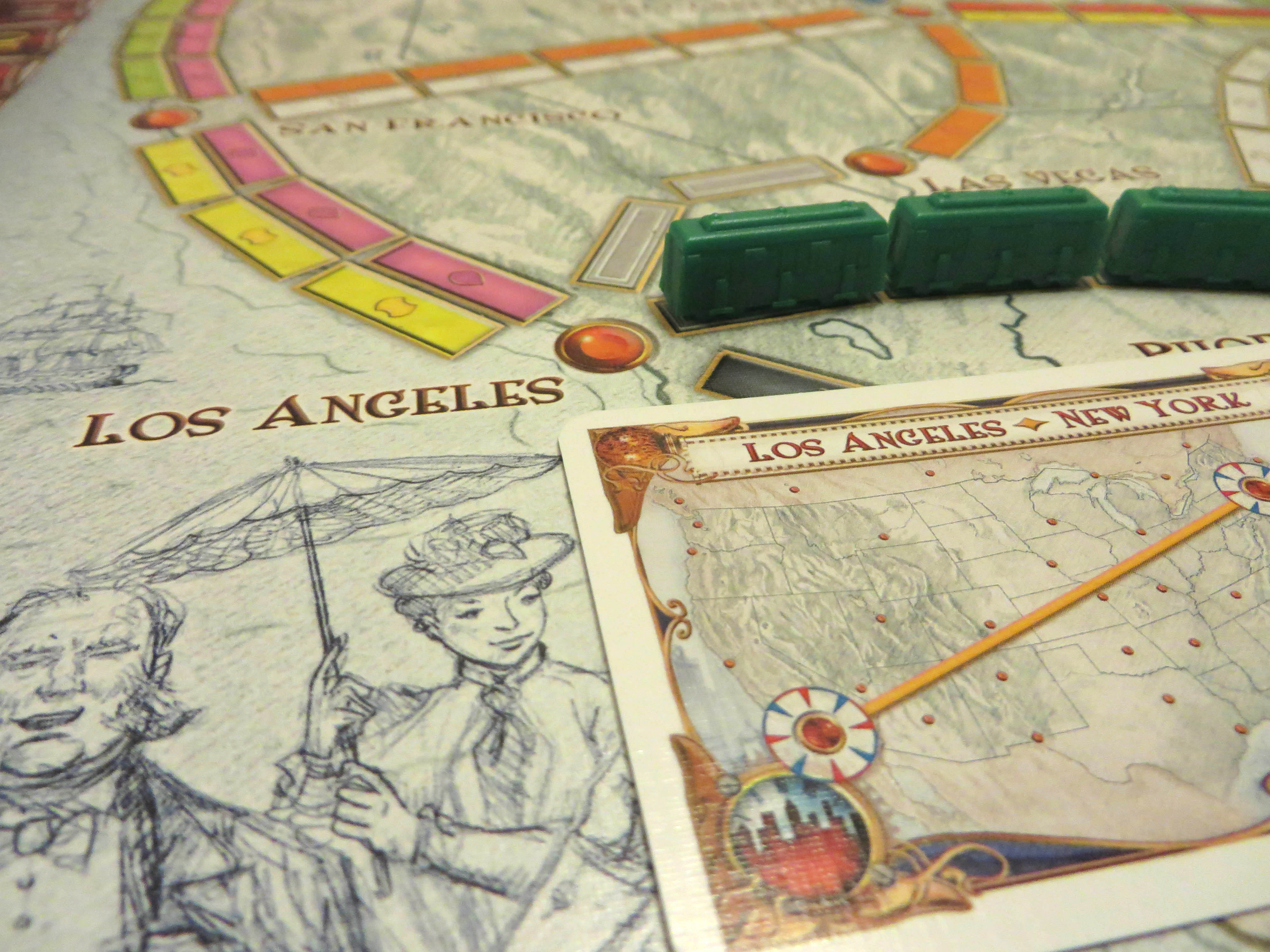 If you’ve never played Ticket to Ride then you’re likely wondering what all the fuss is about. Why would 25,000 people go out of their way to take part in a World Championship? Why do millions of people now own a copy? And what’s with all the expansions?

The truth is - Ticket to Ride is so elegant and easy to learn that virtually anyone can just pick it up and play. A single game weighs in at around 45 minutes to an hour, which means you can even play it during a lunch break. So, with that said, let’s take a look at how you play the basic game.

At the game’s start, you receive a starting hand of four carriage cards and a set of three destination tickets. Each destination specifies two locations you need to link. Before you begin, you can discard up to two destination cards, but must always keep at least one. Tickets that cover a longer route, for example from one side of the board to the other, are harder to complete and worth more points.

On your turn, you perform one of three actions.

• Take up to two carriage cards

• Claim a section of track

• Take three new tickets and keep at least one

When you’ve taken your action, your turn is over and play proceeds to the next player.

A selection of five, face-up, carriage cards are placed next to a face-down draw pile at the side of the board. These cards come in eight different colours and there’s a number of locomotive cards that you can use to stand in for any colour carriage.

Selecting the right colour carriages is very important in Ticket to Ride because you use them on subsequent turns to claim track sections and build your routes. 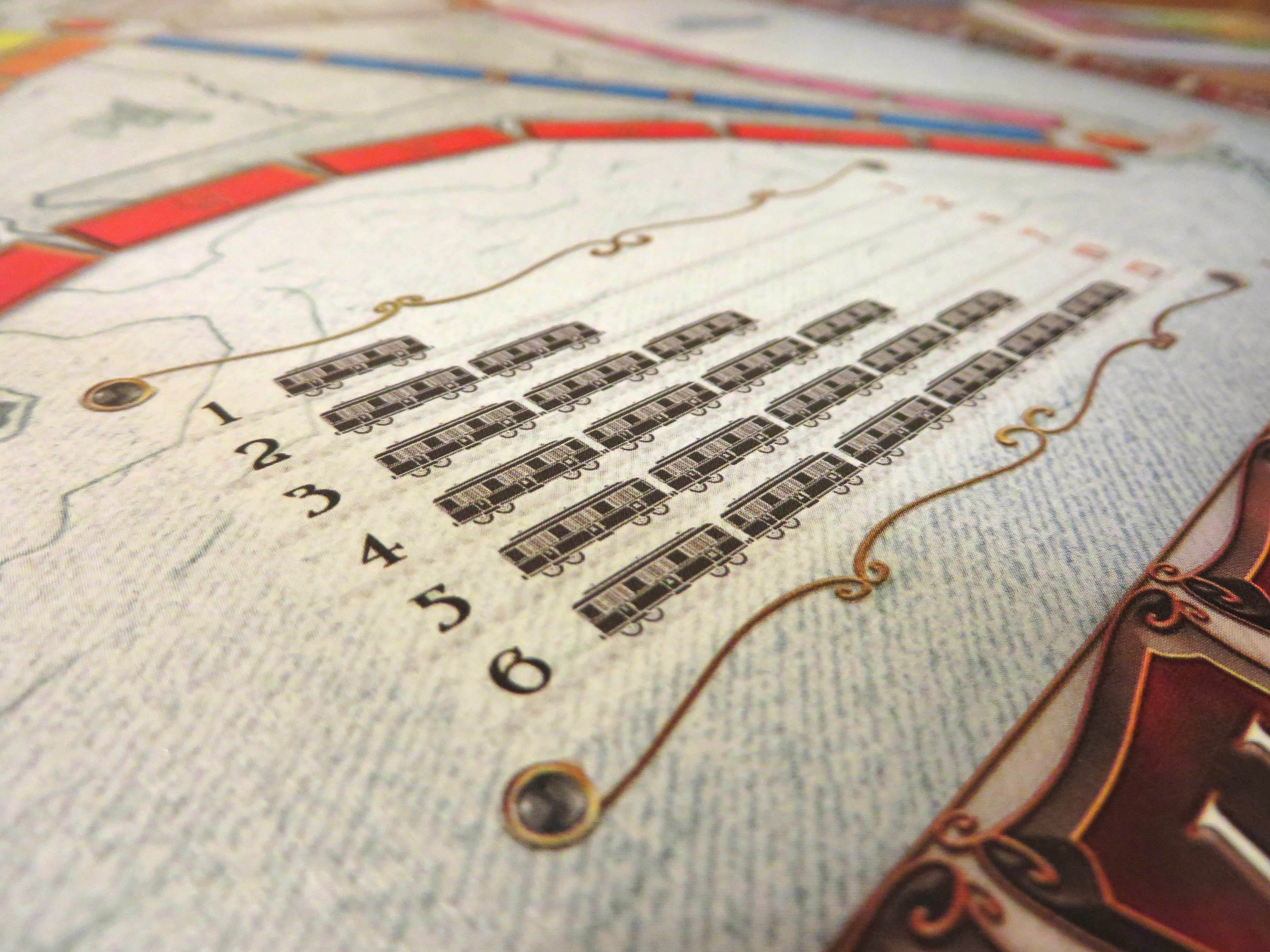 The placement of plastic carriages indicates ownership and when you own a section of track, other players cannot claim them. Each destination ticket card identifies a route you need to claim. In order to ensure you score each ticket, you need to claim different sections of track until you can trace an uninterrupted route, of your colour, from the tickets start location to its destination.

Eventually, when you’ve formed an unbroken route from one end to the other, you complete the ticket. Completed tickets are kept secret until the end of the game. This element of secrecy adds tension to the game because you’re never quite sure what your opponent has.

You Have Now Arrived at Your Final Destination, This Game Will Terminate Here

As play proceeds, the number of plastic carriages you have in-hand dwindles. Eventually a player will place enough carriages that they’re left with less than three available. When this happens, all other players get one last turn and the game ends.

It’s now time to sit back, breathe deeply, and admire the carriages weaving across the map. Admire the spurs that break off from the main line and, above all, admire the network you’ve created! Ticket to Ride is not only beautiful through its simplicity, the artwork and end-game are visually beautiful too!

Once you’re done admiring the view, it’s time to calculate scores and record them on the score track around the edge of the board. To start, the player with the longest, uninterrupted, line of carriages receives the ten point Longest Route award. Next, each player scores the track sections they’ve claimed. The longer a track section the more points it’s worth. Available points range from a single carriage section earning one point to six carriages earning a massive 15 points.

Finally, all players reveal their complete, and incomplete, tickets and score, or lose, their printed value. The player with the highest score at the end of this process is the winner.

A game of Ticket to Ride starts out as a friendly train journey across the US and will suit nearly any family gaming session. However, the gameplay is flexible enough to offer a decent level of strategic depth. As the turns go by, you’ll ask yourself “is my opponent heading towards Washington?”, “should I let them get there?” or alternatively “do I play the peaceful game?”

To be honest, it’s entirely up to you how you play Ticket to Ride - but always remember, once you block someone, they’ll be out for revenge! With globe-spanning, expansive, gameplay and a community of players who pull together in celebration of the game - Ticket to Ride is a title that every gamer should have on their game shelf in one form or another. If you’ve never had the pleasure of playing this multi-coloured route builder, it really is worth taking the time to give it a try. Games like this aren’t released very often and very few turn into one of the most famous board games in the world!

Looking for more Ticket to Ride?