The Walking Dead: All Out War review 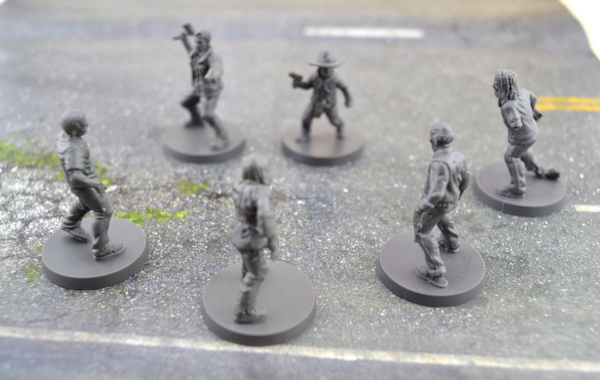 The Walking Dead: All Out War

Mantic’s new miniatures game The Walking Dead: All Out War is named after the storyline in the zombie-horror comic book series that sees hero Rick Grimes clash with brutal antagonist Negan. Fans of the TV show adaptation will recognise Negan as the baseball-bat-wielding baddie whose gory violence caused shock and controversy in the season seven premiere in October. With this in mind, All Out War is fittingly named, encouraging frantic, bloody action and desperate moves over slower tactical play.

Two players – although the game can also be played solo – take up the roles of warring survivors. Included in the core set are Rick and Carl, along with Derek, Patrick, Sandra and Liam. They are dropped into a setting populated by the roaming undead, also represented by miniatures. 12 walkers are included in the base set, in varying states of decomposition and (un)dress. The miniatures both dead and alive come unpainted but are highly expressive in both expression and pose, in fitting with the comic book source material, and are well sculpted. One minor letdown comes from the use of softer plastic, as we suffered a curved baseball bat and bent knife out of the box. The dice, too, are of variable quality, with some quite poorly debossed and painted, making the symbols less comprehensible.

The two groups compete to retrieve the most supply markers by the time the included threat tracker reaches its maximum, rising as the result of the survivors' actions or specific event cards drawn at the end of each turn. Of course, the other way to win is to dispatch the enemy team (or allow the zombies to do it for you), but at the moment there’s otherwise little variation in the objectives required to win or lose – something that will hopefully be rectified in future expansions and new scenarios.
Players alternate moving their figures using the bundled range ruler, choosing to sneak or run. As you might expect, running causes noise, which attracts unoccupied walkers within a set distance.

Zombies automatically shamble a fixed distance in a straight line until they encounter a survivor or wander into an obstacle, such as a car or barricade, several of which come included in 2D card form with the core set. It’s a nice little touch that helps the undead seem truly brainless, and allows for tactical use of noise-making – you can run to lure walkers into combat with enemy survivors or away from your own team.

At the end of a turn, an event card is drawn and the various effects are resolved, from raising the threat level to bringing more zombies stumbling into the play area. Initiative swaps each round, and the player with control chooses where the undead enter, allowing the scales to shift suddenly when it comes to the dangerous presence of zombies.

Any survivor within each walker's set ‘kill zone’ radius (a handy template is included) is automatically moved into combat, which takes place as a series of dice rolls dependent on the character, their equipped items and other environmental factors. Defeated zombies are merely knocked down onto the ground and can potentially rise again at the end of a turn thanks to a deciding dice roll – but if survivors score a critical hit or finish the walker off while they are down, the miniature is removed from play completely. This can go the other way, too, as killed survivors are replaced by walker figures unless they are defeated with a critical hit. In which case we guess there’s not enough left of them to get back up again. Gross.

Combat is fast and furious, and the dice rolls are easy to understand and balanced to make the walkers feel powerful without being overpowering. To simulate the danger of zombie hordes, the number of attack dice rolled increases exponentially with every undead attacking the same character, meaning the first zombie rolls one die, the second two, the third three and so on.

The second action of a character’s turn can be used to rummage for supplies or fire a gun, if they have one. This plays off the element of noise, causing a more widespread ‘mayhem’ effect, which draws every zombie on the board towards their position and ups the overall threat level. With guns proving more deadly against the living and dead alike, it makes firing a shot a risky move that can happen in times of desperation or confidence only, rather than every turn. This is intensified by the role of ammo – after firing a shot, the player roll a die to see if the gun is out of ammo. If it is, they’ll need to scavenge for more before they reload.

The characters each have special starting items and attributes that lend them a sense of individuality and highlight their relationships. For example, Rick gains advantages in combat when he is within range of Carl, while Carl’s lucky hat has the ability to defy death – dice roll permitting. The character sheets, cards and rulebooks make use of the comic book’s fantastic art, and there’s a nice variety of items and equipment to bring the post-apocalyptic world to life on the tabletop, from metal pipes and revolvers to football pads and bandages. While scavenging, characters can find themselves coming up empty-handed or randomly attacked by a lurking zombie, making the rush to collect supplies potentially risky throughout and no guarantee of an advantage over your opponent.

All Out War comes with both an advanced rulebook featuring explanations of more complex mechanics such as climbing, zombie bites and terrain, while a short quick-start guide holds newcomers’ hands through a couple of example scenarios and the basics of gameplay. It’s probably best to skip the step-by-step tutorial if you’re at all familiar with miniatures games, as it might seem a bit slow and obvious, but for those attracted to the world of tabletop via the Walking Dead books or TV show, it’s an ideal introduction.

As a miniatures title, All Out War is a fast-paced dash as opposed to the longer tactical battle its name might suggest. The figures and rules capture the last-gasp tone of Robert Kirkman’s comic book series perfectly and encourage a more engaging style of play than many ‘traditional’ miniatures titles, but without a greater variety and complexity of objectives, the franchise’s health on the tabletop is ultimately hard to tell. The rules bring together accessible takes on conventional miniature mechanics with aspects unique to All Out War that fit thematically, making the head-to-head game a joy to play for both tabletop diehards and newcomers.

The Walking Dead: All Out War is an excellent tabletop adaptation of the comic book series, making fantastic use of its source material’s bleak fight for survival and smartly incorporating the presence of the undead to highlight the focus on the fight between the living. Expansions and new scenario modes will tell if it can go the distance, but it’s as good a start as can be.