The Rise of the RPG Box Set: What's in the Starter Set? Roleplaying might be a game of the mind for the most part, but a new trend for RPG starter sets has us asking, what’s in the box?

Words by Richard Jansen-Parkes Main artwork from Call of Cthulhu: Mansions of Madness by Lee Gibbons

As much as we love them, there’s no denying that picking up a new roleplaying game can be a daunting experience. Sometimes the simple prospect of prising open a 400-page rulebook, building your characters from scratch and trying to puzzle together an adventure is enough to make another game of Munchkin seem like an appealing way to spend game night. This is where starter sets come in.

Cheap, cheerful and easy to understand, RPG starter sets are one of the best ways to ensure that a game gets off the shelf and onto the table. They are almost universally designed to offer a gentle introduction to the world of roleplaying, and while they usually lack some of the customisability that comes from full systems, there’s usually more than enough content in the cardboard kits to provide a couple months of solid entertainment.

Writing a starter set is a rather different beast to assembling a core rulebook. We spoke to some of the industry’s leading lights about what makes the difference.

What makes for a good starter set?

Emmet Byrne, Senior Producer at Cubicle 7: “Our main goal when creating a Starter Set is to introduce our games, highlight why the system and world are awesome, give players a great experience, and provide a product with lasting value.”

Logan Bonner, Pathfinder Lead Designer: “A starter set needs to be just that: enough to get you started. For something like the Core Rulebook or Bestiary, we need to make enough of everything to accommodate all levels and variety of play. A Beginner Box lets us get focused and curate a really fun experience for low levels with the most recognizable characters and monsters.”

Mark Seifter, Pathfinder Design Manager: “If possible, a starter set should be capable of working on its own as a self-contained product while also offering an easy entry point for the wider game. The new Beginner Box accomplishes both by using the rules from the full game but limiting and simplifying the number of choices to make it easier to learn.”

Should starter sets be self-contained,or a jumping-off point for the wider game?

EB: We view our Starter Sets as a jumping off point – they’re your first step into these amazing worlds. We include an introductory
adventure that teaches players and GMs how to play the game, but we also try to include city guides and other useful resources like reference sheets and additional short adventures that mean the Starter Set has a lot more utility beyond the first adventure.

What are the absolute essential elements of a starter set?

MS: An RPG starter set needs to come with everything a brand new group needs to build a character, learn the game, and play the game. That means a rulebook for players focused on giving them exactly what they need to build their characters and learn basic gameplay, a rulebook for gamemasters that contains the rules they need and an adventure to run designed to teach the basic game concepts, dice to roll, and then all the accessories that make running those first games easy and fun. Like maps and pawns.

EB: Dice! Ok, not really, but they are vital. The most important thing is to have an adventure that teaches the rules, makes things easy, and leaves the players with good memories. Practically speaking, you also need to have a variety of pre-made characters to cater to everyone, and some short reference sheets to help folks learn the rules. 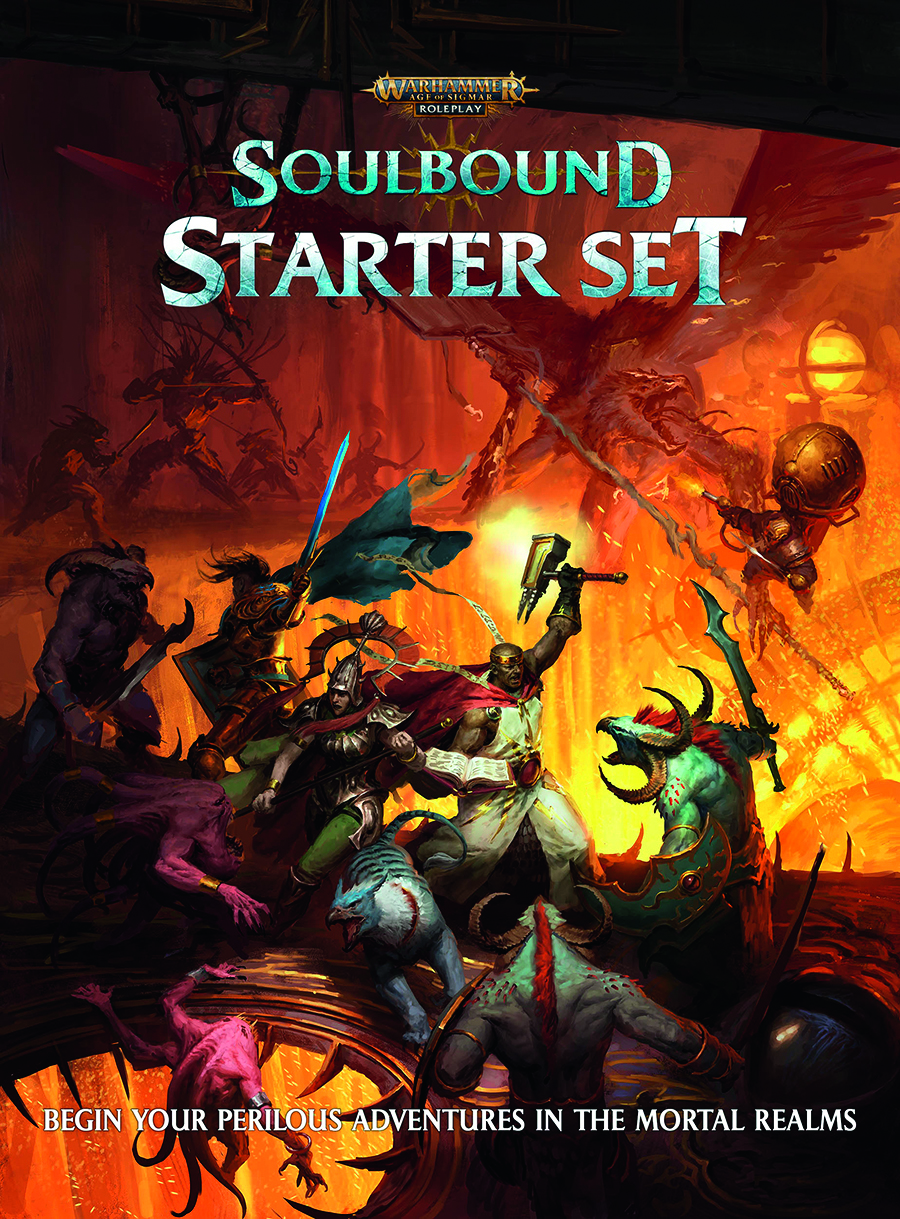 While it may be based on the Games Workshop wargame, you don’t need to already be a fan of Age of Sigmar to enjoy Soulbound. Indeed, the only requirement for having a good time with the game is a willingness to embrace some truly over-the-top fantasy adventures and to have a good time kicking the living hell out of bad guys.

The kit itself is honestly a thing of beauty, with every facet of its contents laser-focussed on getting people rolling dice and stabbing demons as fast as physically possible.

Where most kits come with rules booklets, this one comes with rules sheets. Somehow, the writers have managed to condense down everything you need to get a basic game going onto just three pieces of paper. Martial-focussed characters can get away with just looking at two.

This is an astonishing achievement and helps to set Soulbound apart from the legions of starter sets that still require a fair bit of reading ahead. Of course, all the content that they’ve cut out does mean that the set is fairly limited in scope – you can’t make your own heroes or advance too far into the game – but there’s still plenty here to get you through a decent slice of Sigmar. 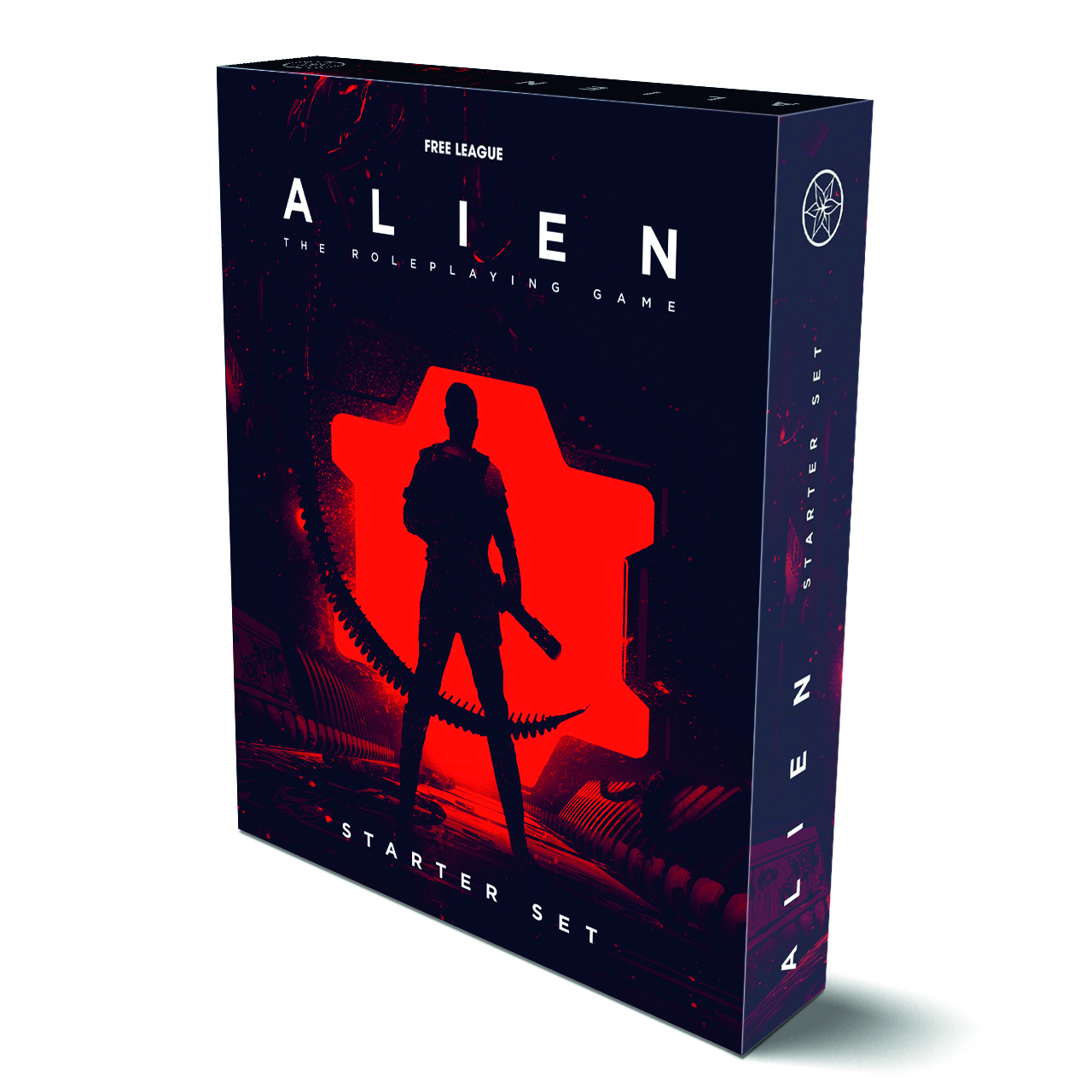 Most of the other starter kits we’re talking about today stick to the classic RPG staples of fantasy and mystery, but Alien take things down a darker alleyway by introducing your table to the blood-spattered world of horror roleplaying.

Set in the same universe as the titular movies, Alien excels at getting the entire table sat on the edges of their seats, just waiting to see what slithering monster is waiting around the next corner. The nature of horror gaming, where there’s a good chance that a character is going to get eviscerated before the night is though, makes it ideally suited to the short, snappy games you want out of a starter set.

The rulebook is a little on the chunky side, but the Chariot of the Gods scenario is solidly written and does a great job of getting things going. On top of this, the entire kit has a slick, stylish design and all the accessories are of the highest quality.

Some might baulk at the comparatively high list price of the set, but the sky-high production values mean that you can’t really complain too much. 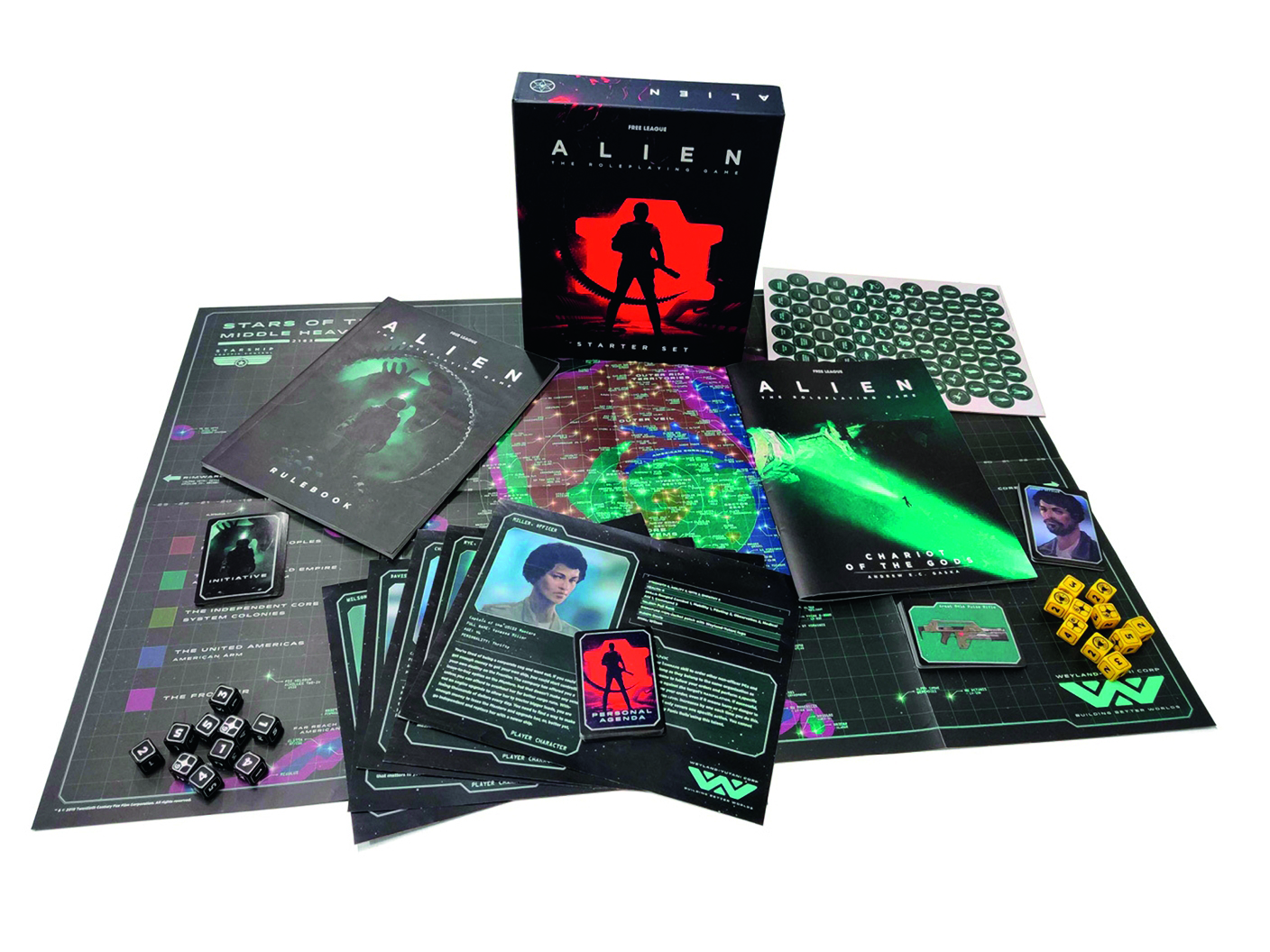 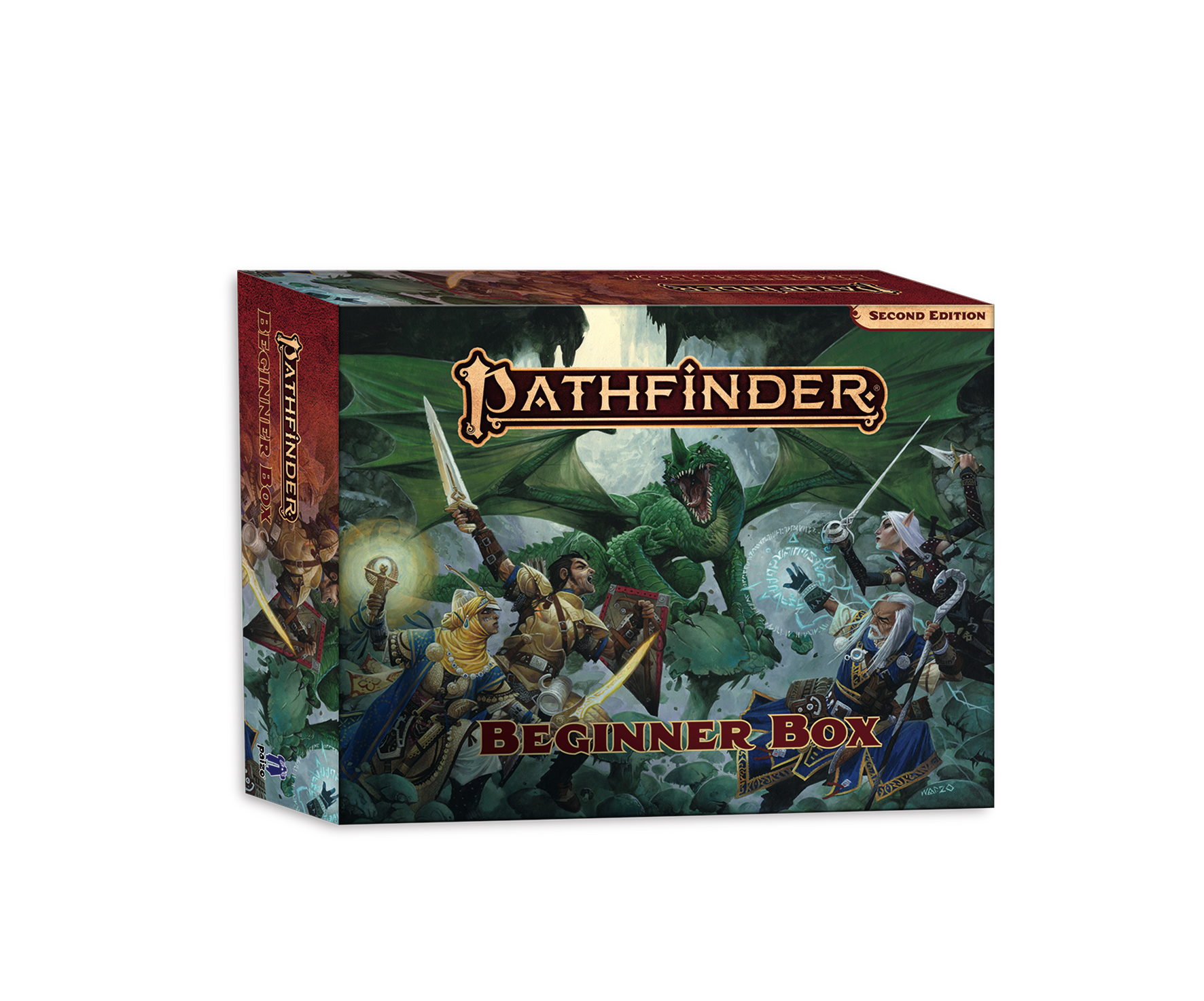 Lusher than a Mwangi jungle and packed with more combat than Friday night in an Absalom tavern, the Pathfinder Beginner Box is by
far the easiest way to get your buddies tinkering with fantasy gaming’s chief bruiser.

Note, however, that ‘easiest’ is not quite the same thing as ‘easy’. Pathfinder has always been a game that prides on the depth and customisability of its mechanics, and this is reflected by a pair of rule booklets are definitely on the heavier side of things.

However, while you still probably need to be at least a bit interested in the fiddlier side of character building to get the most out of the game, the introductory adventure featured in the GM’s guide offers an incredibly solid tutorial. This is a great way to take some of the cliffs out of the game’s learning curve and get you into the action-packed combat that lies at its heart with a bare minimum of fuss.

The appeal of the box set is also enhanced by the fact that it comes loaded with a whole pile of tokens and maps that can be useful long past the time you’re outgrown the starter kit and moved on to even deeper waters. 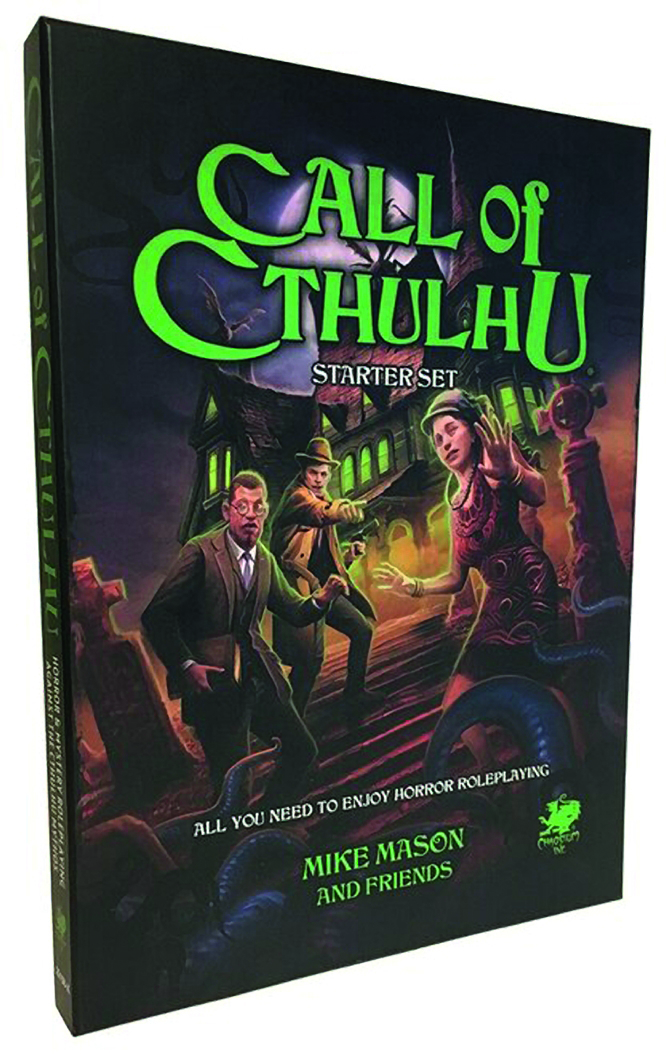 A classic RPG and grandaddy of all mystery games, Call of Cthulhu is designed to appeal to players who want to explore the edges of human knowledge and don’t mind if their character gets eaten in the process.

One of the most comprehensively thought-out starter sets on the market, this slim little box gives you a great way to experience the horrors of the game no mater how many players you have access to. The solo adventure, Along Against the Flames, serves as a solid tutorial and can even help players to generate their very first character as they play.

The rules can sometimes be a little bit fiddly, but Call of Cthulhu fans have always maintained that the game’s true strength lies in its scenarios and the starter set seems determined to prove this point. There is a heck of a lot of content on display here, with three separate mysteries that can comfortably occupy a night
of gaming.

One of the most appealing things about the set is its price point. Despite what the RRP might say, it’s pretty easy to pick up a copy of the Call of Cthulhu Starter Set for less than £20. That’s an absolute bargain for even a few nights of mystery and madness.