The Iconic Oink: Meet the distinctive Japanese maker of Deep Sea Adventure and A Fake Artist Goes to New York that proves small can be mighty Good things come in small packages, runs the old adage, and it’s one that games companies have only recently started to take to heart. After decades of box-inflation, designers and manufacturers are realising that smaller boxes means players can fit more games on their crowded shelves, warehousing and shipping is easier, and a reduced size doesn’t have to mean a reduction in gameplay.

The standard-bearer for the movement towards the new small has been Japan. Seiji Kanai, the creator of Love Letter, may have been the first to get attention in the West but it’s been Oink that has become the maestro of the form, with its uniform and insanely portable 11x6.5x3.5 boxes in striking colours, its distinctive graphic design and its clever melding of theme, mechanics and components into delightful packages of fun with an almost universal appeal.

Jun Sasaki is the company’s CEO, lead game designer and also, as a former full-time graphic designer and animator, responsible for the elegant, minimalist presentation of the company’s games. The Japanese arm of Oink now has a dozen employees – it’s one of the larger games companies in the country, though many of them work for the sibling company that creates games for mobile devices – plus a few more at its European office in Germany that opened in 2016. But when you talk with Sasaki there’s a real sense that he is Oink, and that everything the company does takes its lead from his taste, his instinct for design and his understanding of what will work and what won’t.

In person Sasaki is charming, around average height for a Japanese man and with thick dark hair. Although still based in Japan, he’s a regular at European games events like Essen Spiel and UK Games Expo. His English isn’t strong (though better than my Japanese) so the translating is done by Laura Grundmann, who runs the German office. 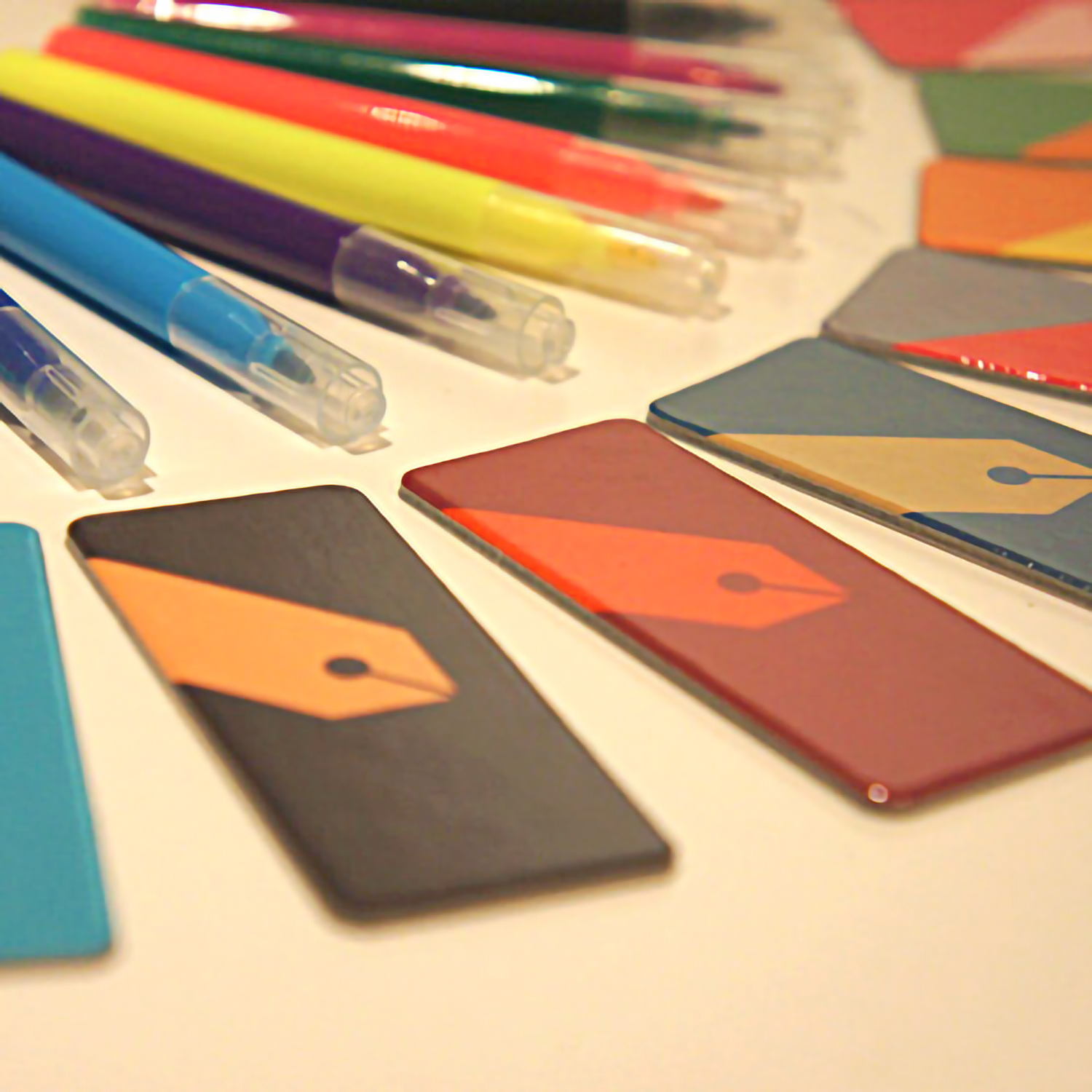 Fake it ‘til you make it

Most players in the West know Oink for one of two games: Deep Sea Adventure and A Fake Artist Goes to New York. Fake Artist was actually the company’s third release, in 2011, after Stray Thieves (no longer available) and In a Grove, which Sasaki says is his favourite of all Oink’s releases. It’s less well-known outside Japan but (he explains via Grundmann) it was the game where he felt all the elements came together the most successfully, from the game system and graphic design to the physical pieces. It’s a game of solving an almost abstract murder-mystery through bluff and maths – the murderer is the suspect with the highest number, except under some circumstances it’s the lowest.

Fake Artist was the first game idea that Sasaki had, but took a while to come to market. It’s a combination of the spot-the-interloper gameplay of Spyfall, which actually came out two years later, with a unique system of collaborative drawing. One player is the question master, and uses the tiny slates in the game to give each player a subject for a drawing, except for one who is only informed that they’re the fake artist. On their turn each player must add a single line to the co-created drawing, being careful to draw enough to indicate to the other artists that they know what the subject is, but not enough to let the fake artist work it out – or, if you’re the fake artist, just draw something that seems to match what everyone else has done. Since each artist has their own coloured pen to match the colour of their slate, you can tell immediately who drew which line.

It’s riotous fun for up to ten players – which means that the tiny box contains ten slates, ten pens, a wiper and a pad of paper for drawing on. It’s a triumph of imaginative gameplay and box-planning logistics, a party game that will fit in your pocket.

These two titles set the tone for Oink’s future releases: accessible, intelligent design, with instructions on a single folded sheet of paper – though sometimes in eye-crampingly small type – and interesting, emergent gameplay. The box size was quickly standardised, each with a different colour, making Oink games a distinctive presence on shelves – something that Sasaki says was mostly about his personal taste, like the box size, though he’s gratified that many collectors want to acquire the complete set.

The company has done a few titles in larger boxes, notably last year’s Moneybags, a game of acquiring wealth and bluffing, which includes 67 metal coins and six heavy hessian-type bags in a double-size box. Then there’s the beautiful but tragically German-only edition of the Reiner Knizia auction classic Modern Art, with cards featuring real art from five big-name artists and a wooden easel to put them on. The box is still only twice the size of a regular Oink title, but it contains beauty.

When asked why, Sasaki beams. He’s a big fan of Knizia’s work and Modern Art is one of his favourite games of all time, he explains. He owns eight different versions of it already, and he wanted to create the perfect edition of it. It was actually Oink’s second stab at the title: back in 2011 they’d produced a stamps-themed version – appropriately called Stamps – in an atypical long, thin box, which now fetches hundreds of dollars when it crops up on eBay. 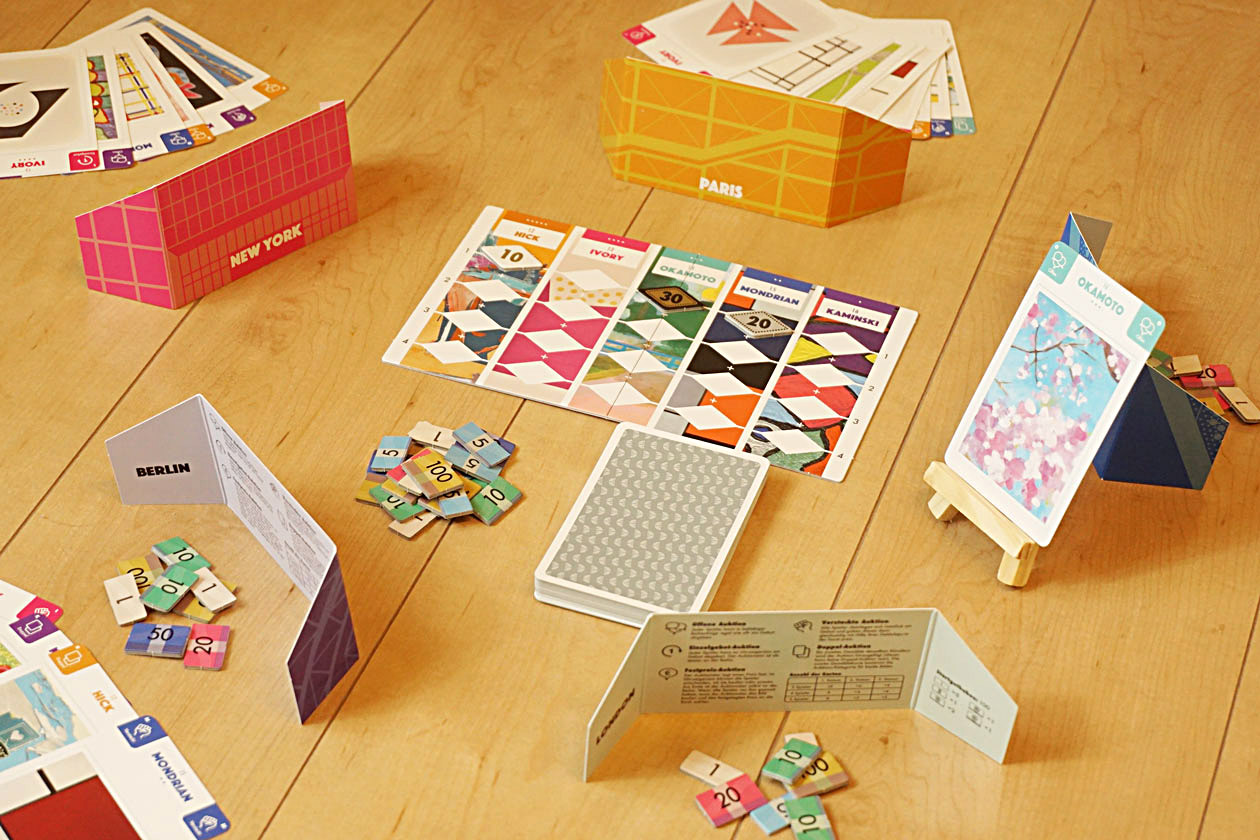 Part of what makes Oink games so desirable is the sense that each one has been refined and polished over and over like a lacquered cabinet. That, Sasaki says, is something of an illusion. He can take a game from first concept to finished production artwork in a month – often the month leading up to Game Market, the big tabletop games show held in Tokyo in spring and autumn each year. If he has a prototype that isn’t working after two or three tries, he’ll discard it and work on something else instead. This is the kind of information that makes rival designers swear and tear their hair.

As the company has expanded its output (Oink released six titles in 2018) Sasaki has naturally had to step back from creating the company’s entire output, and Oink has published titles by other designers. Some have been existing games given a makeover for the Japanese market, like the gloriously titled Dungeon of Mandom VIII – which European gamers will recognise as Antoine Bausa’s Welcome to the Dungeon with a JRPG re-theme. Others include Nine Tiles, a 2015 release created by Luxemburg designer Jean-Claude Pellin, a fast-paced pattern-arranger that did well enough to deserve a sequel, Nine Tiles Panic, that has become Oink’s most recent bestseller.

Then there’s Deep Sea Adventure, which is all Sasaki. The little 2014 game that could, with its delightful diver meeples, its Beatles-inspired submarine and its deeply silly backstory of cheapskate treasure-seekers diving for sunken gold but all using the same air supply to save money, has become a modern classic. The gameplay is semi-co-op, requiring working together to not use up too much air before you get back to the sub – but someone always does, dooming you all. It’s the economics principle of the tragedy of the commons (how resources that belong to everyone are open to abuse by individuals) writ small and elegant, with clever mechanics and easily-grasped gameplay.

Oink’s future looks bright and exciting. It’s not all rosy – the small size of the games has made them an easy target for counterfeiters, so beware of cheap online copies as they’re probably not kosher. It’s hard to tell if they don’t announce new titles far in advance because they’re playing their cards close to their chest, or because they genuinely don’t know – perhaps waiting for one of Sasaki’s flashes of inspiration. Whichever it is, the distinctive Oink boxes will be a fixture in game shops and at games gatherings for a long time to come.

This review originally appeared in the November 2019 issue of Tabletop Gaming. Pick up the latest issue in print or digital here or subscribe to make sure you never miss another issue.