That Time You Killed Me with Designer Peter Hayward Time travel is a difficult concept to get your head around, on the other hand, it solves many of the problems that murdering someone throws up. Additionally, the best way to get hold of a time machine is to find someone that’s already made one, and then go back and off them.

Peter Hayward is the designer of That Time You Killed Me a game of temporal murder, and probably regretting the choices you’re going to make. He runs Jellybean Games, as well as the game design podcast Fun Problems. Today, or indeed, any other time you’d like to travel to at the time of writing, he’s here to talk to us about the art of creating a time travel game. 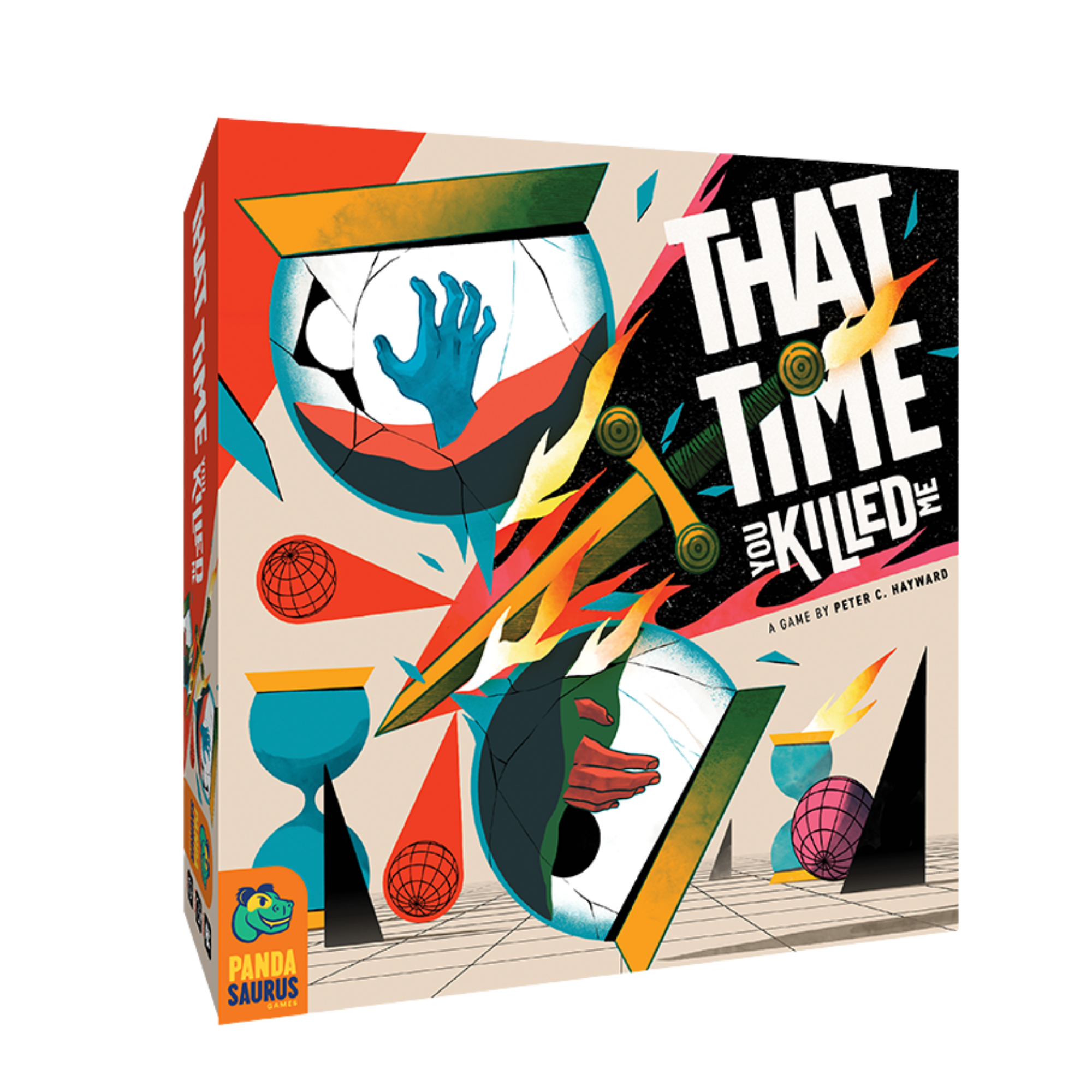 What is That Time You Killed Me?

Peter Hayward: That Time You Killed Me is an abstract game for two players. It’s a campaign game of time travel, betrayal, murder, and [redacted], in which you [redacted] to avoid your opponent from [redacted] so you can [redacted] their [redacted].

It features a host of interesting (and flavourful) interactions and a whole bunch of unlockable content. A lot of playtesters described it as the most thematic abstract game they’d ever played and the most “time travel”-y game they’d seen.

What was the inspiration for the game?

PH: Allen Pan posted a video at the end of 2018, ‘How to Play 4D Chess’ [a video where Pan attempts to make a 4D chess board with a physicist]. I had it on in the background while I was cleaning my office, and as they struggled through the majorly complex game they’d invented, I found myself thinking ‘hang on, there’s a simpler way of doing this.’

I started sketching ideas, and within ten minutes I had a rudimentary version of the game which became That Time You Killed Me. After a few months of playtesting it at conventions and with my Toronto group, I’d refined it into the game Pandasaurus fell in love with.

How does this version of time travel work?

PH: I wanted to make sure this game was as accurate as possible, so I actually built a working time travel device as research. It was a lot of work, but worthwhile. I destroyed it as soon as the game was done, just so that no one else could go back in time and create That Time You Killed Me before I did.

Rather than go into the specifics, I’ll describe the game’s time travel rules in
terms of pop culture films. It’s two parts Austin Powers, one part Looper, with just a dash of The Terminator and Bill & Ted’s Excellent Adventure.

How do we do the deed? The game looks very abstract – can you explain how the three boards work? Does time ‘ripple’?

PH: Each of the three boards represent the same plot of land in three different eras. One is that space in the past, one is the same space in the present, and the last is that same space in the future. On your turn, you’ll choose a piece in your current era to take two actions with, and then choose next turn’s era. Fun fact: when I started working on the game, I referred to them as “areas” and “eras”. That got confusing quickly.

The strategy of the game comes from positioning – you can push your opponent’s pieces into walls to crush them, timing – if you travel to another era and take your next turn there, you can snowball moves into a huge material advantage, and not putting too many of your pieces on the board at once; if you ever get pushed into a copy of yourself, it causes a paradox and both pieces are destroyed.

The player who eliminates their opponent from any two of the three eras wins each game.

Can you tell us a bit about the narrative of the game, maybe in the wrong order?

PH: Pandasaurus are being very strict about spoilers – they’re keeping my most prized possession in a safe until the game is released – so all I can tell you is that each chapter adds a new element to the game, and one of them features elephants.

But I can tell you how an abstract game turned into a campaign: the original prototype included all of the different modules in the game right from the start, and it was just incredibly overwhelming. By splitting them up and introducing them one by one, players get the chance to enjoy each of the different cool additions to the game’s core rules.

Tell us a little about the art direction (if you can) – it’s pretty wild!

PH: If you spend some time on Jor Ros’s website, you’ll see that he specializes in wild and wonderful art. The game is this weird mix of robust mechanics and whimsical storytelling, and I think Jor’s work does an amazing job of melding those tones.

For the most part, I was fairly hands-off. My only requests were that a blue beard was hidden somewhere in the art (as has been the case for each of my games) and that the elephants were wearing hats. Although that last one was more for mechanical reasons than artistic ones...

I also have to give a special call-out to Stevo Torres, who is responsible for the graphic design for the game. He poured everything he had into this game, and it shows; every card, every piece, every element is just exquisitely assembled. It helps that he was a fan of the game, even before I signed it. I’m so impressed by what he (and the whole Pandasaurus team) have put together.

If you could go back in time, what would you attempt to change? (If anything!)

PH: Once you become a parent, this question has a hard cut-off date; every moment before the conception of my son is now off-limits.

So with that in mind, I think my best bet would be to fly to Wuhan, China at the start of 2019 and just wave my arms around a lot, trying to take advantage of the butterfly effect.

Worst-case scenario, I have a lovely vacation and give the locals a story about a blue-bearded man who spent two weeks straight standing in the market and flapping his arms like wings.

What’s next for you?

PH: These things tend to come in pairs; I happened to come up with my best two designs within just a few weeks of each other: That Time You Killed Me and one of my heaviest designs, a worker placement game called Robotopia. That’ll also be coming out shortly; it’s hitting Kickstarter on the second of November, from Coffeebean Games.

In Robotopia, you play as a guild of robots, trying to overthrow the city-factory’s Master Robot, who rules with an iron fist – literally. There’s no time travel, but Robotopia features the same kinds of clever, tricky plays as That Time You Killed Me – and has a similarly light tone and gorgeous art.

This feature came from Tabletop Gaming Magazine, which is home to all of the latest and greatest tabletop goodness. Whether you're a board gamer, card gamer, wargamer, RPG player or all of the above, find your copy here.