Remixing Heraldry in the Puzzler that is Blazon Nobles and Knights meet curious tabletop with the game Blazon

Heraldry is a core part of the allure of the smudged time period of the knightly middle ages. Nobles and knights would have a crest that somehow depicts their family, their values, their deeds. It might be added to over the years, or burned from all but the most lost history books when a new king took favour. Or so we imagine anyway. The truth about these ‘fancy shields for knights’ is probably much less romantic.

Blazon, a new game coming to store in autumn this year after funding to the tune of $70,000 on Kickstarter, is a game that dives directly into the fascinating world of making blazons – the real name for the fancy shields mentioned above. Dave Conklin is the first-time games designer behind the project being published by 25th Century Games.

“I’ve been an active gamer since I was young and have always wanted to publish one of my own creations.  I am so excited to get this game into people’s hands. You probably have never heard of me, but hopefully that will change after this game,” says Conklin by way of introducing himself.

Blazon is a card-drafting, tableau building game with a puzzly heart, “what makes it unique is the theme of heraldry.  For those who don’t know, heraldry is an art and science developed during the Middle Ages by which coats of arms are devised, described, and regulated,” explains Conklin, “even in modern times, you see the impact of heraldry everywhere you look. Businesses, municipalities, heads of state, and private citizens can all display a coat of arms.” 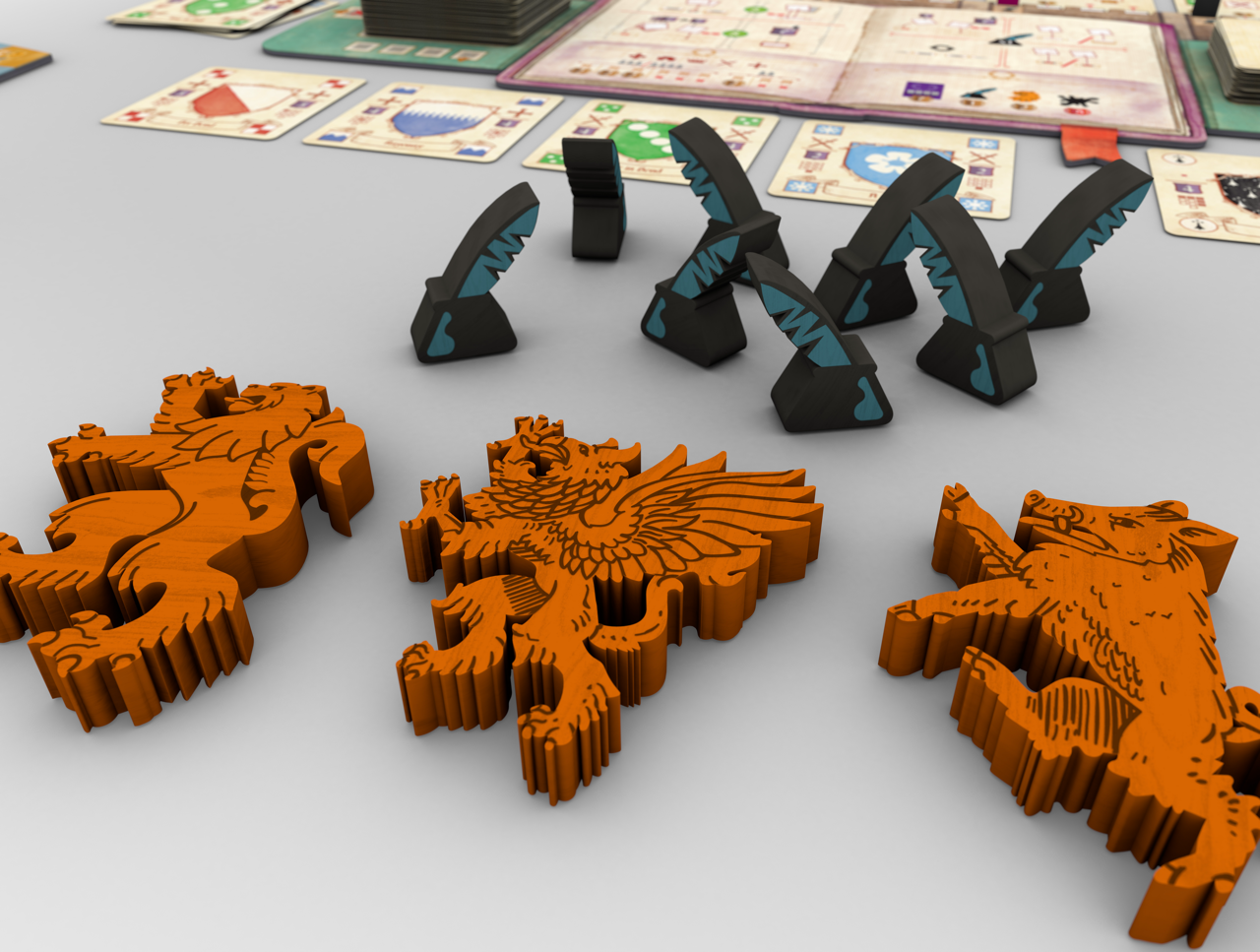 Heraldry is its own language, the designer explains, “most people don’t realize heraldry has its own vocabulary, grammar, and syntax.”

Conklin’s own introduction to the hobby of heraldry was through his children’s homework, “I first discovered it years ago when we did a unit study on Medieval times with our kids. We studied heraldry, armory, chivalry, genealogy, and other related topics. I kept pretty extensive notes and found myself researching and learning more about heraldry over the years until it dawned on me that I could make a game about it.”

“It has been a challenge and a constant give-and-take to find the right balance of being true to the source material while also providing a fun gaming experience,” says the designer. The game has resulted in a light and ultimately charming format that plays with the fundamental building blocks of heraldry.

“The gameplay is very straightforward. Each turn you are either taking an ‘acquire’ action to collect cards or a ‘blazon’ action to place the cards on your shield board,” explains the designer, “what makes it a challenging puzzle are the constraints around card placement and the resulting decisions about what cards to ‘pay to play’. There are many ways to score points by either playing high point cards, claiming public goals, racing to be the first to milestones, or end-game set collection majority bonuses. Throw in some rule breaking actions and catchup mechanisms and you have quite a few fun decisions to make each turn.”

Winning is a matter of scoring the most points for your card placements, “the end game is triggered in a few different ways,” says Conklin, “either someone fills all the spots on their shield, passes 50 points, or claims their final Distinction – which is a ‘public goal’. After that, all other players have one more turn and then final bonus points are tallied. Even though the one person with the most points is the winner, everybody walks away with a unique creation.  So really, everyone wins.”

Most players will, when they get the game to the table, spend the first five minutes just mucking about with the cards, attempting to make a blazon that appeals to them. But how do we do that in the constraints of the game?

“The core thematic idea is that the cards you are placing on your shield board are building a ‘blazon’ which is the verbal description of a coat of arms,” explains Conklin, “each card has its name on the card and when you read the names top-to-bottom, left-to-right, you technically have a legitimate blazon.”

“If you want, this can be drawn – emblazoned – to become an actual visual coat of arms. During the game, you may not be thinking of the aesthetics of your shield since you’re focusing on scoring points, but it is nice to admire your achievement at the end and you may just decide to use it as a starting place for creating your own
personal arms.”

We asked the designer whether anyone was in danger of learning something about heraldry.

“I hope so,” he says, “this has been a labour of love to merge my two favourite hobbies of game design and heraldry. This is not a ‘pasted on’ theme, but instead a quick yet accurate introduction to the discipline. The rulebook has several sidebars with historical context and additional material to explain the terminology. By the end of your first game you’ll have been exposed to a lot of material and will be using words and understanding concepts you wouldn’t have just 45 minutes earlier.

“My hope is that some people who play it will be inspired to investigate further and discover a whole new world on this fascinating topic.”

The lightness of the game places it alongside some downright classics – that appealing space just beyond gateway and family-weight games.

“Some folks have described it as ‘Sagrada with cards’ so if you like tableau builders, I think this will fit in nicely with your collection,” says Conklin, “I would describe it as ‘gateway plus’ as far as its weight, but anyone should be able to understand and enjoy it with a brief walkthrough so it would fit nicely in a casual collection as well.”

Conklin is partial to the ‘gameschooling’ movement, where parents and educators use games as part of the curriculum and daily learning activities, so there’s a natural fit with the historical context of Blazon. With that, we’re already looking forward to history class later this year.