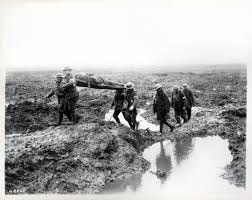 The mud, that awful mud

If war is the ultimate expression of human folly, it’s not surprising that the history of war has seen its fair share of flups and foul-ups, running the gamut from strategic miscalculations, to incompetence at command level to downright farce. In Military Misshaps, we’ll look at the battlefield blunders and conflict-cockups of yesteryear. First up is the Third Battle of Ypres, also known as the Battle of Passchendale, fought in 1917 during World War One.

When people think of World War One, they typically think of a blasted hellscape of trenches, duckboards, mud and shell-craters. Such imagery principally comes from the infamous Battle of Passchendale. Field Marshal Sir Douglas Haig – commander of the British Expeditionary Force during the First World War – had decided to launch an offensive in Flanders in the summer and autumn of 1917. However, he erred gravely in his underestimation of the effects the terrain would have on the proceedings.

Flanders was low-lying, flat terrain prone to waterlogging; originally marshland, it had been converted to arable farmland only by careful agricultural practices and a delicate drainage system. Meteorological analysis had predicted heavy rain during the proposed time of the offensive; Haig not only failed to take this into account, but made the situation a hundred times worse with his decision to shell the German lines with the largest artillery bombardment yet seen in the war. Many sources pointed out that doing so would destroy the drainage system and reduce Flanders to a swamp. Haig ignored this advice and began the barrage on 22 July. The resulting onslaught of artillery reduced no-mans land to a morass of sucking mud, and the ensuing offensive became quite literally bogged down as British and French infantry tried to wade through water-filled shell holes and a sea of sodden earth. One of the most controversial Allied offensives of the First World War, the operation (which lasted until 10 November 1917) caused an estimated 200,000 – 448,614 casualties. Many of these were caused not by bullets or shells but the terrain itself; according to one estimate, men drowned in the deep mud at a rate of 90 a month.