Have you Played? Takenoko We often get seduced by the complexity of a game – the idea that the more moving parts it has, the better it is in some way. This might be because a lot of easier to grasp games at the lighter, gateway, end of our hobby are ‘simple’ in some way. There’s another version of this, something that maybe we’ve all forgotten a little, that there’s sometimes something more engaging than simple, that looks similar – and that thing is ‘elegance’.

And Takenoko is one of the most elegant games out there. Yes, it’s deeply thematic, richly designed and lavished with love in all parts of its production and design, but technically it’s just a game that you can’t help but fall a little bit in love with. Much like the megafauna that stands as a kind of mascot for the game, it’s deeply charismatic.

Designed by Antoine Bauza (Hanabi, 7 Wonders, Ghost Stories) the game sees you play as a set of gardeners in the Japanese emperor’s garden, caring for the giant panda that lives there. This panda was gifted to the Japanese emperor by the Chinese emperor as a symbol of peace between the two nations, so international diplomacy is in your hands… or not, there’s no way to dress Takenoko up as anything more than the best game about making sure a cute panda gets fed.

The closest thing we get to disruptive play is the weather dice. These are rolled at the start of each turn giving that player a bonus. These could be things like taking the same action twice, moving the panda somewhere arbitrary, or additional actions. It’s a good little bit of randomness that doesn’t hurt the balance of the game, but does provide an additional strategic option each turn.

Each player takes turns taking two actions of a possible five. These are laying a new octagonal tile, irrigation, taking a new goal card, moving the gardener to grow more bamboo, or moving the panda towards a light bamboo-based snack.

Each of these actions changes the board slightly. It’s one of those games where the shared board that you build together with other players, which is in equal parts innocently pleasant, and an action ripe for smart tactical moves. You could, each time you play down a new tile, irrigate a new area, or plant some bamboo, be playing into your opponents’ hands.

All of these actions are in aid of points for completing cards. There’s panda, gardener, and land cards, each of which presents a challenge like ‘create a section of garden tiles in this configuration’ or ‘get three green bamboo blocks (by eating them)’ or ‘grow a pink bamboo to a height of four without using a panda deterrent’. The latter there, more complex, is worth more points. Once you have the requisite shape, resource, or feature on the board, you complete the card to add to your score at the end of the game.

So, you take your actions of laying new tiles, that if irrigated, sprout new bamboo, moving the gardener who might grow more, or moving the panda, who might eat it. There’s little bonuses to add to your tiles too that increase the growth of bamboo or protect it from a peckish panda. Once you have nine cards completed and collected, everyone else gets one more turn and the scores are totted up.

That’s it. That’s all we have to worry about. Simple right? Yes. And very elegant to play. 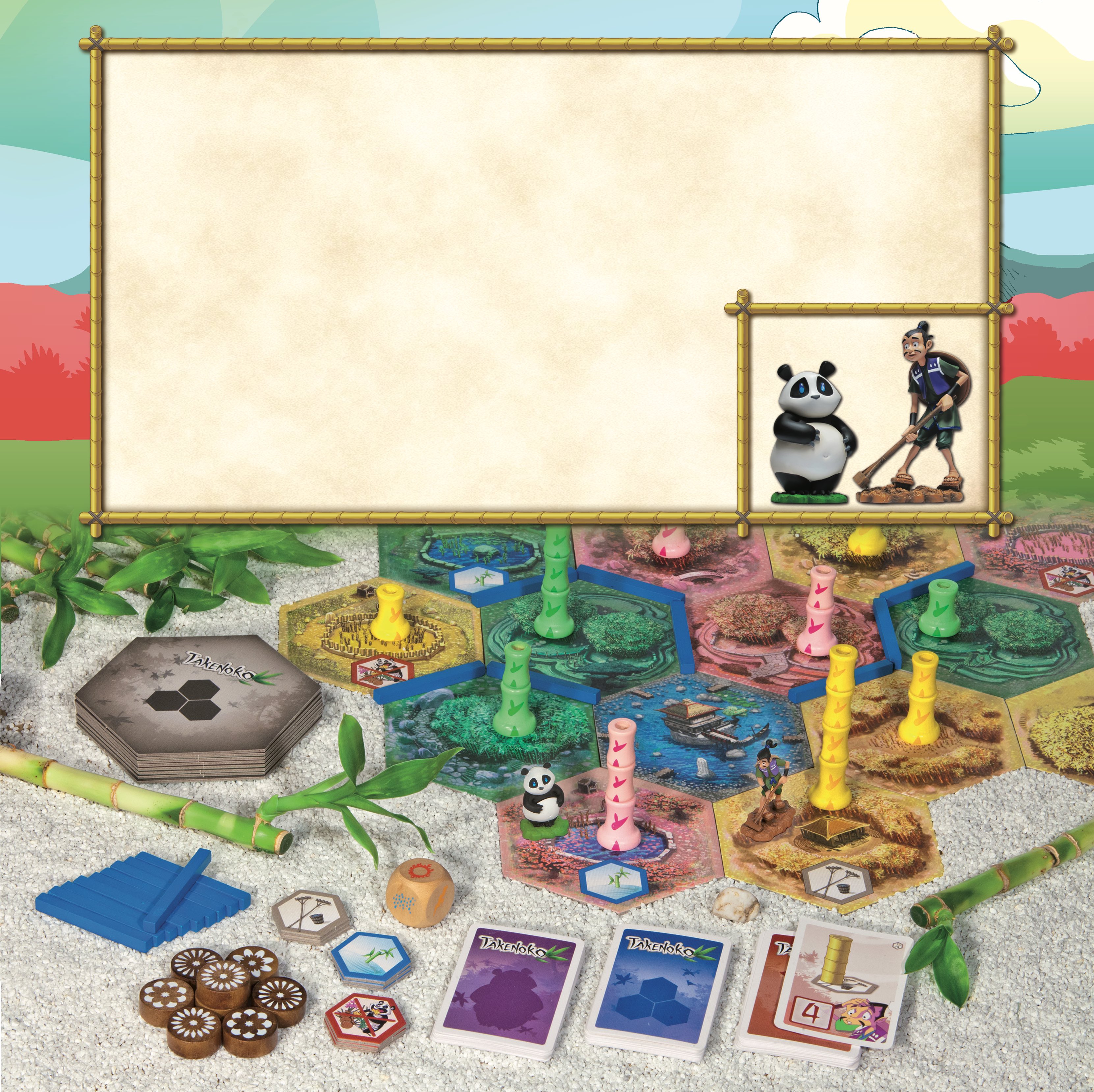 Games that are easy to learn, and indeed, that you’ll probably never forget how to play after the first time, offer huge scope for tactical play. Takenoko is one of those games, like Carcassonne, which offers more depth than should be available in a handful of actions.

Your cards are secret, and you can always pick up more, but how you play the game will give away the kind of goals you’re working towards. And once you’ve played a few times, you can read the game quite easily. Players will manoeuvre the panda (which travels in straight lines, as everything does in the game) toward the snacks they’ve built up elsewhere on the map, or may be building up particular tile configurations. With this, you know that by laying a tile here, or lining a panda up over there, you’ll probably be giving other players a slightly harder time.

And it’s elegant because, as the theme goes – and the way the board works collaboratively – players don’t feel like they’re in direct competition. In the same as some of our favourite co-op games challenge us against the machinery of the game, players feel like they’re fighting against the ecosystem of the board itself, rather than one another. A little like the way the weather dice here add randomness to contend with, other players are changing the board to present you with a new challenge every turn. Which, along with everything else, means there is nearly zero downtime – as you need to be paying attention to the speedy turns taking place around you. It’s the board that you’re playing against, and everyone else is just adding to it in some small way with each action.

But it remains a relaxed game that lets newer players just play their own way. There’s still a chance they could win by getting the right card in hand to finish someone else’s bamboo project, and a fortunate roll of the weather dice can give a player a slight edge on their turn to simply get more done.

Returning to Takenoko was like a refreshing bamboo smoothie, a palate cleanser that reminded us that games can offer depth without burning your brain. The measure of a game isn’t dependent on the number of moving parts, but more to do with the depth of play that happens between the players. And that’s where Takenoko succeeds.

If it’s been a while since you took this gentle giant of a game out for a walk, now’s the time. 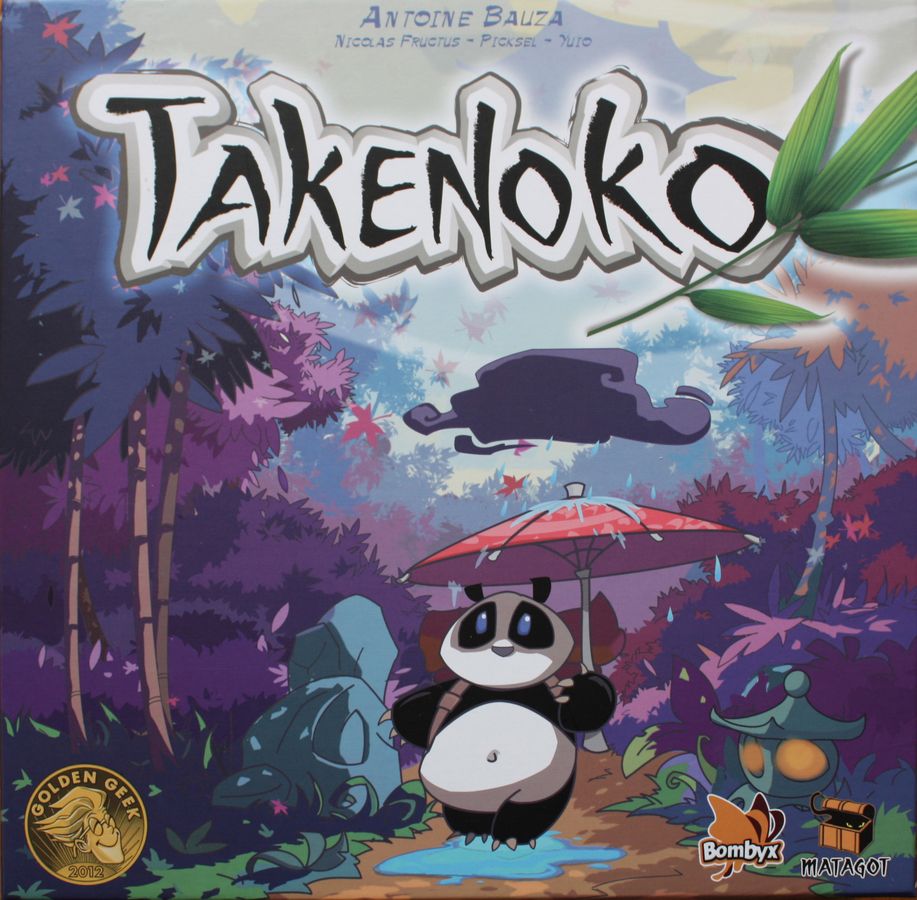 If you enjoyed this, you can also check out the original review of Takenoko by Tabletop Gaming, way back in the very first issue!

Check that out by clicking here.