Have You Played? Oh My Goods Become the master of the medieval supply chain

This article originally appeared in issue 58 of Tabletop Gaming, and was written by Christopher John Eggett. Pick up the latest issue of the UK's fastest-growing gaming magazine in print or digital here.

Oh My Goods! might be nearly perfectly formed. You have probably noticed it creep into various parts of the magazine over the last few months. Since our first real experience of the system in the much heavier, campaign orientated Expedition to Newdale, the core system which drives that game and this original outing by the great Alexander Pfister, has wormed its way into our brains and has no intention of leaving.

A game about generating resources by creating a tableau of workshops, it all sounds so mundanely Euro. But there’s a secret at the heart of Oh My Goods! which is its slight brain bending central mechanic. Everything in the game is done with the single deck of cards, from building your economy, to running your workshops, to paying for buildings, to tracking goods, and in that it might be one of the most ‘complete’ games we’ve ever played. 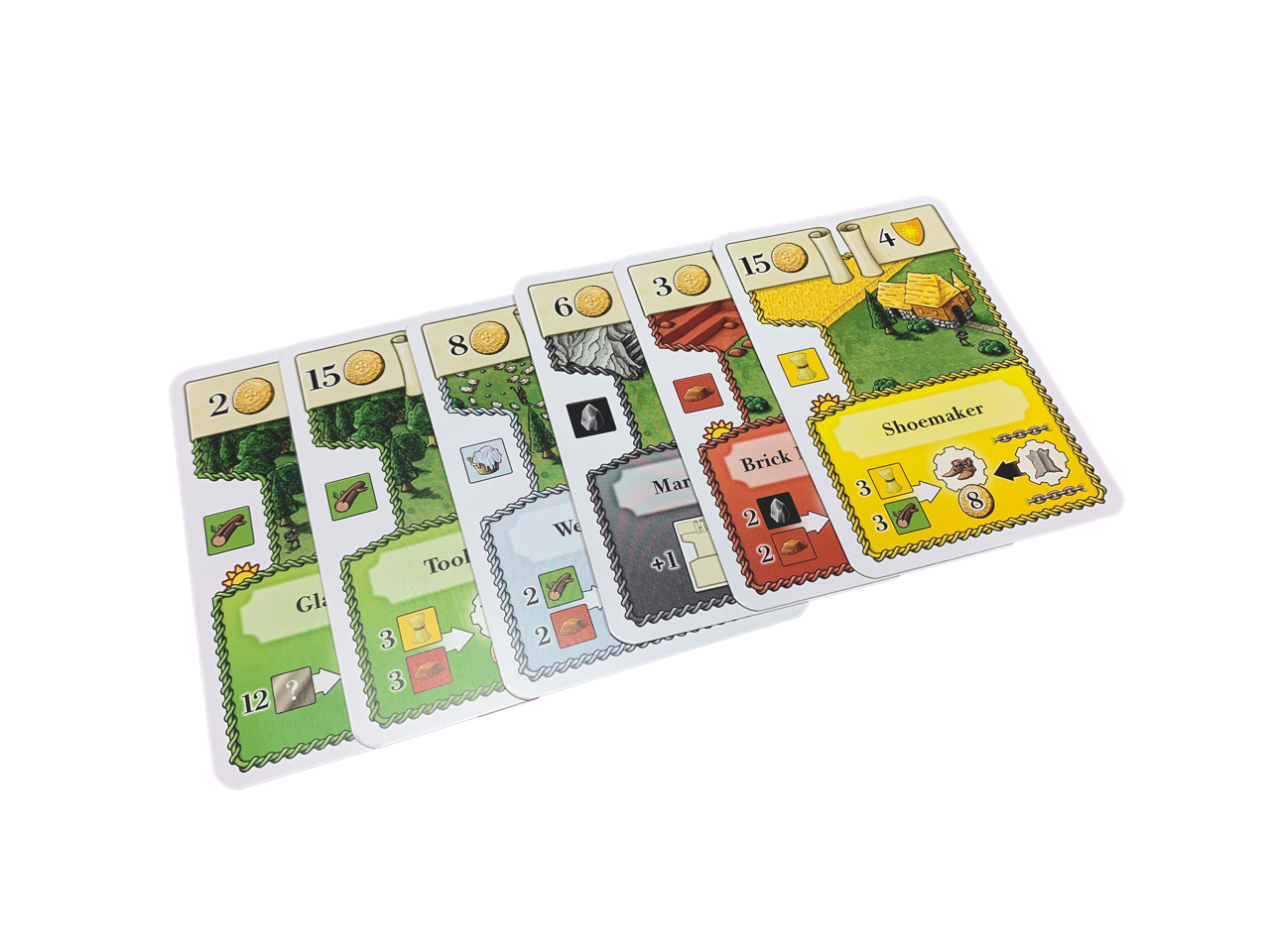 You’re running a medieval economy, and you’d like to be the richest one around the table at the end of the game. You’re going to start off with a charburner, that requires simple combinations of resources to run each turn (each players’ is different) – it produces coal, which is worth one gold, which isn’t very much. Don’t worry though, you have help. Your assistant can either work that building efficiently, or sloppily – the first requires everything requested of the building, and the second requires one less of whatever is needed to run it.

The resources you use to run it are first played out in a river in the middle of the table (until two half suns appear), whatever is on these market cards can be used for free by you and your assistant to run the buildings. At this point you make your choice about how you’re going to run any buildings you’ve built, and also commit anything from your hand to being built later by placing it face down.

Then there’s the second part of the river, which again is drawn until there are two half suns. At this point you either have enough to run your workshops as intended, or not. If you’ve got resources in your hand that match, you can use them by discarding them, to pay for the workshop to run as you planned.

Assuming you’ve got the workshop up and running, you get to draw two cards off the top of the deck and place them face down and across the building that just produced goods. In the case of the charburner that’s two bits of coal, worth one gold each – and in the case of the bakery that bread worth four gold. Then you get to run the ‘chain’ for that building, which means you can move anything it needs to it, from your hand or other buildings. In the case of the bakery, that means you can move a coal from your charburner, and flour from your mill to the card, turning those one and two cost resources into two resources that are now worth four gold.

That’s right, you’ve just added value by running that chain, and turned a card representing a resource from being worth one, to being worth four. And that feels a little bit like magic.

Then you get to build your new building, which means flipping the card and paying for it by discarding goods worth that amount. So you can pay for an eight cost building with two of the cards you just moved to the bakery. And then you do it all again until someone has seven buildings, and tot up the points from buildings, assistants, and one point for every five gold.

WHY SHOULD I PLAY IT?

The brain melty bit is also the bit that’s really pleasingly magic about the whole experience. Players are going to cycle through that shared deck multiple times, because the river gets discarded, as do any cards used to pay for building buildings. There are a number of cards ‘out of action’ for a time in the game, and that is those cards placed faced down on the buildings which represent the goods that each one of those holds. By producing goods, you’re influencing what kind of good will be available in the market, and what will be available to draw each turn. This is in a totally blind way, but it’s all part of the joy of it.

Players can spend their time building up an engine each turn, taking risks and hoping that the right cards are going to turn up in the second part of the market, or playing sloppily but safely. On top of that, there’s Market Office’ cards, which power up your playstyle, but can’t be run like normal buildings. These cards can provide one resource to you alone, as if it were available from the market, or do clever things like improve your draw each turn from two cards to three. These cards are a trade off, but one worth considering, especially if you can get better draw early.

If you can’t, there’s also a refreshing ‘discard your hand’ mechanic which allows players to throw away their entire hand, and draw up to the same number from the deck, dodging the sometimes frustrating staple of games like this where you just don’t have what you need in your hand. 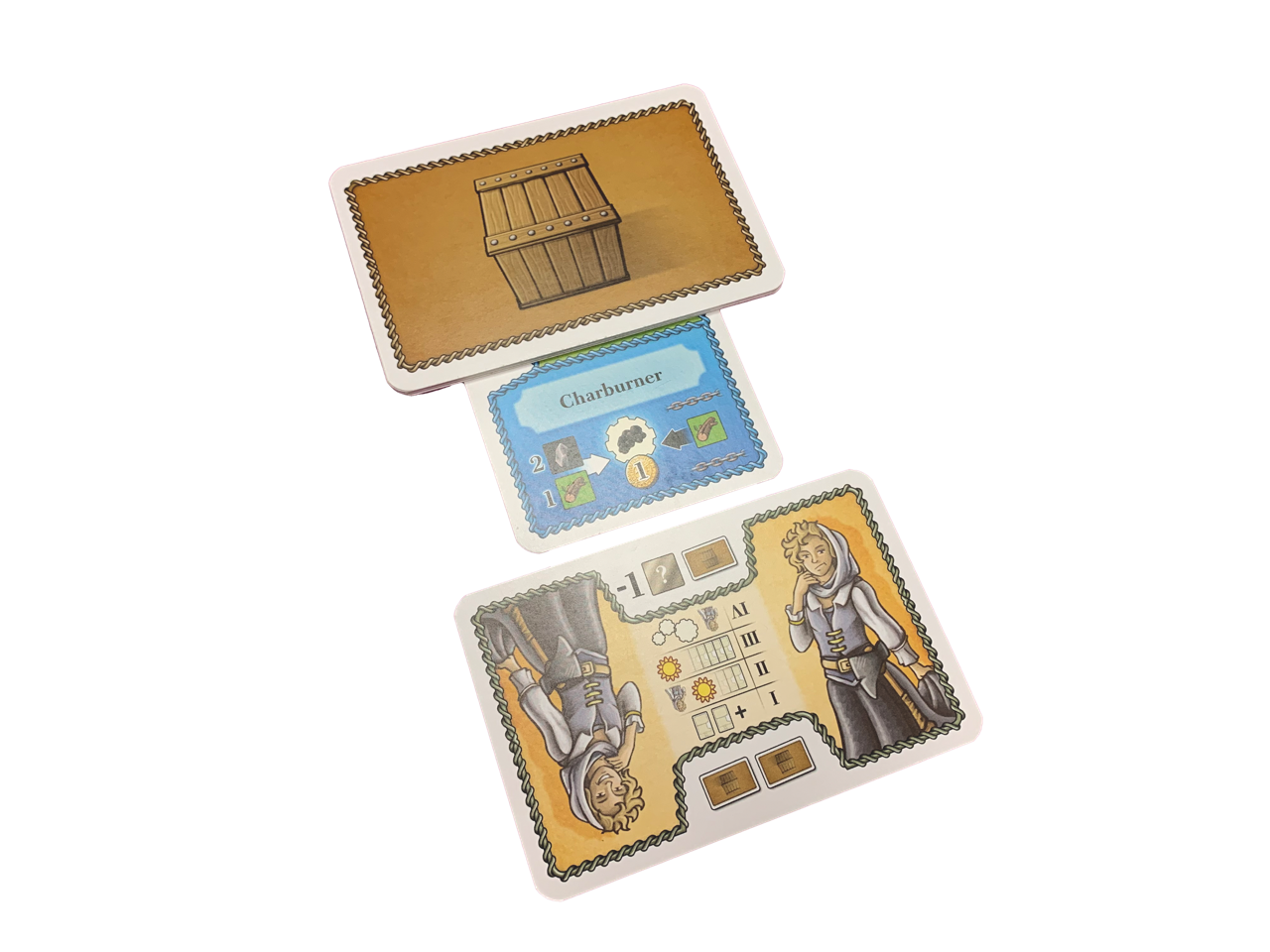 For a game with zero conflict, as you’re never really taking anything from anyone, it is obviously going to play well solo. You can either pick up the official solo mode expansion, or you can use one of the excellent fan-made versions. These add a timer to the game, and offer a point scoring options. Here we get into a pleasurable rhythm of the game, where building up your minor empire of beef, wood, wheat, or otherwise takes on its own creative element. You can fully explore the potential of the various chained set ups of the game, see what machines work best, and hopefully, improve your choices as you go.

It’s a deeply satisfying game, especially right at the end where everyone gets to run all of their buildings’ production chains at once, in any order. You get to see everything chugging along at its final and full capacity, the engine you’ve built running red hot – which is something we can’t always say about an economic Euro.

While we’re quite happy with the base game, there is a world beyond this. And that’s the Longsdale in Revolt, Escape to Canyon Brook and the massively more expansive Expedition to Newdale. Each of these games adds a certain campaign element, with Expedition to Newdale adding multiple boards to play across the story and a number of more standard components (cubes to represent goods, houses for claimed locations). If your hunger for a more expansive version of this game exists, that is your next expedition.

Want to read more like this? Check out other games published by Lookout Games....