Dystopian Wars: An interview with Chris Pond at Warcraft Studios Speaking to the Assistant Studio Manager at Warcraft Studios

From the Badlands of North America to the icy realm of Antarctica, the world of the Dystopian Age is a wild and dangerous place. It is a generation since the end of the Union Civil War and Queen Victoria has been on the throne for over forty years. While Napoleon builds an alliance in Europe, the nations of the Far East are roused to action against the growing threat from the West. Now the greatest scientific minds of the age have unlocked secrets that the human race was unprepared for, as super science and alien technologies bring the world perilously close to annihilation.

Dystopian Wars is a tabletop wargame of naval battles using highly detailed miniatures to represent huge engines of destruction on, above and below the high-seas. Set in an alternate late-Nineteenth Century called the Dystopian Age, super-science fuelled nations clash over resources and power.

Originally the system was pioneered by the now defunct Spartan Games but Warcradle have pushed ahead with a re-launch (pun intended) so Miniature Wargames asked Chris Pond some questions about the system: where they are in 2021 and what kind of Dystopian future do they plan! So: make ready the slip way and read on!

So Chris: Dystopian Wars. Looking first at the background, what makes it a unique setting as opposed to any other – for want of a better term – ‘steampunk’ genre?

Dystopian Wars is just one part of an overarching setting that we call the Dystopian Age. Throughout the rich tapestry of this setting, we can weave stories through many different themes and games. More than ‘steampunk’, more than ‘dieselpunk’, the Dystopian Age is an alternative Earth that has access to incredible energy sources and technologies unframed of in our own history. Incredible machines of destruction with crews of thousands of men and women, wage war against their rivals with weapons that can boil seas and lay waste to cities. 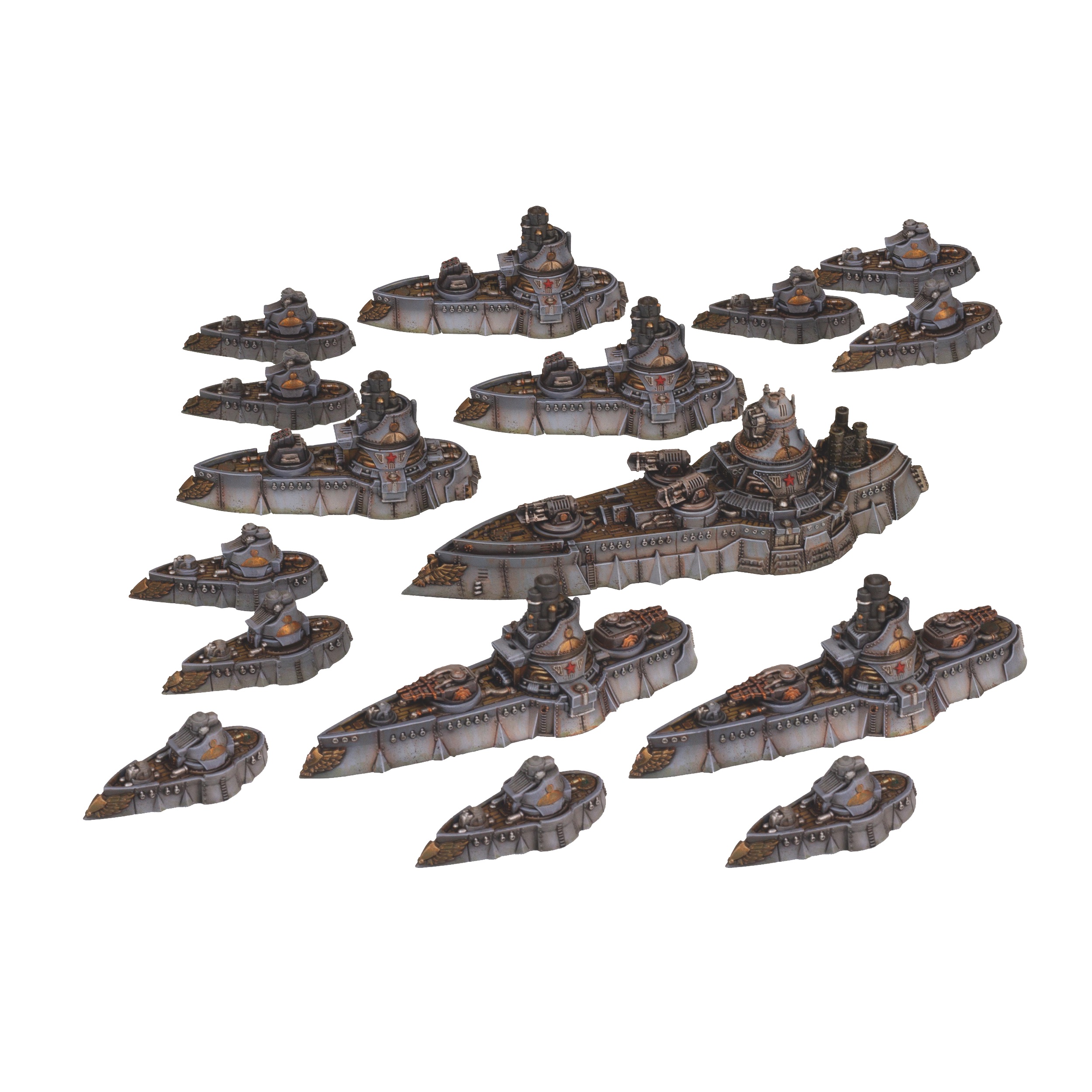 Why did you choose the scale you did and how would you define it. Are you ever going to try a different scale? Maybe larger scale with smaller vessels – as in less ships of the line and more lesser vessels (I’d hesitate to say Motor Torpedo Boats!)

At 1/1200, we think we have a perfect balance for this kind of game: the scale of Dystopian Wars allows us to create highly detailed miniatures while still feeling right on a 4’ x 4’ table. This allows the game to be playable at home and the miniatures of a size and scale to appeal to hobbyists.

The sculpting is very impressive (check out the painting guide in the following article!). I assume it’s all digital and is it just one sculptor or are there a team?

We have a team of talented sculptors coordinated by our Art Director, Roberto Cirillo. It is through him, that we keep the aesthetics of each game and faction consistent. There are a number of collaborative steps and approval processes that each miniature goes through before it is produced, and that makes for top quality models.

How do you arrive at the casting choices for the range? Specifically, why pick resin for some models and styrene plastic for others?

The material used is dictated by the nature of the products we need to release. It is our intention to make as much as practicable for each range in plastic, with key pieces in resin. 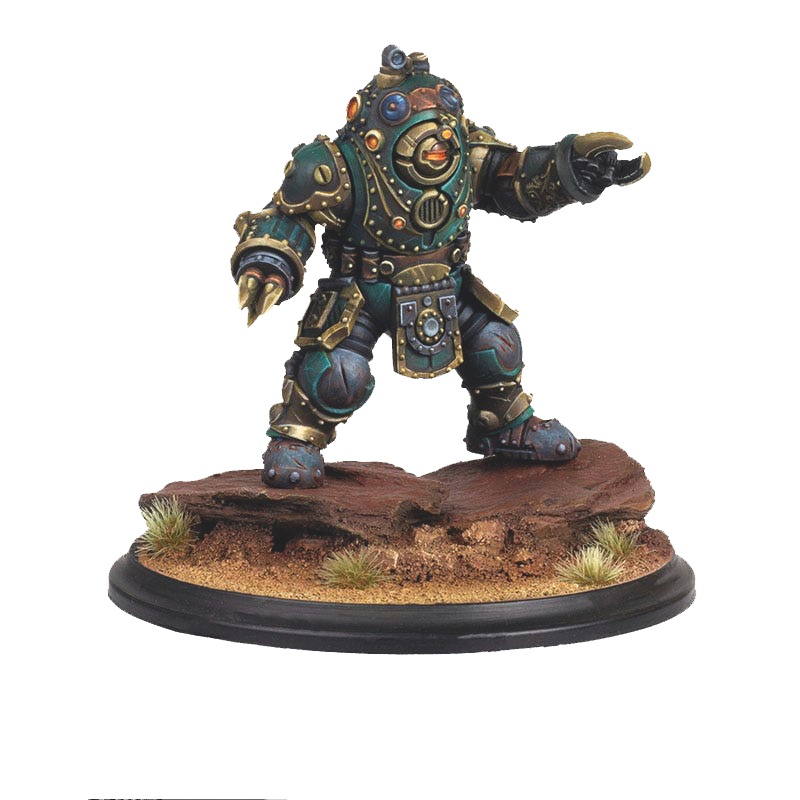 How did the project begin: what made you decide to take it on after Spartan?

It was really a case of being in the right place at the right time. We were on the way to releasing the second edition of Wild West Exodus (WWX) when the opportunity arrived to acquire the Dystopian Wars (DW) property, and create a new exciting setting for both games. While it meant reworking and rewriting a large part of the WWX and DW narrative to bring that game into the Dystopian Age, we’re delighted that it both have become all the better for being part of a larger story.

Will the future bring a closer tie with the Dystopian Wars naval actions and other lines you produce?

Absolutely, along with a range of expansions to Dystopian Wars, the next new game we plan on releasing is Lost World Exodus (LWX). Set in the Dystopian Age, LWX showcases all the factions of Dystopian Wars. This 35mm skirmish game will depict expeditions to the mysterious and transformed jungles of Antarctica.

What about scenics? Would you consider making terrain for games? Islands or harbours, whatever?

Yes we absolutely would, and have done more than just consider it. I’ll say no more about it for now.

I can see that there are a number of new factions on the website. What are you planning for the immediate future release?

There are a few factions yet to have any products released for them. This will be addressed as part of our ongoing release schedule and we hope to have brought several products out for each faction over there next twelve months.

What are your longer term plans with Dystopian Wars?

Skyfortresses, Gyros, Submarines and big stompy robots! Once we have the core range of naval units out we will expand the ranges by diversifying into some different, and very exciting, unit types for each Faction.

Keep up with the latest info at dystopianwars.com

This article originally appeared in issue 460 of Miniature Wargames. You can pick up your issue of the magazine here or subscribe to make sure you never miss another issue.