Crime Ridden, Mob controlled Streets in New Capenna – It Can Only Be Magic: The Gathering Welcome to the city, where cleaning up the streets doesn't seem to be an option.

After the neon-soaked and ultra-violet world of living artefacts in Kamigawa: Neon Dynasty, we are returning to Magic: The Gathering in what feels a little like a bump back down to earth. Most likely this bump is from being roughed up by the local mob in the new set, which takes place on the Streets of New Capenna. The new set takes us away from the lurid cyberpunk art style, and into the world of art-deco crime-chic. And to lead us through these streets, hopefully not to our demise, is Max McCall, the product architect for the upcoming set.

The city, in all of its art-deco glory, functions as a new plane for the game, McCall explains, “Streets of New Capenna introduces players to New Capenna, a new plane in Magic: The Gathering where mob bosses and their families are vying for control of the city and for control of ‘Halo’ the hottest commodity on the streets.”

‘Halo’ is a bit of a McGuffin here – played a little bit like a much-contested ‘drug’ amongst the fantasy crime families of the cities (or indeed, maybe more like Dune’s ‘Spice’) is used for its magic-enhancing abilities. A recent press release on the subject asked stores holding opening nights for the set to get creative with fruit punch and rock candy, while warning the same stores not to use martini glasses to serve them (for obvious family friendliness reasons). Either way, that’s what our demon-noble headed families are fighting over this time.

“Players choose which of the three-colour families they want to join, and each family uses unique mechanics and is led by its own legendary mob boss,” McCall continues.

These three colours are central to the new set – with the return of fan favourite tri-colour land cards. These are land cards that can be tapped for one of the three colours mentioned on the card, a versatile kind of mana generation that allows players to dodge the problems of multi-mana deck types of having all the wrong cards in hand. McCall expects this to have some effect on the ‘meta’, “we work hard to make sure players have the tools to do almost anything, but we’re never confident about what twists and turns the metagame might take,” he says, “if we were, we’d try to shake it up even more. We expect multi-colour decks to get stronger with each family trying to scheme their way to the top of the heap, but there are many strong mono-coloured cards as well – we’re excited to see what players come up with.”

KEEPING IT IN THE FAMILY

Naturally, when introducing factions like this, each has its own character. We asked McCall to introduce us to the main aspects of each crime family.

“First up we have The Obscura – they are wizards and mystics who use distractions, illusions, and hidden mechanisms to orchestrate scenarios to their benefit. Obscura uses the ‘Connive’ mechanic, which provides a way for players to engineer the perfect draws from their deck while powering up their creatures,” explains McCall. Connive allows players to draw into their hand and discard an equal number of cards, while also giving an equal buff to a minion based on the number of creatures discarded. For those who are looking for a way to burn through their decks quicker, this is going to be a great benefit.

“Then there are the Maestros,” says McCall, “who can best be described as old-money vampires who have a taste for the finer things in life and are more than willing to kill to get them. Maestros use the ‘Casualty’ mechanic to sacrifice their creatures in order to power up their spells. Being an underling for a family full of vampires is a tough gig.”

Equally as tough a gig for being sacrificed to power up a spell is the Blitz effect used by the Riveteers, “they’re tough artisans who can break buildings as easily as they break kneecaps,” says McCall, “Riveteers creatures use ‘Blitz’ as a mechanic. When you cast a creature for its Blitz cost, it gains haste, which lets you attack or use its abilities right away. Creatures that were Blitzed out die at the end of the turn, but when they do, you draw a card.”

We also wouldn’t be in a 1920s adjacent fantasy world if we didn’t know how to have a good party, which is where the Cabaretti come in.

“Then we have the Cabaretti, a faction of fun-loving druids who expect loyalty from their followers. The Cabaretti ‘Alliance’ mechanic rewards the Cabaretti for inviting more creatures to the party. Alliance cards give you a boost whenever a creature enters the battlefield under your control,” explains McCall.

“And finally, we have The Brokers; Brokers are demonic lawyers who believe in a doomsday prophecy. They use ‘Shield Counters’, where if a creature with a shield counter on it would be destroyed or dealt damage, players remove a defence counter from it instead. Shield counters are great on smaller creatures trying to sneak in more damage, and on bigger creatures who need to be protected,” says McCall, explaining their particular racket.

All of these new mechanics, tied to the families involved, seems to offer a way of speeding up the core of the game. If there’s a criticism of Magic then it’s that the natural power curve of the game is predictably slow – not so here where it’s likely players will blast through their decks at high speed. Whether this is an intentional change to shake up the competitive scene or otherwise, we’re yet to see, but for those of us who just want to build faster decks, there’s an obvious benefit.

Each of these factions brings a new aspect to the game that should lead to exciting and powerful decks for those who are intro deck construction – and a really simple way to dive in for those who are more interested in just hitting the table fast. 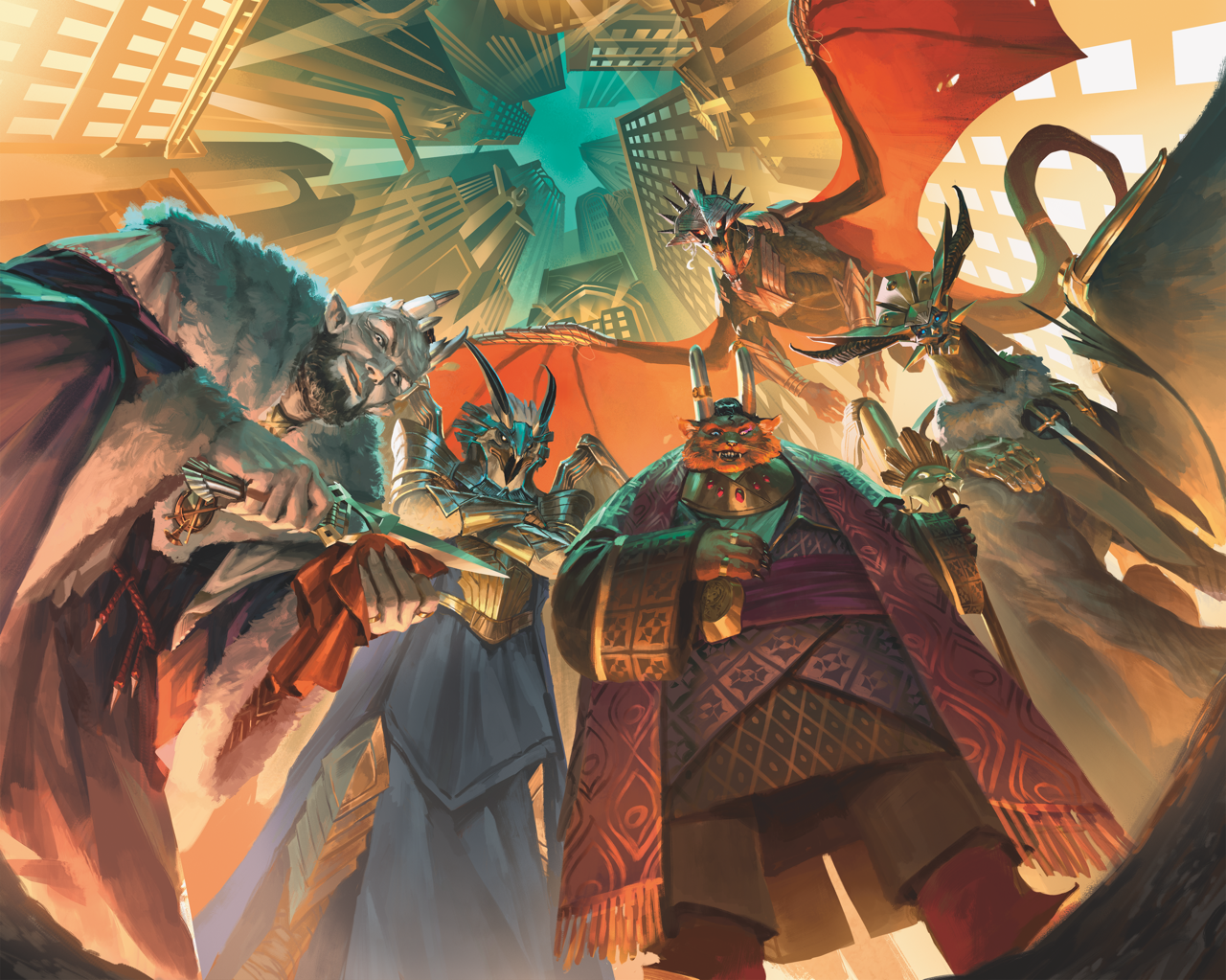 Of course, running a crime family does sometimes lead to the requirement of just getting out of dodge, which sees the return of the Hideaway mechanic.

“In addition to the mechanics that are unique to each family, we’re also bringing back Hideaway,” says McCall, “when the permanent with Hideaway enters the battlefield, players exile one card face down. When they meet a condition that way, players can play it for free.”

Hideaway also allows players to look at cards at the top of their deck, exiling one and putting the rest to the bottom of the deck. While the main benefit is to have a card on hand to pull out when later conditions are met, a way to cycle cards and manipulate the deck in any way is a welcome addition to the game.

For commander players, there’s also a natural fit here “each family is getting their own Commander deck featuring high-up members of each family,” says McCall, “plus, each family has a new land with three land types completing Ikoria’s Triome cycle, which makes everyone’s mana base just a little bit better. And there’s nineteen new legends in Streets of New Capenna to build new Commander decks around.” 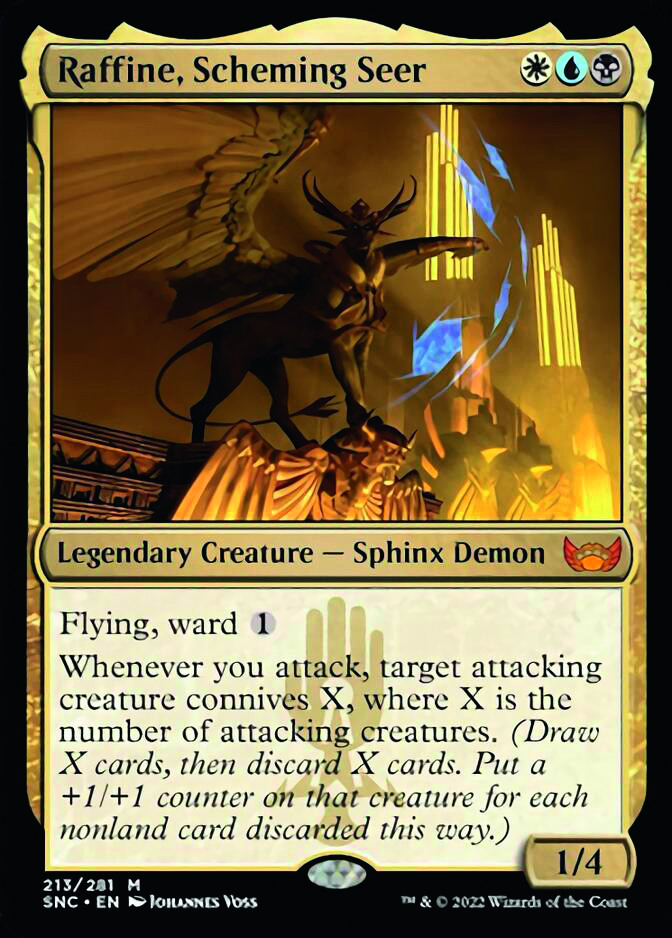 The new legendary cards are where the mechanics of the game shine. For example, Raffine, Scheming Seer allows players to connive X cards equal to the number of attacking creatures – and then buff a creature equal to the number of creatures discarded. This means not only are you burning through your deck quickly, but you’re able to play a wide field of creatures to attacking while giving one of them a huge buff.

Another powerful legendary comes in the (somewhat Vampire: The Masquerade styled) character of Lord Xander, the Collector – the demon leader of The Maestros. While Xander comes with a huge mana cost, the effects provided really are something. With the opponent discarding half of their cards when the card enters the field, half their deck when he attacks, and half of their non-land permanents. These effects could bring the opponent’s game to a screeching halt – if you can get the demon to the field quick enough. After all, if there’s nothing left in the deck, there's not much fun in destroying it.

We asked McCall for his favourite cards from the new set.

“I adore Elspeth Resplendent – I love all three pieces of art she has, and her card is all about the kind of ‘steadily-gaining-value’ style that I like to play,” he answers, “I am also obsessed with all of the Golden Age cards (and especially the Gilded cards, which are just breathtakingly beautiful) but especially Cormela, Glamour Thief who lets me cast Cruel Ultimatum ahead of schedule.”

Cheating out Cruel Ultimatum (a card that forces your opponent to sacrifice a creature, lose life and discard three cards while you do the opposite) might be one thing, but does it stand up to the undeniable affection anyone has for our furry friends? Maybe not, according to McCall for his final pick, “Jinnie Fay, Jetmir’s Second who creates all the goodest boys and girls.”

Streets of New Capenna launches on April 29, meaning you’ve not got long to wait to get your hands on the new cards. Along with the usual products you’d expect for a new Magic: The Gathering set with pre-release packs themed on the families, boosters, and the commander decks will come with a bonus ‘collector booster sample pack’ – a mini version of the premium collector’s boosters.

Beyond that, McCall offers us the next milestone for Magic, “coming up after our Streets of New Capenna release we’re looking forward to releasing Commander Legends: Battle for Baldur’s Gate.”