Words and pictures by Jon Sutherland 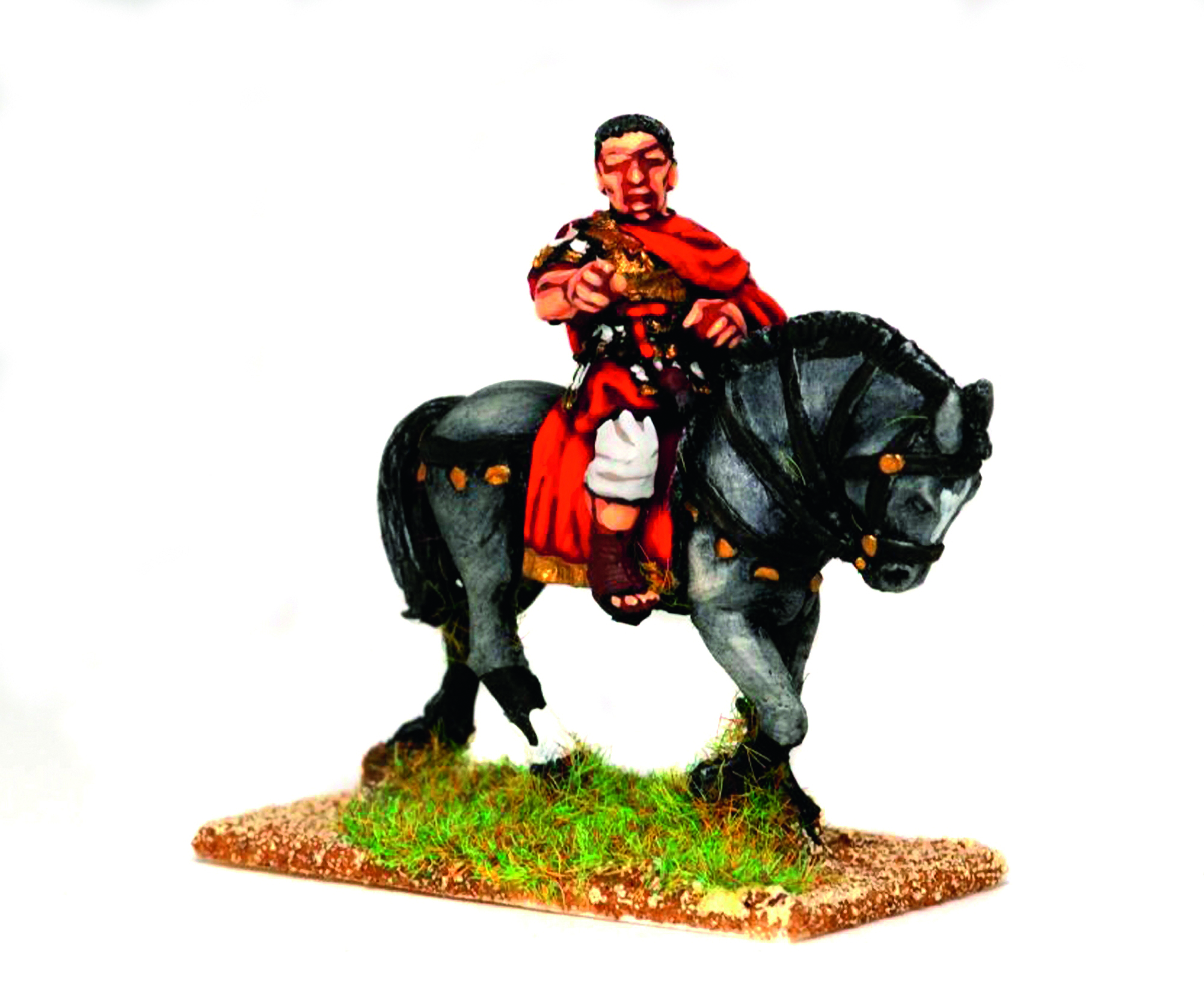 Narbonne straddles the crossroads of the Via Domitia and the Via Aquitania, linking Italy with Spain. In 395, Alaric became leader of the Visigoths, a Germanic people who have migrated towards Spain and Southern France. With the Roman Empire in turmoil and their legions fighting rebels in the west, Franks in the north and Burgundians in the east, the Visigoths, led by Theodoric I, have besieged Narbonne. 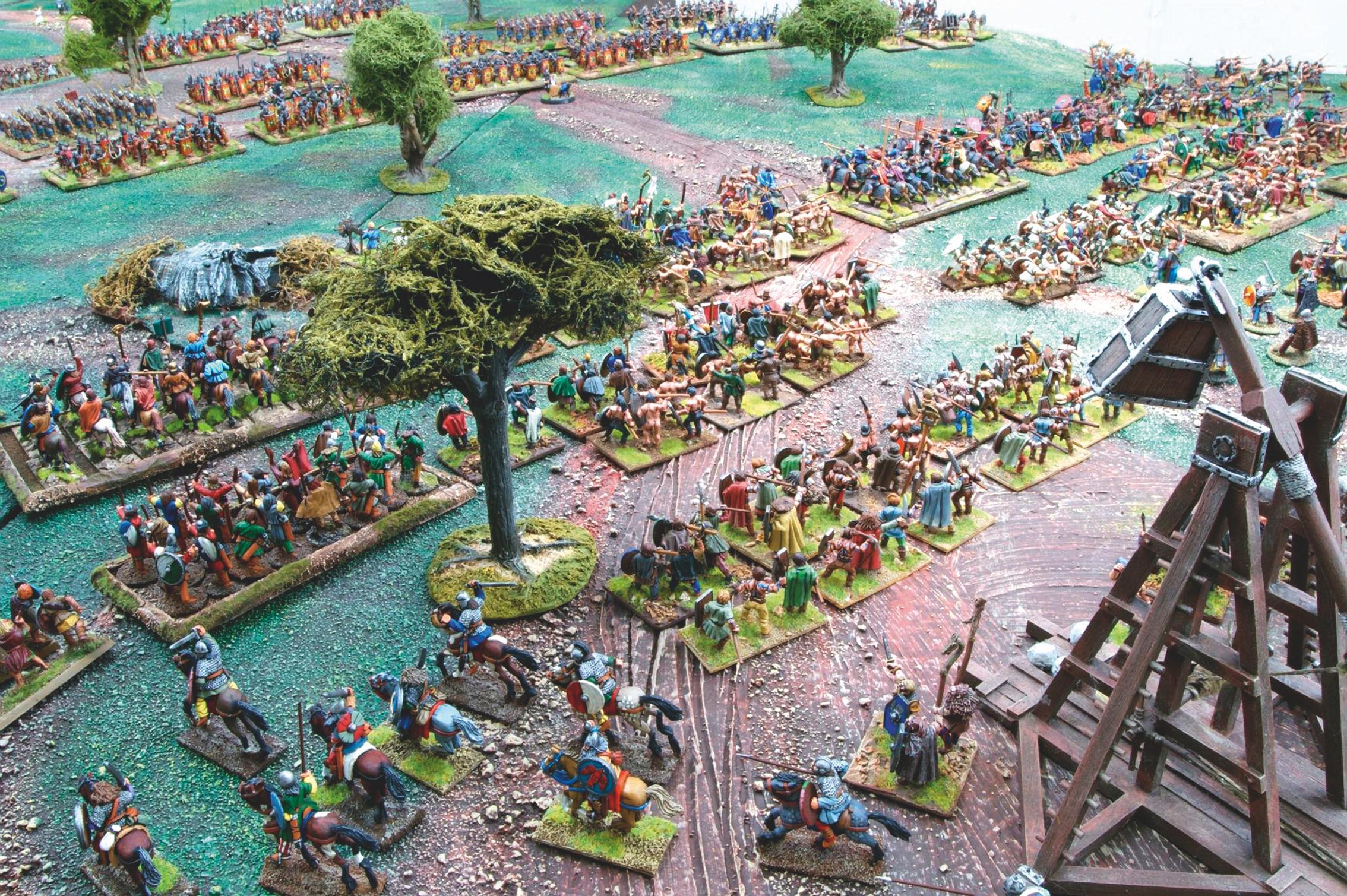 Flavius Aetius, the Commander in Chief of the Roman Army in Gaul has sent you, Litorius Magister militum per Gallias, to raise the siege and punish the Visigoths for their temerity. You favour the old ways and you still perform pagan rites before a battle.

The battle or siege of Narbonne can be fought on a fairly tight battlefield. The city, being a port, is flanked on the southern face by the Mediterranean. Although it is not clear whether this was the case or not, troops and supplies may well have been brought into the city this way. Although given the fact there was starvation during the siege, it is assumed that the Visigoths blockaded the sea route fairly effectively. In our refight we suppose that Litorius has entered the city, reorganised the defenders and then rode out to break the siege.

As you can see from the photographs, the main battle is fought on fairly flat ground, which could be slightly undulating, outside the city walls. The city walls are merely a backdrop and the assumption is that the army under Litorius has deployed into battle lines outside the city and that the Visigoth besiegers have mustered to face them. It is not assumed in the battle that the city itself plays any particular role. If Litorius’s field army is defeated then during the panic the city will also fall. The city is really only on the table for decoration, although it can be used as a rallying point for broken Roman units. 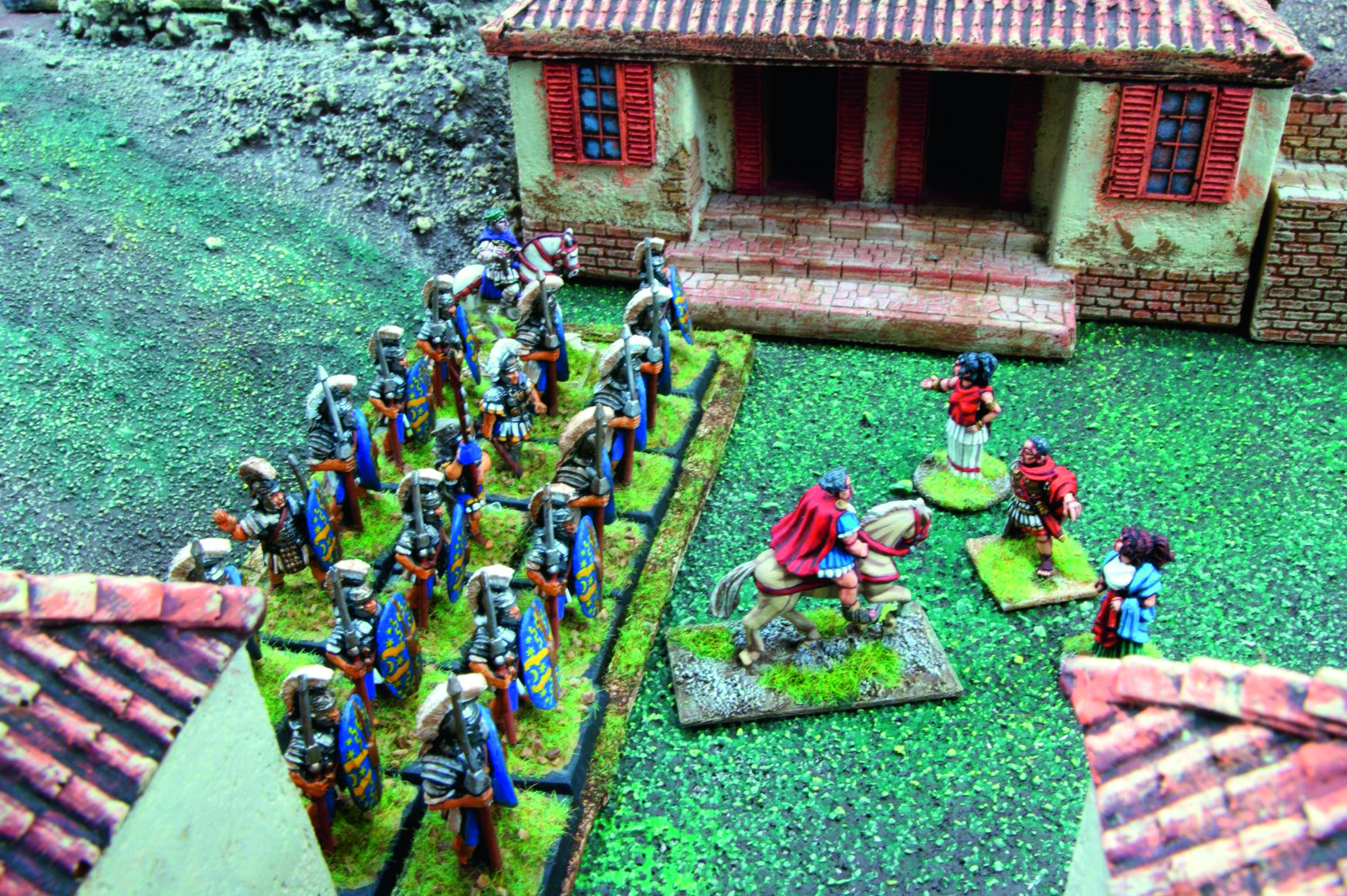 The Visigoths did not have large standing armies. They relied on the use of short term levies of troops. A large majority of them would actually fight on foot and, rather like their Roman opponents they fought with thrusting spears, throwing spears, swords and bows. Unlike the Romans they rarely wore armour. Having fought alongside the Romans, and many of them were probably allied contingents, some of the Visigoths would certainly have been kitted out rather like the Romans of the time.

Visigoths would often rely on their heavy cavalry. A number of the more wealthy men would answer the levy and nobles would be accompanied by their own mounted bodyguards. The deal usually was that they would receive weapons, equipment and a share of any loot, but could not keep loot that they themselves had stolen. The Visigoths made use of feigned retreats, full blown charges, skirmishing javelin-armed light cavalry and spear-armed infantry who would operate in tight formations. Archers and slingers were also used.

The Romans of the time were unlike those that had wrought terrific victories during the high point of the Imperial years. Senior units were known as Palatini, but these were supplemented and often replaced by what became known as Comitatus units. Effectively these were retinues of warriors attached to a particular king or chieftain.

At this time legionary units were up to around 1200 strong. They did not have integral cavalry and artillery units, although they did have light infantry armed with missile weapons, which would mainly have been bows.

What was also significant about the period was that the Romans would have made use of Hun light cavalry. In fact Aetius had made something of a feature of using Hunnic troops in his numerous battles. The big difference between Hun-like cavalry and many other types of cavalry was the fact that they were prepared to fight at close quarters.

It would seem that both of the armies at Narbonne had elements of the Roman and of the Barbarian. 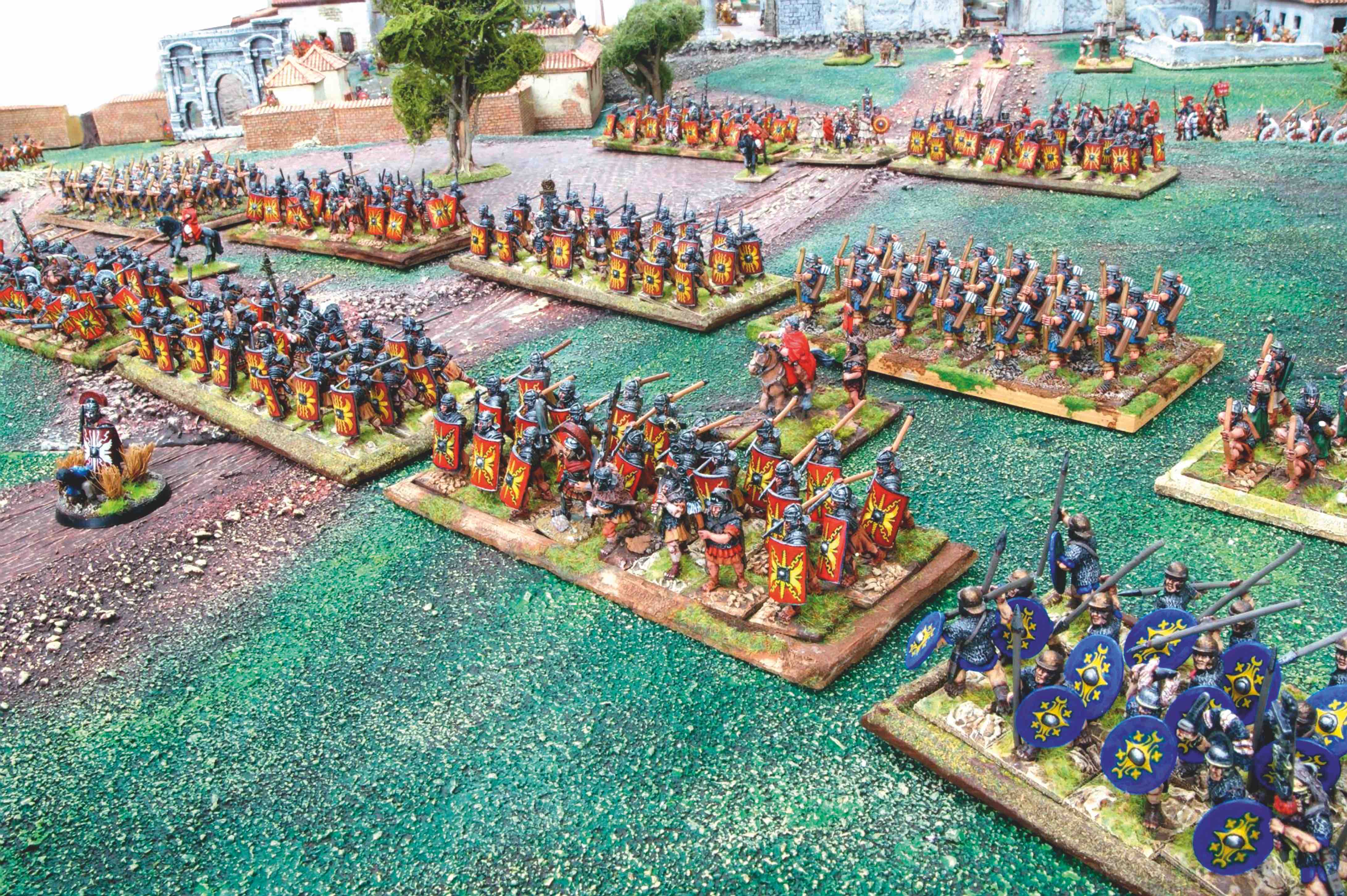 The battle is best set up with the two opposing armies lined up ready for a major engagement outside the walls of Narbonne. The game should be largely decided by the end of turn 12. At this stage it will be clear which field army has emerged victorious.

This is not a battle that should be fought to the very last man. Ultimately, although Litorius was charged with raising the siege of Narbonne, it would have been a greater disaster for his field army to have been destroyed outside the city. This would have emboldened the Visigoths to extend their influence deeper into Southern France. Aetius would have been left with the prospect of having to continue the existing campaigns and handle a major threat to the south. He simply lacked the resources to do this. The Visigoths, although keen to extend their sphere of influence, would not have risked their field army and resources to the point where it would expose them to extinction.

The battle represents a fairly classical ancient engagement, with the bulk of the centre a predominantly infantry fight. This can easily turn into a bloody stalemate. The flanks dominated by cavalry are the main opportunities and threats for both sides. The Visigoth cavalry is a strong part of the army, but can be largely nullified by the range of mounted troops available to Litorius.

This is split into the two opposing forces:

The Roman force, under Litorius, would almost certainly have placed his infantry in the centre of his battle line. There would have been two lines of infantry units, with a small reserve to the rear. Litorius’s cavalry would have consisted of a Hun sub-commander on one flank and a smaller Roman cavalry commander on the opposing flank. For the Romans the main objective that would deliver a strategic victory is to break the Visigoth army. To gain a tactical victory the Romans have to destroy the siege equipment that has been placed on the table as a static objective. If the siege equipment is destroyed then the Visigoths would have to raise the siege themselves. 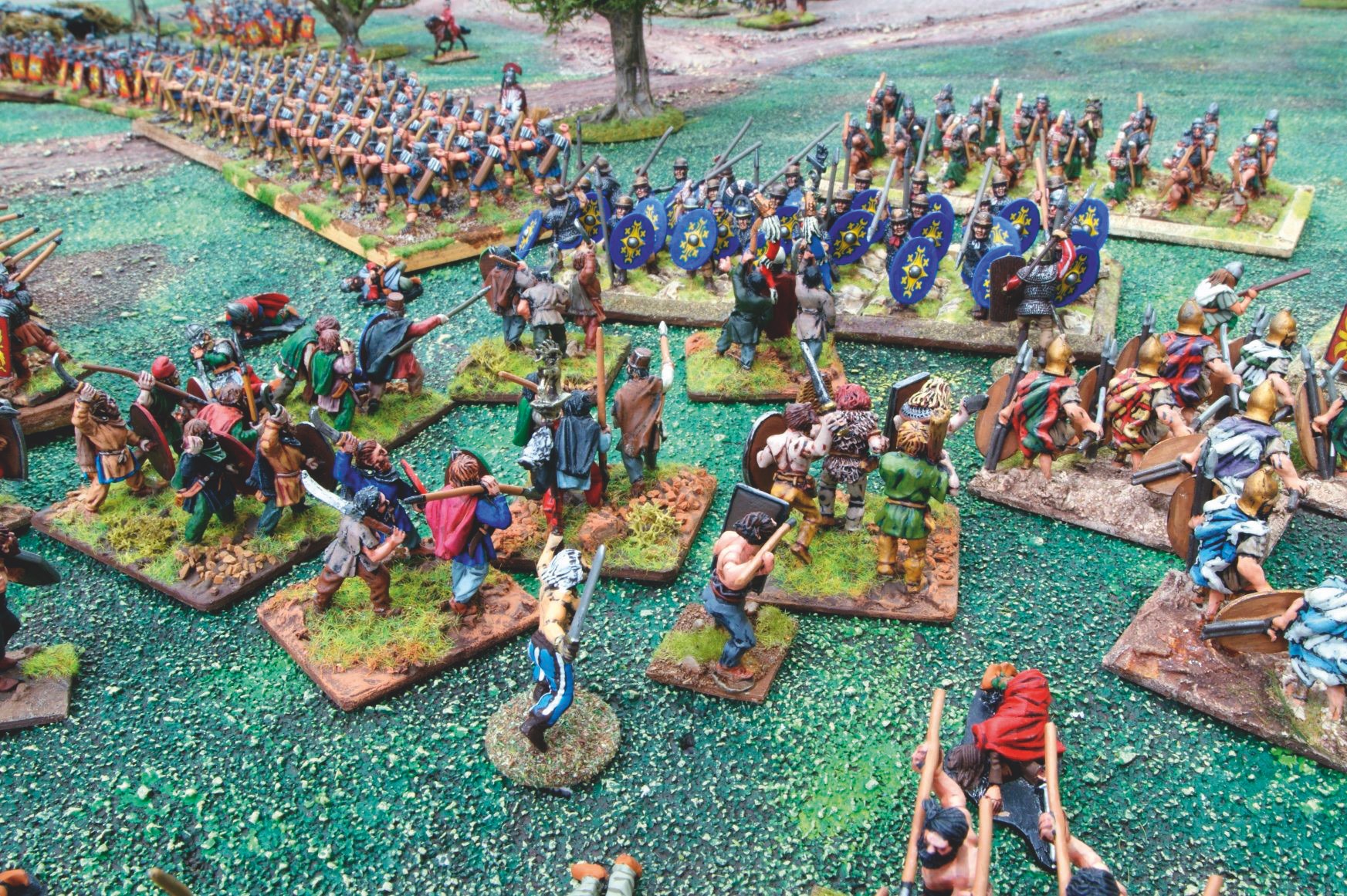 In typical Visigoth style, the bulk of the front line would have been solid infantry blocks, but with considerable numbers of heavy cavalry. Lighter troops would have been posted on the flanks. For the Visigoths in terms of objectives the key is to break Litorius’s field army, or at least break a wing of it so that the gate to Narbonne can be threatened. If any Visigoth units manage to enter Narbonne then this is considered a strategic victory. Beating Litorius’s field army and forcing it to retreat into Narbonne would represent a tactical victory and ultimately a huge headache for Aetius, who would have to march to raise the siege once again. We should probably assume that the Visigoths awoke to see Litorius’s army deployed ready for battle shortly after first light.

Again these will be split into the two opposing forces:

Theodoric can be positioned on either flank to command one of the cavalry wings although it is more likely he directed the infantry in the centre and that his retinue was used to plug holes in the line or lead counterattacks.

Litorius is one of these men of action so he would likely to be wherever the fighting is the fiercest. If the Roman player intends to launch a coordinated attack on the Visigoths, then Litorius is probably best located with the cavalry on one wing. The Hun allies should be placed on the opposite wing to protect the flank of the infantry.

WHICH RULES TO USE?

There are several options, perhaps the most apparent being Hail Caesar. Whilst not to everyone’s taste, the alternatives include Gripping Beast’s Spearpoint, and the very tournament orientated L’Art de la Guerre is also an option. DBA and DBM are no doubt still favoured by some, as are more obscure sets such as Armati. Another major option is the Warlord set or Warlord Advanced Guard if you want to use the “lite” version, both from veteran Trevor Halsall (there really are so many options today for rules of this period: I’d add Mortem et Gloriam to that list as well. Ed.)

Some players will obviously want to use Warhammer Ancient Battles which are ideal for this type of battle. This is a big battle engagement, but both sides have fewer than 20 units each and there is no reason to have large units with huge numbers of figures, the proportions and troop types should simply reflect the balance in the army lists. I have extrapolated the armies from the very little information available about the engagement, so feel free to amend if you disagree. 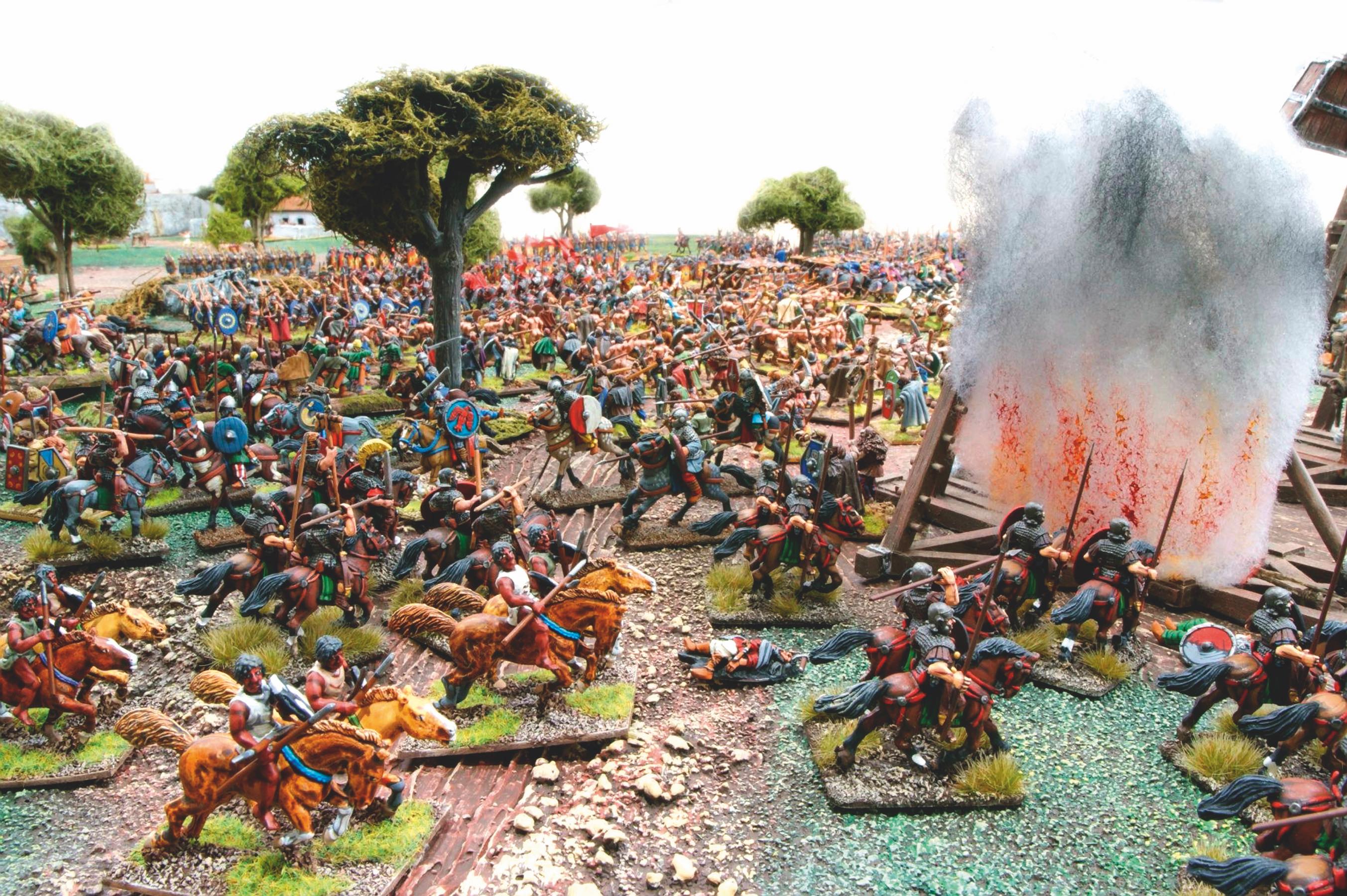 Precise details about the siege are fairly scant, but what we do know is that the Visigoths had brought up siege equipment. By the time Litorius arrived the walls were on the verge of collapse. We also know that a large proportion of the inhabitants died of starvation. In some accounts Aetius is described as having been present at the battle, but it is more likely that Litorius was acting under his direct instructions.

What is unclear is whether the Visigoths were defeated by Litorius before he reached the city itself, or whether Litorius’s men got into the city and launched their attack to break the siege from there. We do know that the siege was lifted fairly quickly once Litorius had arrived and that it was a decisive victory that saw at least 8,000 Visigoths killed. Despite their obvious differences, Aetius and Theodoric joined forces to fight against the Huns in 451. Narbonne was finally conquered by the Visigoths in 462 and Toulouse became the capital of the expanding kingdom.

He fought mainly against the Visigoths and with the help of the Huns he managed to drive them back to Tolosa (Toulouse) their capital. He was beaten at Tolosa and captured and died in captivity as a result of his wounds in 439. The defeat was a disaster for Rome.

Aetius did manage to come to terms with Theodoric, but the truce meant that the Visigoths had a permanent home in Tolosa, slap bang in the middle of the Empire. The Hun allies also disappeared to ride east to fight the Eastern Roman Empire.

Aetius would have to juggle a difficult situation for some years until a man called Attila murdered his own brother and became the undisputed leader of the Huns. Things were about to change once again.