An Interview with Flaminia Brasini and Virginio Gigli of Acchittocca 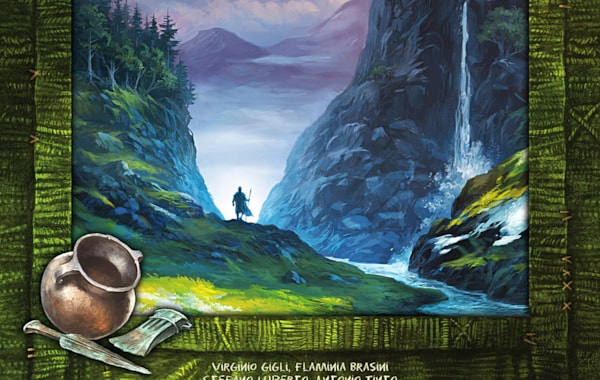 "Who’s turn next?” is the phonetic Italian joke of Acchittocca (“A chi tocca?”) – the question we’ve all passed around the table of a games night – usually after something very complicated has happened within the machinery of a large Eurogame. Acchittocca is also the name for something of an Italian supergroup consisting of Flaminia Brasini, Virginio Gigli, Stefano Luperto and Antonio Tinto. Together they’re behind the likes of Nile bothering and pyramid building game Egizia and painting assistant management game Leonardo da Vinci – both of which were received well by the Eurogamer community. Their next outing takes us back to historical Italy, or more accurately, prehistorical Italy.

“We think the real challenge for primitive man was that they often didn’t know what they would find beyond the horizon,” Virgino Gigli and Flaminia Brasini tell me over email. This, then, is Terramara, the new heavy Eurogame which had some queuing up at Essen 2019 in the ‘Hot Games’ section. Players take the role of clan chieftain of a bronze age village in Terramara – a lakeside community along the River Po. As the leader of this tribe you have tough choices to make, “The farthest territories are richest, but the explorers need more time to come back,” says Gigli and Brasini. This mechanic is one of many where committing your resources (sending someone from your village on a distant mission in this case) means they won’t return to you until later rounds, when the board state may be entirely different. Each round the players place their workers to gain materials and advance the three (culture, military, or trade) tracks. These tracks all interact with one another, and require balancing of their own. The culture track is probably the simplest, represented by a river – moving along this makes any ‘downstream’ artefacts on the track available for purchase. These artefacts are added to your village, and provide a kind of engine for converting materials or gaining power.

The military track allows you to boot other players’ workers off certain locations, assuming your marker suggests you have the strongest military might. The track on the axis of time is the trade track, and allows the movement of two caravans. While you can speed along and pick up everything at each depot, it’s a balance. When the board flips at the end of each turn there may be a better placement opportunity closer to home – but you caravan can’t go back. “In this way, each round, players have new situations to face; the placement areas are reduced and the fight for the resources is tenser,” the designers say “but the stronger territories become closer so it’s important to choose when to travel to the farther lands.” This is the risk of exploring in Terramara, it’s a delicate tightrope act to navigate your people through the harsh bronze age world towards prosperity.

The permanence of change is a theme that runs strong through the game. You want to improve your village, your military power, and your cultural effects to be able to enhance the engine of your village – but there is a sense that something is lost in making these choices.

At the end of each round the board, made up of 12 letterbox tiles that fit within the play area, is partially flipped. This ingenious board design is an interesting step away from the modular and configurable boards we see more of in games, and its sense of containment fits snuggly with game’s setting. While you’re in a single location along the River Po, and your scope isn’t a huge empire, you are instead hoping to secure the future of your people with actions now which will ripple out forward in time.

Each row is its own pocket of passing time, and as such is flipped at the end of that turn. If you have workers placed on those slats, then they return to you. These areas are now open to you to use if your caravan is at the right point to give you access, and they offer powerful options later in the game. Another example of this is how the character cards can ‘grow up’ at any point, changing the innate abilities that each player has. Like the way the land changes beneath you, you can’t go back.

“The theme drew us in this direction. The territories change during the game because the clans use them, the children grow up – and all of this is irreversible,” we’re told. This might be the way that prehistoric man began looking toward their own mortality, and designing ways to begin creating permanence. There’s an answer for this too, “your development, represented by your artefacts, give you permanent effects that improve your village structure,” say Gigli and Brasini. This adds a mechanical interest in the way the game is played, “permanent effects make the choices of the players more important; if the game conditions change, players have to continuously reset their mind and their strategies.”

Terramara offers a kind of DIY-asymmetry, as you play, you build your village and the status of each of your tracks. While investing in one part gives you an advantage, your opponents might be opening up some way to push back. The team attempted to find a way between direct conflict and semi-solitaire Eurogames, “In Terramara there is a strong interaction during the placement phase in order to gather the best resources. The military strength, allows you to have more or less freedom during this phase,” says Gigli and Brasini “there are also several ‘races’ in the game,” they say, referring to the dash for power along each track. However, unlike many Eurogames, there is also something of a direct conflict in the ‘raid’ action. This allows players to steal resources from all other players, again using their military strength, this is relative, however, with the difference between the military strength, and the amount of resources in the player’s supply being what dictates how successful the raid is.

The balancing of the game was one of the most difficult parts, Gigli and Brasini tell us, “The main challenge in Terramara developing has been the balancing of the territories in order to make really interesting the main mechanic. Farther the territories are stronger; but how much stronger must they be than the closest one?” This main question in the design is the one the team wanted to give the player during this complex game – that, and an ability to replay with new strategies each time.

“I like very much games in which the players have to face a very different situation during each game; for this reason, there are so many variable elements during the setup, and the characters,” says Gigli and Brasini. The tension between players is a constant tug of war between the commitments you decide to make, and those you hold back on. Everything in the game costs the players, and the decisions you make are often permanent. This tension is important, the choices you have to make for your people are hard. This then is the crux of it for Acchittocca, the whole philosophy behind the games they make. As Gigli and Brasini say, “Games have to be uncomfortable.”