All the Jahres: Hare and Tortoise James Wallis charts the many games that have been awarded the coveted Spiel des Jahres. This issue: Hare and Tortoise.

Of all the games awards, the Spiel des Jahres is the one that matters. Its red, blue or black logo on a box can transform a game into a modern classic and add as much as half a million extra sales. Like the Nobel prize it’s judged by a small panel of experts – in this case German-speaking games critics, rather than a public vote, and over its 36-year history it’s anointed most of the great titles of the board-gaming renaissance. It’s a big deal.

More than a hundred games have won a Spiel des Jahres award since the first was announced in 1979. The market for games has changed beyond recognition since then, as designs have improved and tastes have changed. How do the early SdJ winners stand up to today’s titles? Are they good by modern standards? Which of those dusty boxes are worth reopening?

The winner of the first Spiel des Jahres, Hase und Igel, was not a German game. It had appeared in English five years earlier as Hare and Tortoise, the brainchild of British designer and games authority Dave Parlett (and not to be confused with Iello’s recent The Hare And The Tortoise by Gun-Hee Kim). The SdJ was established to champion games published in German, which is why it took so long to recognise Hare & Tortoise, and also Acquire, another 1979 nominee, which had been originally published by 3M in 1962.

Hare and Tortoise is a non-random card-based race along a 65-square board: first to the end wins, as long as they’ve dropped off three lettuces on spaces along the way. However it costs one carrot to move one space, three to move two, six to move three, and so on. Since you only start with 65 carrots, the skill of the game is in balancing speed of movement with landing on the best spaces to refill one’s vegetable supply, trying to predict what the other players will do, and blocking them. 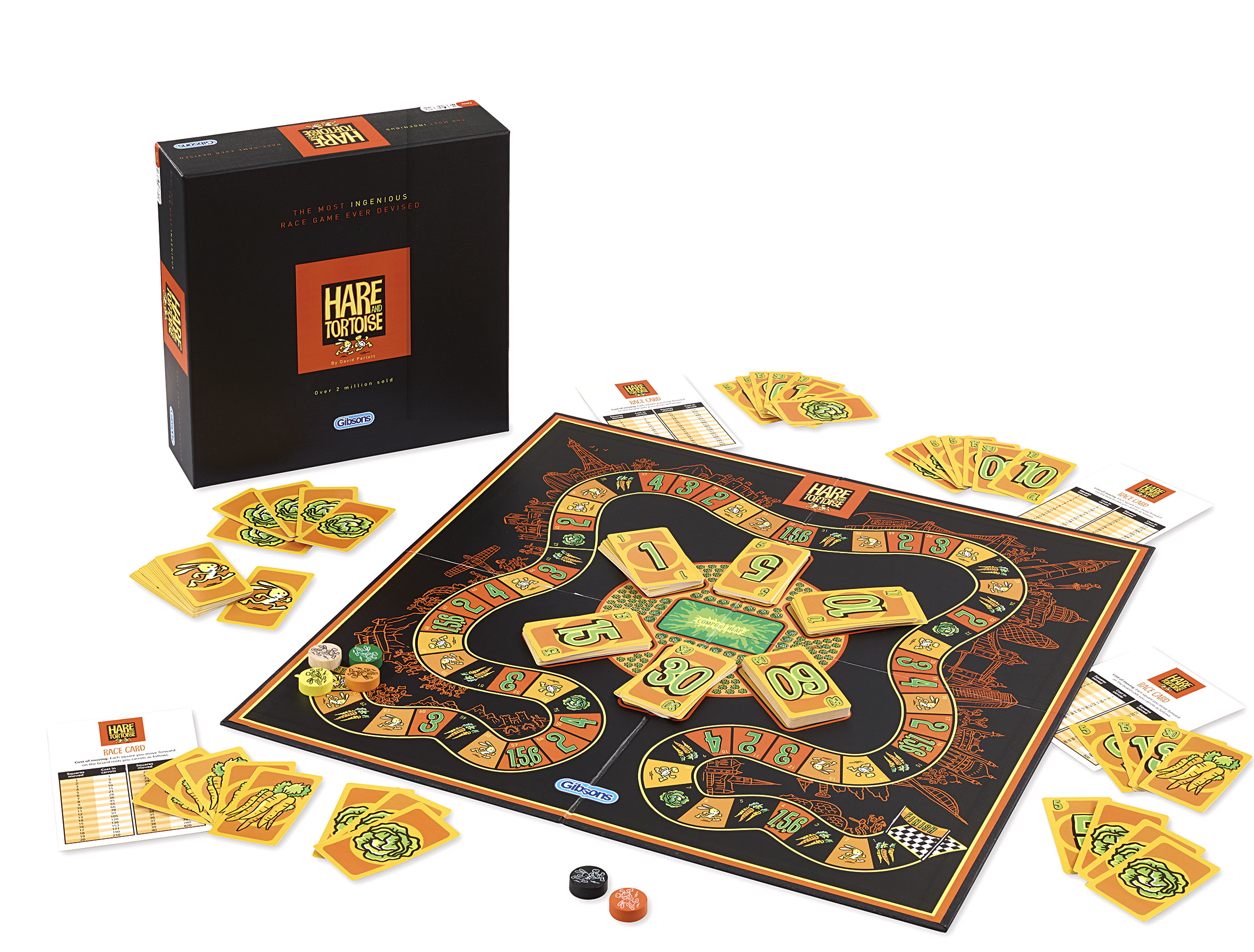 The heart of the game is in the spaces on the board. The simplest are Carrot spaces, which give you 10 carrots if you spend a turn there. Numbered spaces are a gamble: if you land on a three, say, then you’re predicting that at the start of your next turn you’ll be in third place, and if you’re right you get 30 (10 x 3) carrots. But the gamble is a public one, so other players can manoeuvre to mess up your guess. This is a breathtakingly good mechanic, and transforms the game from a straightforward race into a battle of wits and strategy.

Elsewhere on the board Tortoise spaces must be approached backwards and reward you with more carrots, Lettuce spaces are for dropping off lettuces, and Hare spaces… Hare spaces are controversial. Most editions of the game have a deck of Hare cards with random effects. These are not loved: some are unbalancing, and they add a jarring random element to a game that’s otherwise refreshingly free of chance. Parlett himself has said that the Hare space should be played as a miss-a-turn.

A ‘miss a turn’ space sounds like something out of a 1950s game manual, and these days it’s one of the canonical bad rules for new designers to avoid. But Hare and Tortoise makes it work because the turns are short and missing one is a strategic choice, not a random punishment.

The game stands up amazingly well. Hare and Tortoise is a brain-scratching delight, as clever and as charming as the day it was published. It’s a little more complicated and a little less slick than modern Eurogames, but it makes up for that with engrossing and original gameplay that still feels like nothing else. Some people dismiss race games as lacking strategy and elegance but Hare and Tortoise puts the lie to that: there are no easy decisions here, no simple tactics and no best strategy. This is a game that keeps you on your toes up to the last move, and winning feels like a real victory.

In 1979 David Parlett didn’t learn of Hare and Tortoise’s victory in the inaugural SdJ, and hadn’t even heard of the award, until legendary designer Alex Randolph informed him over lunch in London. It won, Parlett believes, because ‘it came near the top of everybody’s list while its rivals ranked highest with some critics and lowest with others’. In retrospect, he says, the SdJ has meant ‘pretty well everything’ to his career in games, though he adds that it’s ‘a bit disconcerting when someone comes up to me and says “My parents used to play that”!’

Worthy winner? Yes, though Acquire (another shortlisted title) is also a masterpiece

Availability Still in print in a handsome edition from Gibsons Games

This article originally appeared in issue four of Tabletop Gaming. Pick up the latest issue of the UK's fastest-growing gaming magazine in print or digital here or subscribe to make sure you never miss another issue.