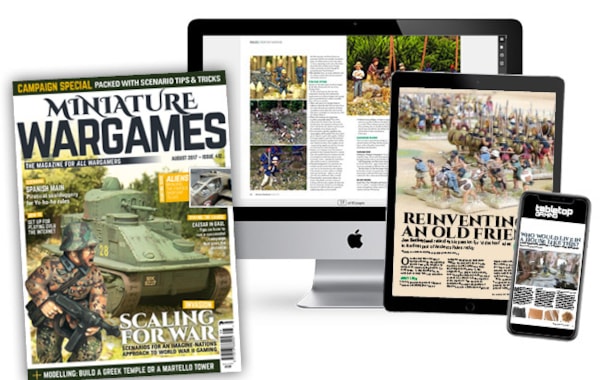 As we commemorate the 80th anniversary of The Battle of Britain, we look back over Miniature Wargames and how the battle has been played out over the years.

The official anniversary date for The Battle of Britain is the 15th September, and this year (2020), marks the 80th anniversary.

Over the years Miniature Wargames has featured numerous articles and features regarding World War II and, in particular 1940. We reflect on this momentous anniversary by providing you with an opportunity to look back at just a handful of these features via Exact Editions and our 10-year archive. Click on the titles below to be taken directly to the feature.

•    Prelude to Sealion, a skirmish level scenario from the dark days of summer 1940. Feature from the September 2010 issue.

•    Sealion Choices - looking at the options Germany faced when planning the invasion of Britain in 1940 and the implications for wargaming them at a strategic level. Feature from the October 2010 issue.

•    Jets over the Reich - Presenting an alternative ending to the Second World War that enables wargamers to stage dogfights between British and German jet aircraft.  Feature from the September 2011 issue.

•    France 1940 - Battle of the Breakthrough. A battle report from a large game scenario, involving an attempt by a combined force of French and British to cut off the German lines of communications as they advance into France. Feature from the August 2012 issue.

Exact Editions is a digital platform which enables you to download issues of Miniature Waragames on any digital device (including tablet, mobile telephone, laptop or PC). The benefit with this is that you can read issue wherever you may be in the world, at any time.

Exact Editions is different to all other digital edition platforms as you also have the added benefit of being able to access our 10-year archive giving you access to over 135 issues of Miniature Wargames at the touch of a button!  With search functionality within the archive you can search terms, themes or specific games.

To find out more regarding Miniature Wargames and Exact Editions, click here.