As one of several new releases from Gale Force Nine this year, World of Tanks takes the popular online video game and fuses it with the publisher’s own 2016 miniatures game, Tanks. This reimplementation sees players fielding opposing teams of famous tanks, with the aims of either holding objectives or simply eliminating each other.

Fans of the fantastic X-Wing Miniatures Game will find obvious similarities in the general game flow; vehicles will first move, acting from lowest initiative to highest, before reversing this order in the shooting phase. Movement rules are incredibly simple, and are handled by one small template. Whilst this limits low initiative tanks' abilities to make unexpected moves, it does make rounds swift and spontaneous. Of course, this renders high initiative vehicles as extremely valuable, perhaps unfairly so when considering the fairly small points difference between some models.

The more predictable process of movement lends itself more to strategic planning over retaliatory tactics. That said, each tank can still hold a few unexpected tricks up their armoured sleeves. Before each game, players can boost the point values of their tanks with a variety of modifications. These cards range from talented crew members to a wealth of upgrades and lethal additions. Suddenly, low initiative tanks can become unlikely key players in the shooting phase, thwarting the calculated plans of opponents and potentially turning the tide of battle.

Throwing a further curveball is the ingenious decision to equip these cards face down, revealing them only when used. This design choice elevates tension – thematically mirroring the sense of facing a multi-ton armoured beast with no inkling of what surprises lurk under its hulking exterior. Much like X-Wing, it will be interesting to see the variety of deadly combos players can muster up with the upcoming waves of expansions. 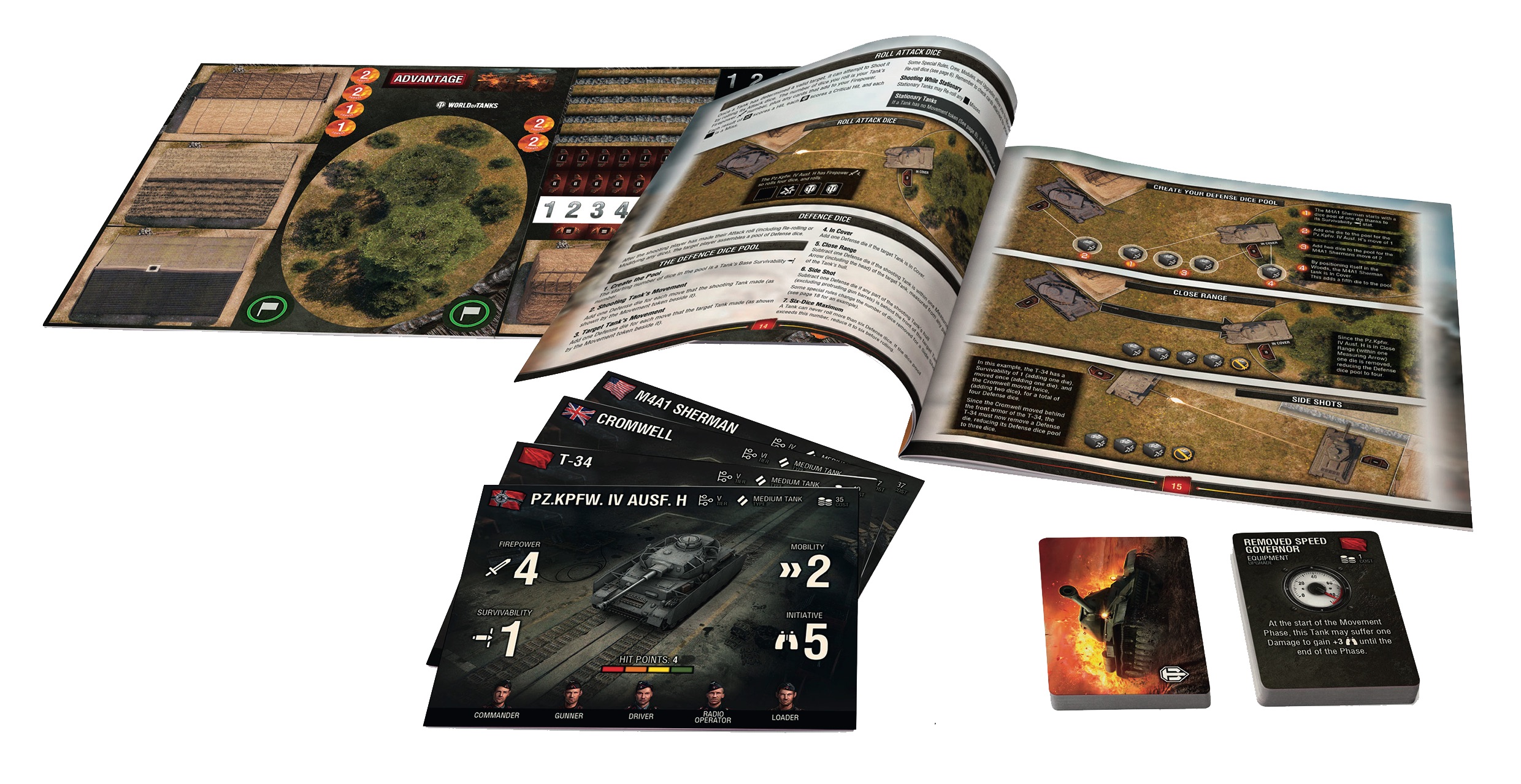 Whilst artillery enthusiasts will take pleasure from the brief but interesting snippets of information seen on each of the tank cards, historical accuracy and realism nonetheless take a back seat in World of Tanks. As the name implies, this is fundamentally a game about tanks, not the realities of war. In fact, there’s nothing stopping players from fielding teams comprised of both axis and allied machines. This alone gives World of Tanks a great deal of flexibility in regard to team building, particularly in comparison to other miniatures games.

As for the miniatures themselves, these tanks are fragile – an oxymoron if ever I heard one. The sculpts are reasonably detailed but the basic paint jobs do little to highlight this, and without some customisation, larger teams of tanks may be hard to tell apart. Fortunately, the turrets move – that’s a plus from us.

Elsewhere, component quality is fine. Cards have a plastic feel to them but should be plenty durable, and the terrain pieces are functional and reasonably detailed. In our first play through, the included forest terrain pieces were swapped out for 3D trees. These were swiftly removed upon remembering that, despite providing cover, forests are still navigable terrain. Nonetheless, avid wargamers will likely want to substitute the 2D buildings for something more thematic.

For those put off by the often imposing scale of many historical war-games, World of Tanks may be the ideal choice for players wanting a slick, frantic, and fun dive into the gritty theatre of tank warfare.

World of Tanks' simplicity pits enticing approachability against potentially limited replay value. Fans of similar games will crave a tad more depth, whilst newcomers will hopefully revel in this launchpad into an amazing hobby.

TRY THIS IF YOU LIKED X-WING MINIATURES GAME...

Despite the obvious similarities, World of Tanks should comfortably appeal to its own audience of casual newcomers, light war-gamers, and general enthusiasts of these fearsome combat vehicles.