“I’ve never seen so much cash in my life.” Those were the words I depressingly uttered as my three year old son popped out the hundred dollar tokens from the punchboard. Indeed, my life is a far cry from the romanticised drama and excess of Chicago’s roaring twenties, but at least Gale Force Nine are giving me the opportunity to play out this era of guns, glamour, and gangsters on the tabletop.

Wise Guys is an exciting new 2022 release for Gale Force Nine. Not only is it a reworking of the oft overlooked but nonetheless popular Sons of Anarchy: Men of Mayhem, but it is also the publisher’s debut non-licensed game.

Historically rooted in prohibition-era Chicago, players will each control one out of the four notorious rival gangs vying for dominance across the city. As they travel between often contested locations, players will be trying to secure the best deals for guns and liquor before cashing in on the black market, hoping to rake in the most dough after the game’s six rounds.

Much like Sons of Anarchy, Wise Guys is a masterful cross between area control and worker placement. Each gang will have a number of Made Men and Associates, with more employable along the way, who will be placed on locations to hopefully reap their benefits. More often than not though, players will have to compete for control of a location before exploiting its abilities. 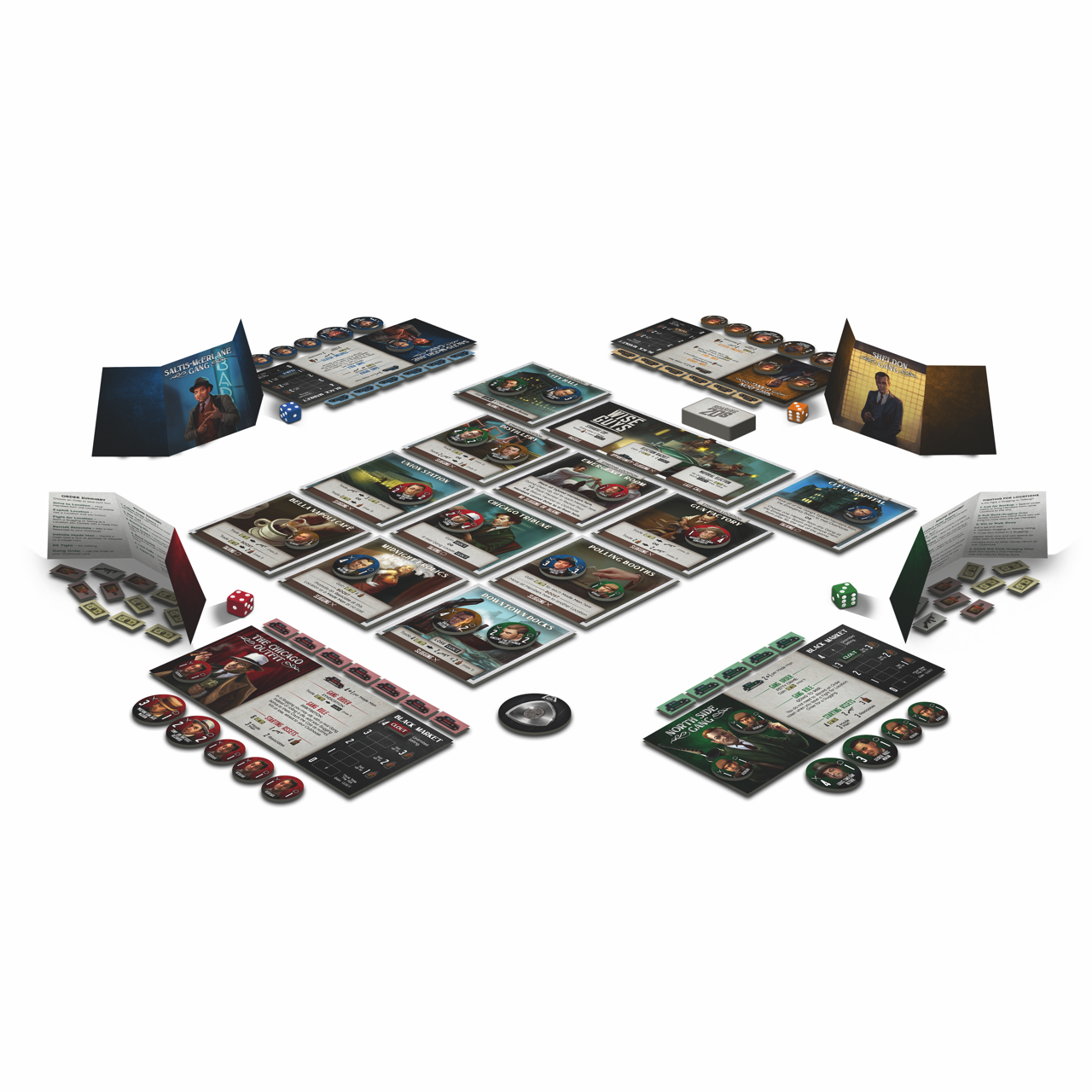 The whole system is driven by the use of action tokens, a number of which being assigned each turn depending on which particular gang it is and the number of members. Aside from spending them on moving, exploiting locations, and initiating fights, players can also choose to activate gang specific abilities, employ more Associates or upgrade them to the more powerful Made Men. In a nice change from Sons of Anarchy, the strengths of individual gang members can differ, with some excelling at ‘slugging’ and others boasting more impressive stats when engaging with the new ‘talking’ fights.

Despite boiling down to a simple case of rolling a die and adding a gang’s strength, combat evokes a great amount tension through its structure. Firstly, additional Orders can be spent calling backup from other locations, putting pressure on the player initiating the fight to observe exactly where the remainder of their opponents’ members are residing, and how many Order tokens have been held back. Next, a dangerous game of bluffing ensues, as players clench an untold number of firearms within their fists before simultaneously revealing. Not surprisingly, sneaking guns in to a fist-fight has consequences; regardless of who wins or loses, each gun will land a member straight in the emergency room as well as lowering their standing at the black market.

A simple but integral part of Wise Guys’ genius are the Roaring Twenties cards. These events can range from having immediate or ongoing effects for the round, to even providing temporary additional locations. Brilliantly, these cards do more than add a little flavour to the game, introducing challenges, opportunities, and twists of fate that make each round feel unique and distinct like scenes from a film.

Overall, Wise Guys is an excellent revamping of a great system. Fans of the original may lament on the use of cardboard over cute plastic tokens - but I sense a niche gap filling in the Etsy market as I write.

A thrillingly interactive area control game which succeeds at interspersing moments of Ameritrash drama between its more euro-styled strategic interludes.

TRY THIS IF YOU LIKED SONS OF ANARCHY: MEN OF MAYHEM

For those not drawn to the original’s license, Wise Guys’ broader theming could prove ideal.