The post-apocalypse has never been so full of life

What is it about the end of the world that convinces everyone to fuel up their gas-guzzling trucks and hit the road? Whatever it is, we can’t get enough of it.

Wasteland Express Deliver Service is a collaborative effort between Dead of Winter co-creator Jon Gilmour and Matt Riddle and Ben Pinchback, the designer pair behind the card game spin-offs of Back to the Future and The Goonies. A different ‘80s cult movie franchise thrums in the background of WEDS like a purring petrol engine, but it’s the influential out-and-out flair of riotous car chase fest Mad Max – rather than its name and characters – that counts here.

Before the good – and, boy, is it good – it’s time for the (very slightly) bad. There are a hell of a lot of pieces needed to play WEDS, and they take a very long time to punch out of dozens of boards the first time around. It’s something you’ll want to do before gathering up your group to play, unless you like never seeing your friends again (or they have an irrational love of repetitive tasks, in which case make a brew and sit back to watch). While the initial unpacking can be heavy-going – it took us around an hour to sort everything into their designated holes – WEDS’ creators have thought ahead with an outstanding series of plastic trays that helpfully keep every bit and piece exactly where you need it for future games. Honestly, we’re talking a Mechs vs Minions-level of godly box design here.

The manual doesn’t help things get rolling either, overcomplicating a straightforward set of rules with a poorly-structured guide and lack of clear reference points for newcomers. However, after you’ve learnt the rules and played a couple of times, the trays make setup and teardown a brief matter of minutes, meaning your efforts at the start don’t go unrewarded. 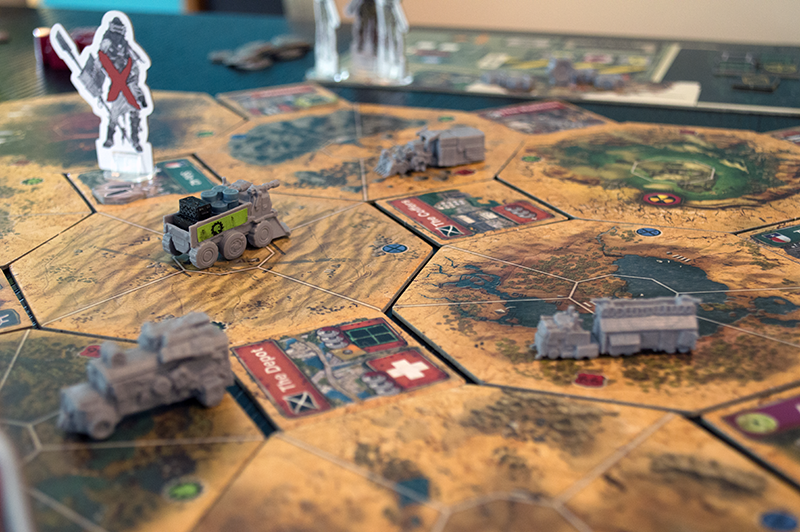 Once you’re up and running, there’s no need to hit the brakes. Like the trucks and their drivers that players pilot across the near-deserted wastes of the post-apocalypse, WEDS puts the pedal to the metal from the start line, offering up three shared contracts – as well as a starting private objective for each player – that direct the lorries around the irradiated landscape.

As the name suggests, this is a game about delivery – whether that’s satisfying the supply-and-demand of scattered outposts seeking water, food and weapons, hauling a nuclear bomb into the heart of a raider outpost or digging up and transporting the corpse of a half-man, half-machine monster to harvest for parts. It takes three completed contracts to win the game, but some are lesser jobs that offer up rewards in scrap – the currency of the end of the world – and other benefits, such as helpful passengers, making them worthwhile to fulfill in-between aiming for the big goals.

At a couple of hours long, WEDS isn’t a short game, but it is a fast game. This is a sandbox adventure, allowing players to visit outposts, purchase cargo, upgrade their truck, hire allies, acquire missions, deliver goods, and fight and pillage either raider enclaves or roaming raider trucks. Despite the variety of options, the tempo never lets up thanks to a graceful action selection ‘dashboard’ for each player that keeps individual turns brief yet meaningful. Key to this is the ingenious momentum system, which steadily offers players the ability to move further and further with a single action following successive moves – or sacrifice their built-up motion by instantly performing a different action with no additional cost. This means that turns are very rarely spent just moving, presenting a consistent feeling of progression and pace as each truck zooms around the randomly-generated map, slowing down to collect or drop off commodities before whizzing off again.

Combat is similarly snappy, consisting of little more than a simple dice roll against the defence value of a randomly-drawn raider enclave or truck card. Failure means taking damage – but this never leads to total destruction, just the risk of losing storage room and ultimately precious cargo before being repaired. While combat is frequent, it never occurs between human players – although a designer variant offered in the back of the rulebook does present optional rules for head-to-head clashes, if that’s more your style.

While the lack of player interaction by default may be off-putting for some, it keeps the focus on the frantic dash to complete contracts ahead of your rivals rather than getting bogged down in back-and-forth scraps: this is a race, rather than a brawl. Instead, the main way for players to impede each other is by moving the three roving raider trucks by landing on specific spaces, granting them the chance to move the foes into a new area. The only other real danger is radiation, again resolved with a single die roll. The pace of the whole game means that such encounters never feel simplistic – they’re exactly as weighty as they need to be to feel consequential without bringing everything to a screeching halt. 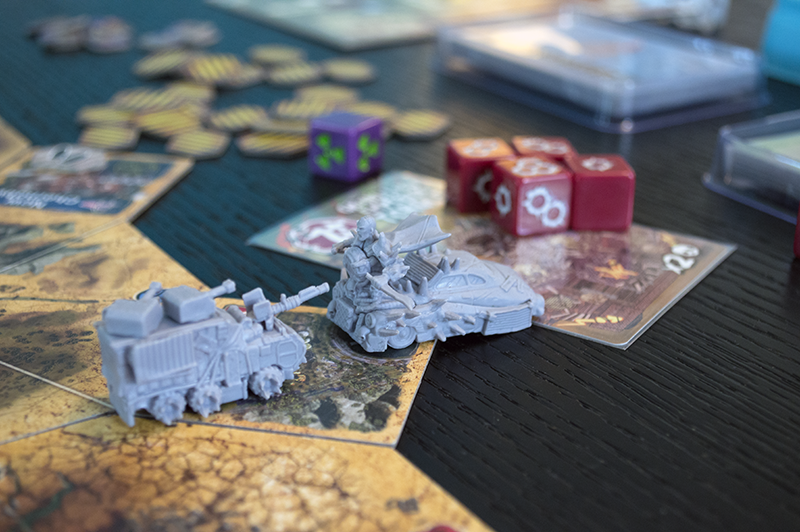 There are plenty of post-apocalyptic games out there, but even some of those with engaging gameplay often have forgettable worlds. That’s not the case with WEDS. An abundance of story and lore seeps into every available gap across the game, from the rulebook to players’ contracts and the random event cards drawn at the outset of each round. The six drivers are diverse and well-characterised, while the multiple factions that operate across the world – the culture-obsessed Archivists, broken New Republic Army and religious Oracles of Ceres – tie into a wider story that can be explored further in an eight-mission campaign.

While the campaign starts out slow, with minor tweaks to the standard sandbox mode, it shifts gears in its latter half with more substantial changes to the setup and rules of each scenario. It’s perhaps not as extensive as it could be, but the sheer number of different alternatives offered by even the standalone main mode is such that there’s never a lack of variation. There’s even a suggested gameplay variant from each of the game’s creators – something we’d love to see more often in games.

The universe is brought effortlessly to life by the stunning illustrations of talented comic book artist Riccardo Burchielli, which brim with the same visual energy, invention and anarchic style as series such as Tank Girl. If WEDS doesn’t have the best artwork of any board game we’ve ever seen, it’s damn close. This is combined with character and vehicle designs that combine clear homages to Mad Max with hints of cel-shaded video game Borderlands and countless other influences to create a style that nevertheless feels refreshingly distinct, instead of pandering or tipping over into cliché. The game’s writing and flavour is impressively strong given the long history of bland and generic wastelands on the tabletop, kicking in with a jet-black dose of surreal humour, effective world-building and knowing pastiche that – despite the out-there visuals – thankfully doesn’t overdo it.

WEDS stalls at the start with an imposing first-time preparation and unnecessarily frustrating rulebook, but these small bumps can’t stop its payload laden with stacks of personality, polish and unrelenting gameplay oomph from ultimately bringing the goods. Strap in for a hell of a ride.

If you can get past the slow start of your very first game, WEDS soon kicks into gear with a fast and furious romp through a wasteland like no other. From there, the momentum of the high-octane gameplay and incredible visuals never let up – it’s a non-stop joyride.