Voices in My Head Review Read our feature with the designer here!

You’ve got to hand it to Corey Konieczka. After leaving Fantasy Flight Games and naming his own publishing company Unexpected Games, he’s absolutely, admirably committed to turning out titles that don’t feel like anything else on the tabletop right now. First, there was comic-book codebreaking co-op The Initiative. Now, hot on its idiosyncratic heels, we have Voices in my Head, a courtroom-drama area-control game with minor dexterity elements that requires all but one of its players to command aspects of a feckless bank robber’s personality. What the huh?!

In all honesty, it’s so out-there it’s kind of hard to grasp as a theme, and as a consequence it’ll likely take a few plays before you can latch on to any solid strategies. On one level, you’re all tussling to win over a jury in a manner similar to last year’s neat two-player Lawyer Up. But there’s an asymmetrical aspect through which one player must take the role of the Prosecutor, who is determined to find the defendant (with the deliberately generic name of Guy Johnson) guilty. However, they can’t get stuck into the mind-related gameplay as directly as the others, and must also thread each game’s loose, bitty card-driven narrative together as a sort-of-but-not-really Dungeon Master.

Everyone else, meanwhile, is operating inside Guy’s brain according to their own randomly dealt, hidden role. Righteousness, for example, wants three or more jurors (or rather, pairs of jurors; it’s a bit confusing) to find Guy guilty, with one or more undecided; Deception needs two or more innocent verdicts, with one or more undecided. This jury manipulation is largely achieved by ‘winning’ the trial card selected that round by the Prosecutor, which is effectively an event card, and often allows its winner the choice of two responses to its light-hearted vignette. However, the personality-aspect players are never certain what their reward will be, as the card is hidden behind the Prosecutor’s screen. (And even the Prosecutor’s unsure of half of the reward, as they’re not allowed to look at the card’s other side). It’s all rather tricky to intuit. 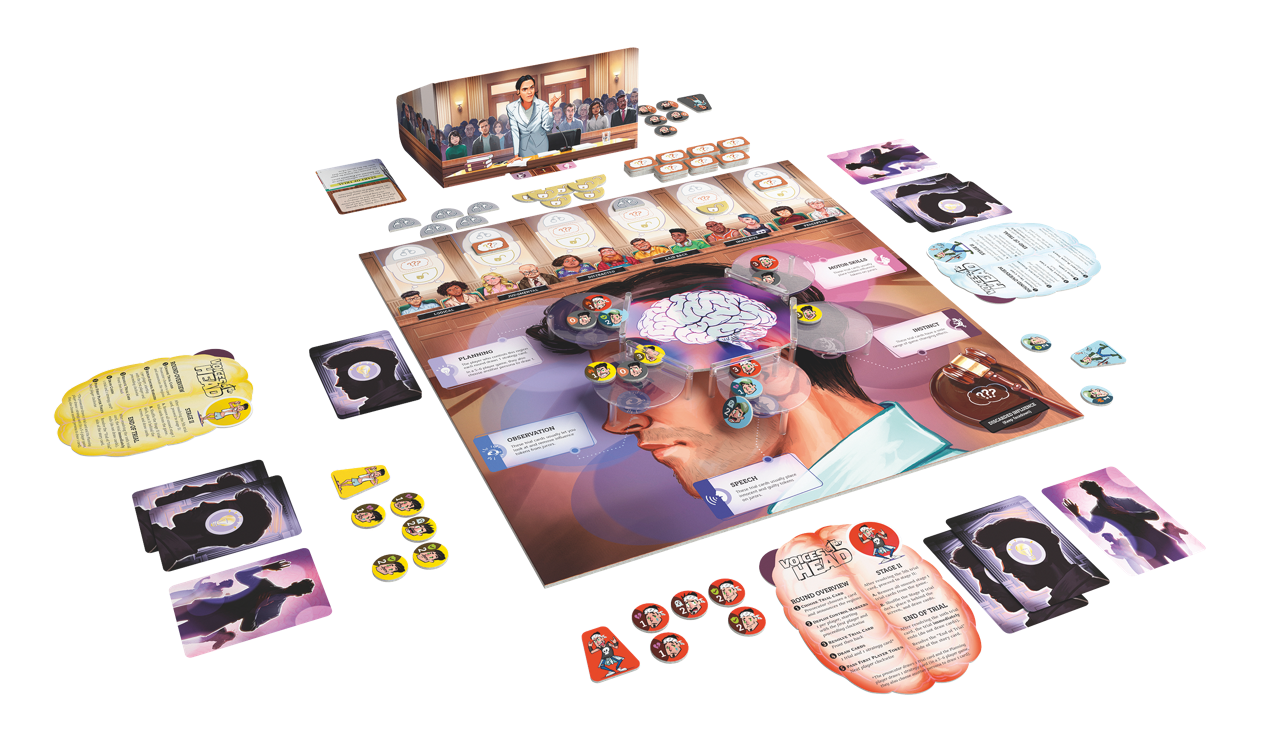 Winning each trial card requires controlling one or two indicated brain zones, which are impressively represented on the board by a quintet of clear plastic platforms, onto which numbered control tokens are moved, shove ha’penny-style, using a deployment stick. If your tokens add up to the highest amount at the round’s end, then you control that brain area, whether it’s Motor Skills, Instinct, Speech, Observation or Planning (this last one being a special area that rewards its controller with a handy Strategy card). But if any of your tokens are shoved off a platform’s edge, then they’re destroyed and out of the game (though not entirely, depending on other game effects).

As noted above, it’s really, really hard to figure out how best to achieve your objective, with so much hidden information and variously obfuscated cause-and-effects. But somehow it never becomes too acutely frustrating, thanks to the narrative’s gently amusing tone, and the light physical drama of shoving those tokens around on the plastic platforms.

Though we should highlight that playing the Prosecutor is significantly less fun than any of the other roles. Perhaps, if the court-room element were eliminated and it was a pure battle of personality traits inside someone’s mind, it would be an improved experience. Also, it would be nice if you could play around inside different people’s dilemmas, as opposed to just one goofy white dude’s.

Top marks for originality, but the lack of thematic familiarity presents a challenge to paayer engagement, as do its opaque objectives and the fact that one player will likely be having less fun than all the others.

TRY THIS IF YOU LIKED LAWYER UP…

Mechanically they’re very different, but still feel like cousins via their courtroom theme and jury-influencing elements.

Read our review of Lawyer Up by clicking here 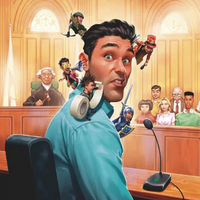 If you want to see more about Voices In Your Head, a great place to start is with the designer. We caught up on all things new, the changes in direction, and the Unexpected (Games) – be sure to check it out!

Voices in your Head