An exciting premise – but not furlong

I don’t have particularly fond memories of the bookies of yesteryear, but they’re not hard to recall. The potent blend of fresh and stale smoke, stinging the eyes and invading the nostrils. Huddled figures clutching betting slips, slumped before the hazy, flashing illumination of fruit machines. Fortunately, Horrible Guild Games have employed an overwhelmingly cheery take on the world of racing, swapping horses for unicorns and traditional pundits for goblins, witches, and all manner of fantastical foll. Just don’t deal with the Elf Mob…

Unicorn Fever is a colourful reworking of Lorenzo Silva and Lorenzo Tucci Sorrentino’s earlier game Horse Fever. Don’t worry, gambling’s still the name of the game, but here the tension unfolds through a pair of sparkly rose-tinted goggles. Players will be betting on the six plump unicorns, each poised to sprint across the rainbow toward the enticing pot of gold at its end. Before each race, deals can be made with unsavoury members of the fairy realm to help improve the odds, whilst some bettors may even try their hand at fixing the championship through magic. Whoever gathers the most glory after the fourth race is the winner.

Unicorn Fever fuses elements of tactics and luck to create its escalating gameplay loop. Each round starts with a planning phase in which players will take turns performing three actions. The actions available are in the form of disks placed on the board, with some allowing players to place bets, and others offering opportunities to gain contract cards, play magic cards, or take the first player token. 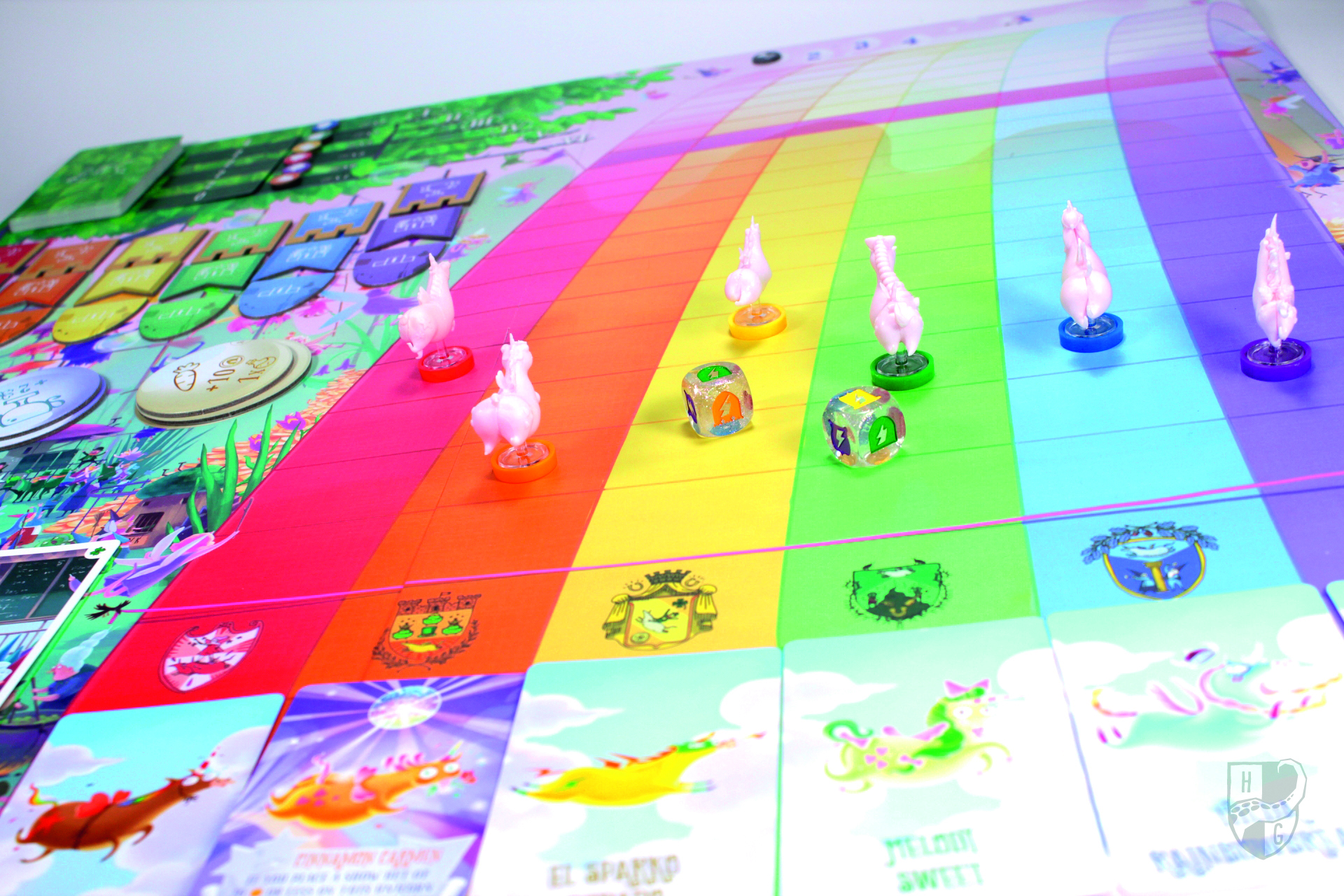 Placing bets is as simple as eyeing up the odds for the race and choosing a unicorn. Bets can either be placed on a unicorn to win or as a ‘Show Bet’, doubling the wager for unicorns placing either first, second, or third. Contract cards grant rule-bending abilities whilst magic cards are cast upon individual unicorns to inflict positive or negative effects during the race.

Adding some excitement to the action selection mechanics is the limited availability of the disks, with each becoming less powerful as more are taken, making speed and careful consideration a factor in the planning phase. The downside to this is how fiddly and tiresome this occasionally becomes for players yearning for the thrill of the actual race.

Once the planning is out of the way, the race begins! All magic cards placed beneath unicorns are revealed and the first card of the movement deck is drawn. The movement cards display numbered columns which correlate with each unicorn’s current odds. Generally speaking, the higher the odds the higher the movement value, although this is occasionally turned on its head. Following this, a pair of sprint dice are rolled, indicating which unicorns take an extra movement. Of course, the various magic cards can interfere quite drastically, and the chaos, tension, and frustration is a joy to behold!

Races end with the bets being paid out in both money and glory and the odds being updated, followed by the dreaded Glory Tax. Whilst the idea of players paying gold for each glory (victory points) they possess seems like a viable way of combating runaway leaders, this is often rarely the case, doing little to lessen the blow of repeated bad luck.

Unicorn Fever’s mashup of AI movement and luck-of-the-roll mechanics captures the thrill of gambling admirably, but even when paired with players’ decisions during the planning phase, this uncertainty can leave a sour taste for those trailing behind. Nonetheless, its colourful charm and exciting moments of competitiveness should satisfy the pundits.

Whilst Unicorn Fever boasts an aesthetic bolder and brighter than even John McCririck’s eclectic attire, its fiddly and often unforgiving gameplay leaves it just short of the finish line.

TRY THIS IF YOU LIKED WINNER’S CIRCLE

Their themes might be similar but Reiner Knizia’s 2001 title opts for aesthetic realism over fantastical fillies.