The Captain is Dead review The Captain is Dead

The Captain is Dead should really come with red shirts in the box, because – like Star Trek’s infamously ill-fated unnamed crew members – you’re going to die a lot in this game. And you’re going to have a hell of a time doing so.

The framing of the frantic co-op title is the last 10 minutes of every sci-fi serial since Kirk and Spock first boldly went: your leader deceased, your spaceship staff (positions range from janitor and hologram to admiral and ensign, Wesley Crusher knitwear not included) are desperately trying to repair the ship's jump core before increasingly aggressive aliens reduce your shield to zero and turn you into food for space worms.

Gameplay is reminiscent of Pandemic, as the uniquely-talented crew move between different areas (armoury, cargo bay, engineering) and do their best to hold off teleporting invaders (instead of infection cubes) and fix constantly failing systems. As in Pandemic, each player draws a card at the end of their turn that intensifies the situation but, unlike in the disease-curing favourite, there’s no real breathing point in the action spiked by the periodic panic of epidemics – here it’s always-on full-on as the cards ramp up to the all-but-instant death of the final few draws.

This can put your survival time down to the luck of the draw somewhat, but maximising your character’s abilities and working efficiently with teammates is key to lasting as long as you can.

There are a healthy variety of options every turn, whether you draw potentially beneficial battle plans (with Star Trek references aplenty), spend science to upgrade onboard functions, fire a torpedo to fend off damaging foes, collect limited-use tools or hoard skills in the hope of getting the engineering needed to shift the ship.

Even when failure hits you fast and hard – and it will – the experience is never less than gripping throughout thanks to the top-notch presentation of the components' vivid abstract art style, the hilarious and charming theme, and the superb execution of the gameplay. 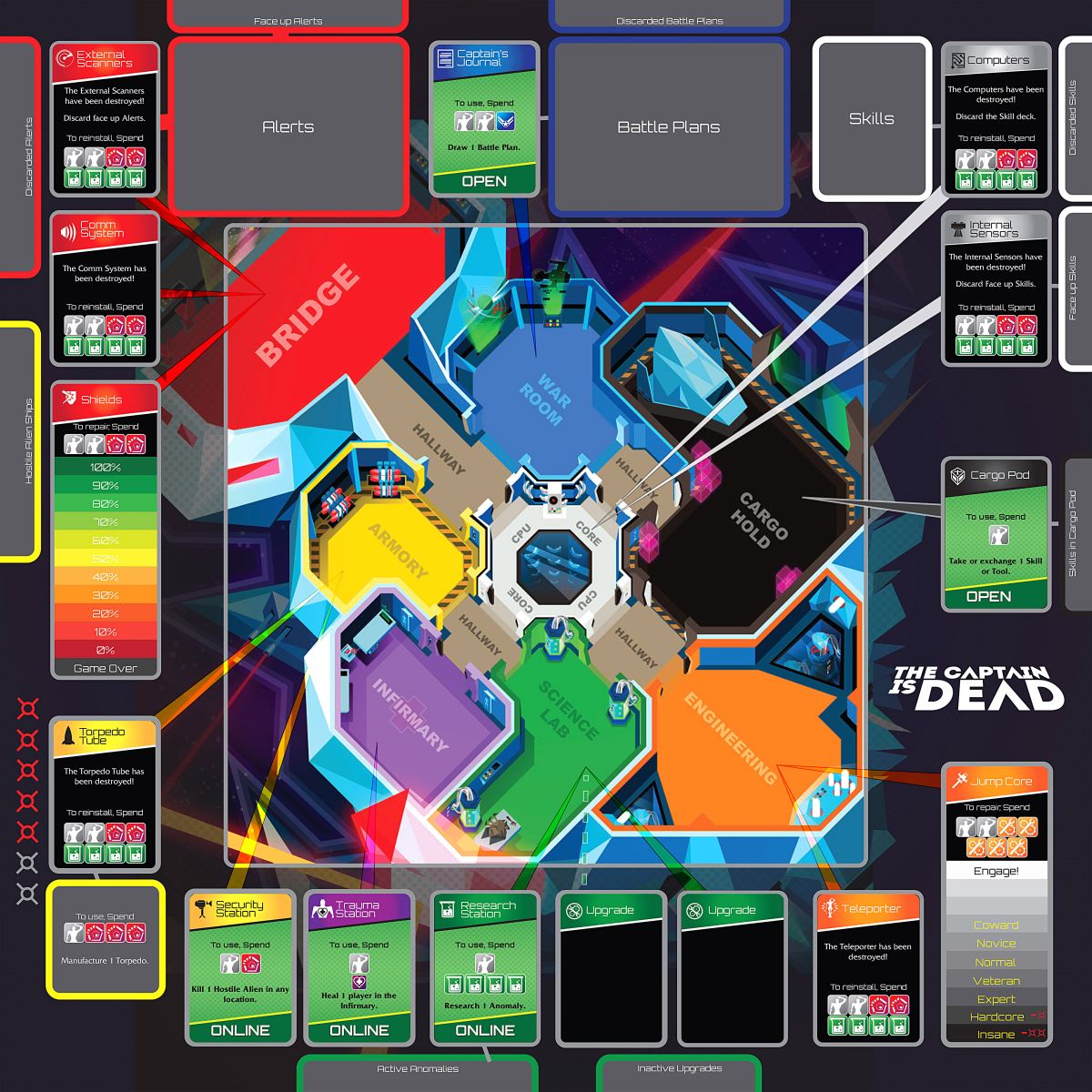 While the game scales brilliantly down to as few as two players, it’s worth eschewing the random assignment of player colours (each offering a handful of different roles for players to choose from) during setup with smaller groups at least the first few games through, as we felt not all of the characters were equally matched. If you can gather a bigger group, you will get to experience more of the game, as the ongoing effect of random anomalies can have a significant impact on players’ actions but are discarded when playing with just a pair of people. Difficulty can be neatly scaled in both directions by increasing or decreasing the number of jump core repairs required to win (and removing torpedos on the very highest handicaps), but even normal provides a fair challenge.

Not all players will love The Captain is Dead – as undestroyed alien ships begin to stack up the damage dealt and crucial systems explode, a match can quickly be lost with little chance for recovery, and the largely random element of skill cards can be frustrating if luck isn’t on your side. The player-specific abilities feel fresh and offer plenty of variety, but effective teamwork is paramount to surviving, opening the door for disgruntled or controlling players to try to take the captain's chair and command others.

For most, though, these very minor quibbles (which occur in plenty of other games) will be dwarfed by the massive potential for fun that every element of the game lends itself to if you’re willing to simply enjoy the experience. In the words of Captain Jean-Luc Picard: make it so.

The Captain is Dead won’t suit those who can’t stand being beaten – even unfairly – as the random elements conspire against you. If you can accept that, you’re in for a real treat of entertaining theme and simple, dynamic gameplay that you’ll want to introduce to all your friends and play time and time again.