The Batman Who Laughs: Rising Board Game Review What to do with a tie-in game? Often we can feel game designers pushing against the restrictions of a movie, comic or cartoon world with some disappointment. If only, we sometimes think, the designer could do what they want. Well, here’s what happens when they can.

The Batman Who Laughs: Rising is a DC multiverse villain from another universe where the Dark Knights – all various Batman-plus-bad-guy combinations – are attempting to destroy Gotham City. Don’t worry though, the real Dark Knight, the Green Lantern, Wonder Woman and Hawkgirl are assembling teams to fight back against this reality-ending nemesis. 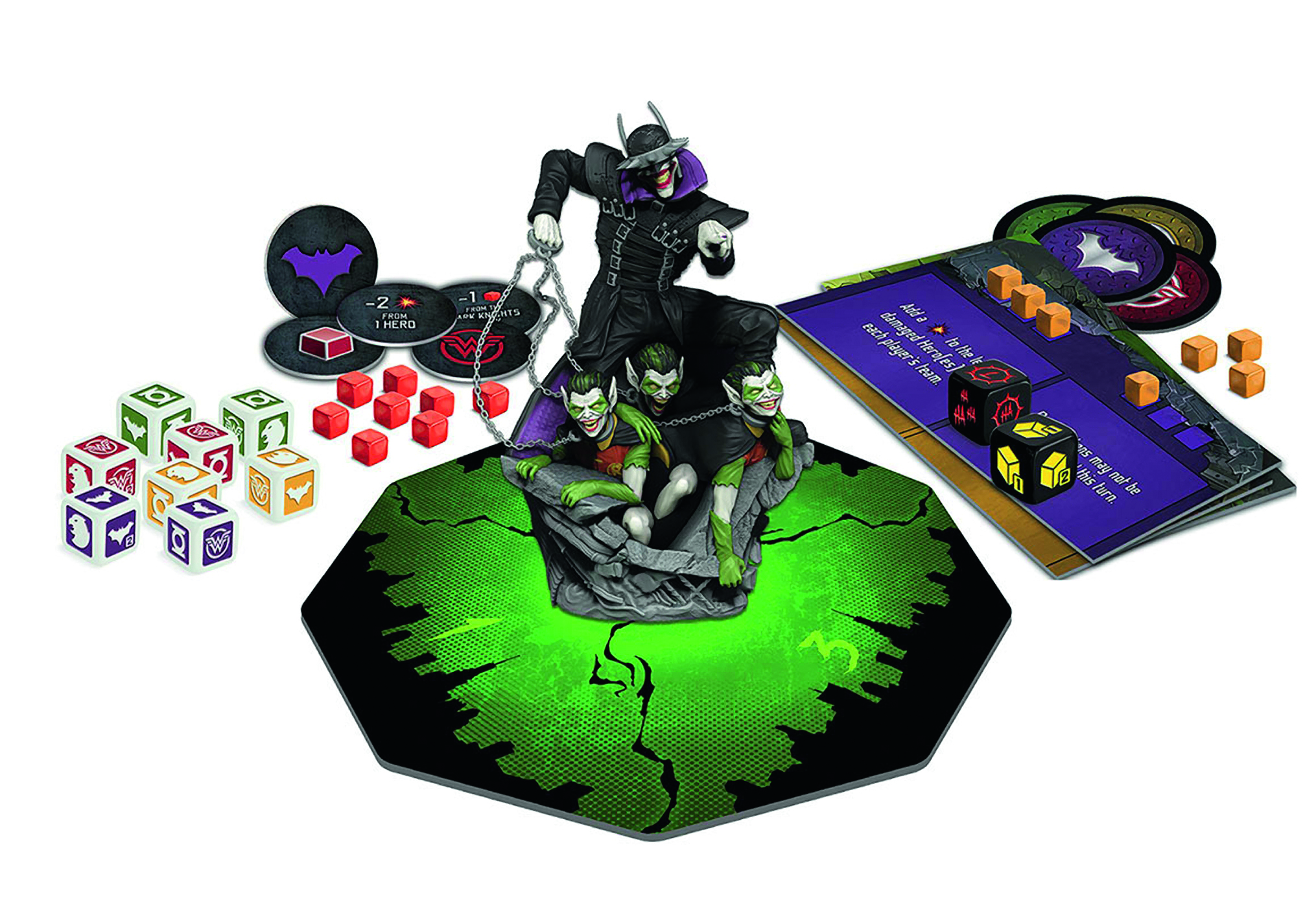 The system remains very similar to the other Rising games, in that you place your action chip in one of the three segments of the board, roll the dice to see where the bad guy is going to face and what they’ll do, and then roll your own dice. Your own dice are for spending to activate powers on the hero cards you already have in front of you, or for buying heroes from the zone you’re currently in.

And you better be quick with that, because The Batman Who Laughs is going to inflict damage on everyone in that area, including those in the market. He’ll also trigger any powers in that area if there’s any villains or Dark Knights present, causing a whole host of damage or trickery.

Soon you realise that keeping a lid on the bad guys in any particular area is a must, as is bolstering your team. Doing the latter will sometimes give you access to more dice, or situational powers, but it will also cause you to draw from the heroes and villains deck, meaning there’s a chance you’ll draw a villain into that spot, making it all the more dangerous for everyone there. On top of this, players will be adding tokens to The Batman Who Laughs track, which puts additional limitations on the players each turn once each section is filled.

Strangely, despite the darker tone and more interesting collection of enemies and heroes, this feels like one of the easier Rising series games. This isn’t really a criticism, there’s ways to make the game harder, and it’s possible we were just very lucky on our playthroughs.

If you like your alternative universes, your comic book what-ifs, then in The Batman Who Laughs: Rising there’s something pleasing about putting together a weird and ramshackle team to fight back. Plus, the huge sculpt – which includes real chain-leashed Joker-Robins – is going to be worth the price of admissions for collector anyway. For everyone else, this is a beautifully and thoughtfully put together family friendly game, despite the 15+ on the box.

Seasoned players might get the hang of it quite quickly, but there’s plenty of challenge to be had in this box. Also, if you’re someone who likes to collect DC Multiverse items, you’ve already got this on your wishlist.

TRY THIS IF YOU LIKED Last Bastion…

While The Batman Who Laughs: Rising is a step down in difficulty than this reskinned version of Ghost Stories it does offer accessibility and an incredible aesthetic.